I haven’t really done a post like this yet. There was an awesome day in Leon, Mexico that I shared, but below I’ll share what Saturday, January 14th was like for me. It was a great day, which gave me the idea to do this post, but not all that atypical either.

I woke up naturally at 8am, which is always nice. There is some construction happening a few doors down from the house I’m staying in. During the week I’d wake up at 6:30am to the sound of hammering. It was nice to wake up to the sound of.. nothing!

I made myself a nice big cup of coffee, relaxed, and searched online for things to see/do in Medellin. I discovered El Castillo, a castle/museum right here in Medellin! The plan was to head there in the morning and then walk to a café in El Poblado I read about online.

I left the house I’m staying at and enjoyed the nice view from the porch.

Great View From The House

I took a bus from the house to the metro station. At the base of the metro station there are street vendors. The day before I bought a slice of payapa and pineapple from a nice guy for 2000 Pesos/$1.08. I started up a conversation with him saying that the fruit was so good yesterday that I had to come back again today for more! This time I got a cup of mango slices and a slice of pineapple for the same 2000 Pesos. He was grateful for my business and I asked if he’d be back tomorrow morning. He said he’d be in another place, but we made a breakfast fruit date for 8am on Monday morning! 🙂

I took the metro and 14 stations later I arrived at Aguacatala station. Inside the station there was a bakery. As I’ve mentioned before, I have a soft spot for guava. Lucky for me, every bakery here has some form of bread or pastry filled with guava paste.

I placed my order and then noticed something that seemed to have fallen from heaven. It’s called pera de mani (pear of peanuts). Strange name, but they said it was lactose free (after my first bite I took a pill as I think they were wrong). These two pastries and my coffee was a solid second breakfast! The pera de mani was really heavy, but insanely good.

Heading To The Castle

It took a while to get my bearings once I got out of the station, but I figured out the street I needed to be on and started the arduous uphill climb. Along the way I saw a tree that was very symbolic. It reminded me of something very important. Mother nature always wins! I wish we were nicer to her…

I also found a tile on the sidewalk with my initials! How strange! Even stranger is that across the street on the way back there was another tile with my initials painted on it. Maybe my Colombian doppelganger Adán Pérez put them there? Later on in the day, I found a house that had an address that corresponds to my birthday in the American format (month-day). 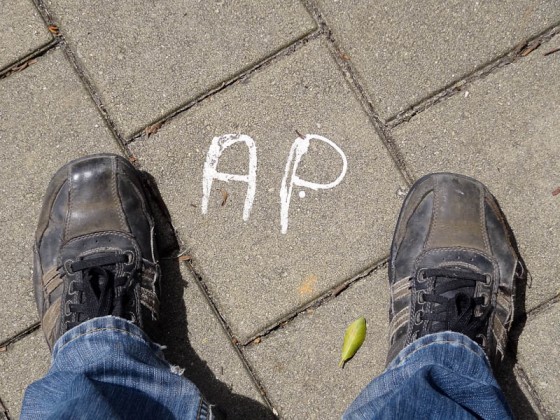 My Initials On A Street Tile

My Birthday As An Address

Hairy Trees At The Castle Entrance

After a scenic but tough uphill climb, I reached the castle. There is a separate post about the castle and its awesomeness here, but something awesome happened. As I walked down the cool driveway lined with hairy trees, a van from the newspaper El Colombiano went past me to the castle. Hmm…

As I paid the 8000 Pesos/$4.40 to enter the van entered the premises. I sarcastically snickered to the ticket seller that the press doesn’t need to pay? He said no, they were just there to take pictures.

When I got to the castle’s entrance, the receptionist told me I couldn’t take pictures inside. This bothered me a bit, though I don’t know why. Nevertheless, I left my backpack there as it was obligatory and headed to the bathroom. Coffee is never kind to my bladder.

When I came back, a guide in the castle asked me to come with her for something about photographs. She spoke really fast and I didn’t catch everything, but I quickly realized they were asking me to be a model in the pictures for the newspaper. I had to look at the exhibits and the photographer would take pictures. I told the photographer I’d be happy to play along as long as he gave me a minute of his time afterward.

After he took his pictures, I gave him my card and told him what I was doing in Medellin and about the awesome organizationI am volunteering with. He was definitely interested both in my story, and that of the organization and its inspirational founder, Marcos. He took down my phone number and Marcos’s. Let’s see if they contact us, but it’d be great to give Marcos some local publicity as what he’s doing isn’t as well known in Medellin or Colombia as it should be!

This chance encounter turned into this newspaper article!

I took a million pictures in the castle gardens and then left to head to the neighborhood of El Poblado. Along the way, I passed by a gigantic mall with a supermarket. I needed to buy a few things so I went inside.

Medellin has perfect weather, and it’s awesome to see that the mall is completely open to the outdoors. There is no door, for example.

Inside the supermarket, I took some pictures of some of the exotic fruit here. There are more exotic fruits here, but it gives you an idea.

As I was leaving the mall, something funny happened. There were two security guards talking and as I approached the exit, one started walking toward me. She turned her head and yelled with a smile to the other security guard “No English!”

I was right next to her at that point, so I said “Si English!” I asked her what was up and she said there was someone who needed help that only spoke English. I said I could translate if she was still around, but she already walked away. I guess the story isn’t funny when I write it here, but we were both laughing as we talked to each other.

I left the mall and walked down Avenida El Poblado. I think it’s the wealthiest part of Medellin. It certainly seemed that way with all the cafes, restaurants, bars, and shopping centers along the way. It was a bit hot as you can see in the picture to the left (31C = 88F). It was sunny. But I don’t mind such weather and that is considered a very hot day for Medellin – the city of eternal spring.

Otherwise, a few other pictures from the avenue.

Zona Rosa is like the nightlife part of Medellin. Located in the neighborhood of El Poblado, it is the area surrounding Parque Lleres. I had been here before, but I found a really nice cafe/bar that had wifi (even in the bathroom, apparently) and an electrical outlet next to a vacant table. It was the fastest internet connection I’ve found in Medellin and I got a lot of work done. I also called my parents and talked to them for an hour and a half. It was a really nice conversation even though I had just called them the day before.

I had a really nice coffee there and had nachos for the third day in a row. This place serves Micheladas, a wonderful Mexican drink I haven’t had since I was in Xela, Guatemala.

While there, I got confirmation that the following day I’d meet up with someone I went to business school with. Awesome! And Jasmine from JasmineWanders.com is in town and we decided to meet up in the coming week. Exciting! I started searching for volunteering opportunities in Cali, Colombia and Ecuador. I also worked on my blog and made a new and improved footer for my emails.

There weren’t many people there and it was just nice to sit in the cafe, which has no walls, in the perfect weather, breathing fresh air, listening to 1980’s hits, watching other patrons celebrate when goals were scored during some soccer game that was on, etc. I just felt alive.

On the way home, I got on the metro and was witness to something strange. The metro was crowded, which is normal. There was an older gentleman standing up holding on to the railing attached to the ceiling. There were two girls in their young 20’s that were very touchy-feely with him.

At first I thought they might be his daughters. But they weren’t. They were just playing a game, apparently, and were taunting him. They’d hug him or stand very close to him, etc. He was a good sport. When a seat opened up he took it. But the girls continued taunting him by staring at him or being provocative toward him, etc.

I just ignored it, but pretty strange. Otherwise, I got back to the house, took a shower, worked a bit more since I’m more effective at night, read a bit, and went to bed at 11pm.

A full day, yet lots of time to relax. Met interesting people and had fun, yet got my “work” done. Spent a lot of time outside and in nature, yet was never overheated or tired. A day full of value, yet cost less than $15 including the castle entrance fee. A day in the life of The Happy Nomad… 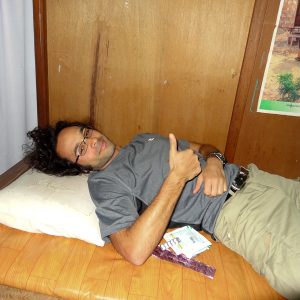 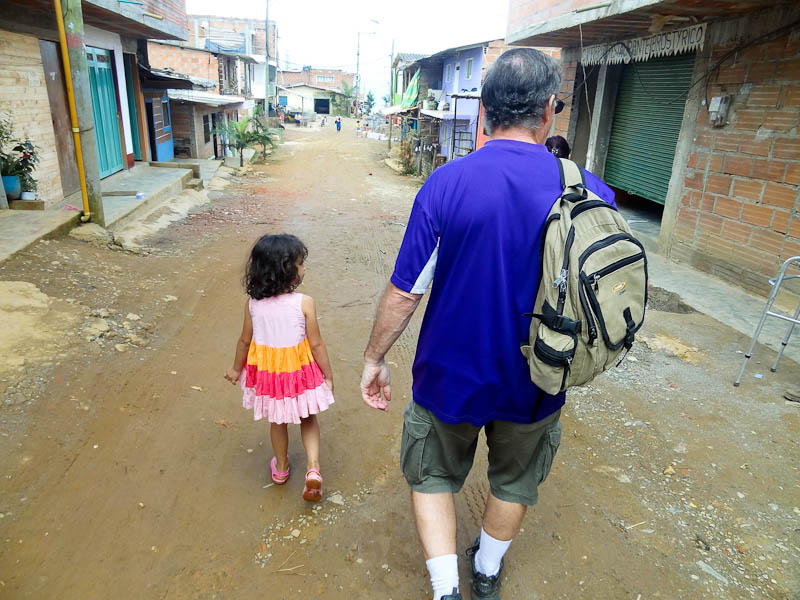 How The Happy Nomad Tour Rolls – Winging It
5 replies

El Castillo – A Castle And Wonderful Garden In Medellin, Colombia
Scroll to top