The Scene Of The Imaginary Crime

On my last full day in Venezuela, I entered a grocery store to buy a 1.5 liter bottle of water. It’s common in Latin America to have to store any bags or backpacks in a locker before going into the store. From their point of view, it reduces the chance of theft. From my point of view, it increases my risk of something being stolen.

When I visited my awesome friend in Nicaragua, exactly that happened to her. She stored her bag and her ipod was stolen. The store had security cameras, so they saw that their employee stole it and she got it back.

Given that my backpack has, at any given moment, my computer, Amazon Kindle, passport, and other stuff I need, I hate storing my bag in stores. So I just enter confidently, with my headphones in my ears, and usually the security guard doesn’t bother chasing me down to store my bag.

In this case, I was approached from the back by the security guard and from the front by a store employee owner to store my bag. I often joke by saying “No soy un ladron” which means “I’m not a thief.” When they hear my accent and realize I’m a foreigner, it often disarms the situation.

I spent exactly 10 seconds shopping after checking my bag as all I wanted was the water. Then I waited five minutes in line as the least efficient checkout process I’ve ever seen took place. During these five minutes, I wasn’t really bothered though. Such instances are opportunities to practice The Power Of Now.

One of the consequences of being present in the moment is being more aware of one’s surroundings. This came in handy as, after I paid, got my backpack from my locker, and left the store, an employee and the security guard ran after me to accuse me of stealing.

Again, in the spirit of the now and my changed attitude toward life, the whole situation was funny to me. The lady at the cash register didn’t remember that I paid less than a minute ago? All you can do is laugh.

So, luckily I could communicate with them in Spanish, and I explained that I just gave her a 20 Bolivar note and she gave me a 10 Bolivar note and 1.5 Bolivars in coins as change. They asked for my receipt, but I didn’t have one. She didn’t offer one, and typically these stores don’t give receipts.

Since I was present, I realized that the 20 Bolivar note I gave the clerk had a corner that was ripped. I also remembered that she put it under a note in her cash register that I had never seen before – presumably an older version of Venezuelan currency. Armed with this detailed information, it was very clear I had paid and wasn’t doing anything mischievous.

Plus, if I were to steal something, which I never would of course, I’d go for something a little more valuable!

A Day On The Happy Nomad Tour – Castle, Journalist, Cafe, And Fun! 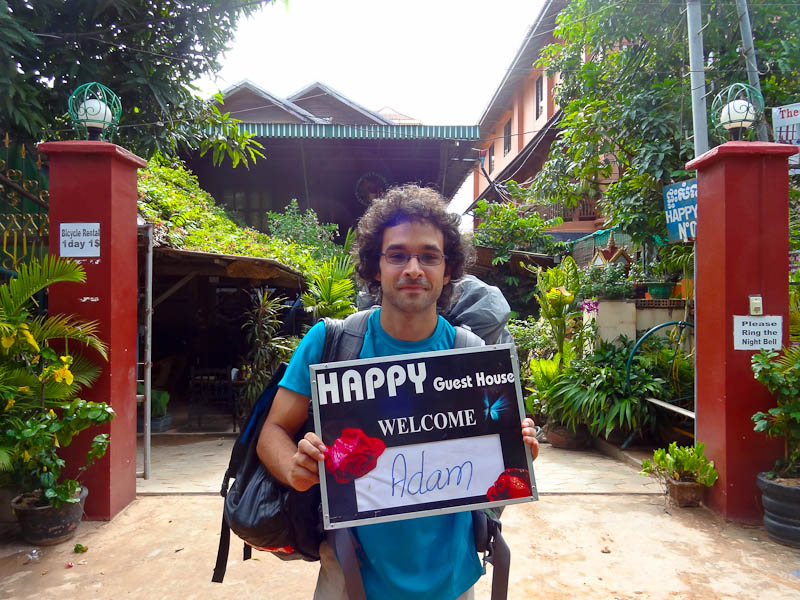 Photo Friday – A Guesthouse Made For A Happy Nomad – Siem Reap, Cambodia
2 replies