I headed to Armenia with a very specific mission: speak at TEDxYerevan. My first full day in Yerevan was spent at the rehearsal and my second day was the event itself.

Unfortunately, I spent so much time preparing for the speech that I didn’t really pay any attention to what to see and do in Armenia. After the talk was over I was exhausted. I hadn’t slept well for many days before the event and it had all accumulated. In the end, I didn’t explore much of Armenia and it’s my fault. I hope I get a chance to return someday and see this beautiful place properly. 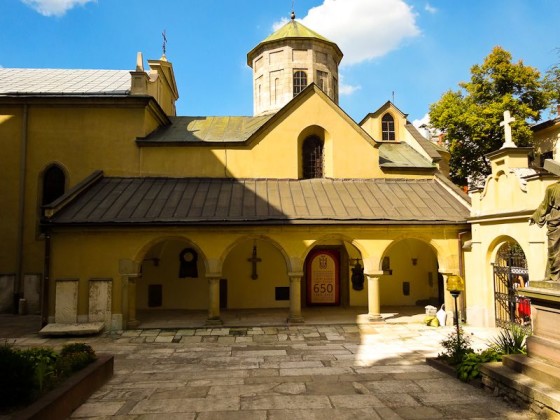 Armenia has a gigantic diaspora. Travel in this part of the world and you’ll find Armenian churches far and wide. For example, the church to the left was in Lviv, Ukraine and it was celebrating its 650 year anniversary.

The diaspora existed throughout the centuries, but it was elevated to unprecedented proportions due to the Armenian Genocide. You can read about it here. As people fled Armenia during the genocide, many went to neighboring countries Iran and Georgia. Many more went to Europe and then on to the U.S. It is estimated that there are twice as many Armenians living outside Armenia as living inside Armenia. Even the population inside Armenia is in doubt. When I asked around, everyone said the official number is about 20% too high, as people continue to leave to find greener pastures.

At the same time, many diasporans are coming back to Armenia. Programs such as Birthright Armenia have helped subsequent generation diasporans reconnect with their roots through volunteer projects. Others have found the slower pace of life, supremely high level of safety, culture of family values, and business opportunities a reason to relocate to Armenia. Sadly, when I was there Yerevan was full of the Syrian diaspora community. Previous generations fled Armenia for safety in Syria and now a few generations later they are returning to Armenia to flee the violence occurring in their adopted homeland.

Random trivia, sad as it may be, the word genocide was invented in 1943 to describe what happened to the Armenians. Sadly it would be used to describe several similar incidents throughout the 20th century.

Only 20 countries have officially recognized what the Ottoman Empire did nearly 100 years ago, Uruguay being the first in 1965. 43 U.S. states have officially recognized the genocide and many U.S. government documents call it a genocide, but it has never officially been declared a genocide. It almost happened in 2007 when the U.S. House Committee on Foreign Affairs voted to recognize it as a genocide. A bill was never passed, however. Turkey recalled its ambassador immediately and the White House thought Turkey might restrict its airspace to U.S. military planes – ironic that the U.S.’s ability to conduct war prevented it from recognizing what Armenia went through during World War One.

Below are some pictures of the Armenian Genocide Museum.

Yerevan reminded me a bit of Vientiane, Laos. In both Laos and Armenia, the capital city is right on the border with another country. In Laos’s case, it’s Thailand. In Armenia’s case it’s Turkey.

Armenia overwhelmingly uses Mt. Ararat as its national symbol. But through the course of history, Armenia lost its symbol to Turkey. The mountain is clearly visible from Yerevan and perhaps serves as a painful reminder of the hardships Armenians have gone through in recent and past history.

As I headed away from Mt. Ararat to the village of Ashtarak, just northwest of Yerevan, city life disappeared quickly and yielded to village life’s slower pace. I went with a fellow TEDxYerevan speaker to the event organizer’s mom’s place. It was, by far, the best food I had in Armenia. It was truly incredible and I enjoyed every bite.

The village is home to churches hundreds of years old. One is even over 1000 years old. In the year 301, Armenia was the first nation in the world to adopt Christianity as its official religion. I truly love how simple the churches are in this part of the world. I can’t help but think how appalled Jesus would be if he saw how over the top so many churches are in European capitals. I think he’d give two thumbs up to the simple Orthodox churches in Georgia and Armenia though.

A stream flows through the village and there were some historic buildings onsite that used the flowing river to power flour and wine production.

A Hotel Next To The River

The Village With Mountains In The Background

No place is perfect and Armenians were quick to point out all of Armenia’s faults. There was a widespread belief that the grass is greener on the other side – that success was obtainable only beyond Armenia’s borders (which are closed by the way on the Turkish and Azerbaijani sides creating very isolating conditions). It was sad to see such a pervasive attitude, but hopefully the returning diasporans can inject a sense of pride into Armenia that it badly deserves (and perhaps convince the government to pass some no-smoking laws…please…)

Can you imagine getting in a form of public transportation and handing your purse or backpack to a random stranger sitting down while you stand for the duration of the journey? How about your baby? That’s how Armenians roll, literally. When boarding a marshrutka (15 passenger van that acts as a bus and usually carries way more than 15 people), if no seats are available it’s customary to pass your purse or backpack to seated passengers to allow for maximum comfort while standing and maximum space usage. I constantly heard “Only in Armenia” while there, usually referring to something negative. Although other capital cities on earth are as safe as Yerevan, I wish they saw how incredibly amazing this public trust is.

I really liked Armenia and I enjoyed getting to know its people. Below are some other pictures from my time there.

An Uncommon Sign In This Part Of The World

Taxi Meter In The Mirror – Genius!