The Land Of Runners

I arrived in Ethiopia not really knowing what to expect. I knew very little about the country before I decided to come here. While I was in Lebanon my friends there kept ranting and raving about Ethiopia. I decided to come and I did a bit of preliminary research. The history seemed interesting. It was the second country to declare Christianity its national religion – leaving humanity some amazing churches in the meantime. Mohammed’s followers were welcomed as refugees by the king of Ethiopia, making Ethiopia important to the story of Islam. Ethiopia was never really colonized either, unlike every other country in Africa. As a child I remember Ethiopia being associated with hunger and starvation.

That was about all I knew.

This is why it’s so important to travel. Although I wouldn’t say my views about Ethiopia were guided by stereotypes, when you arrive in a place you can’t help but be confronted with new information and sensory inputs that challenge what you thought you knew.

I arrived in Addis Ababa and went to my wonderful couchsurfing host’s apartment by taxi. At the entrance to the apartment complex a security guard got in the taxi and went with us so he could show me which building I needed to go to. It was the first of many, many nice gestures the people here performed.

Africa Street In Addis Ababa, Ethiopia And A Belching Bus

When I went out for the first time I took public transportation to one of the main points in town. From there I walked to find the Djibouti Embassy. Within a couple minutes of walking down the road, three young boys no older than eight years old came up to me. Two boys were empty handed and one had something in his hand about twice the size of a clipboard.

The boy on my left was begging while the one on the right, clipboard thing in hand, put it next to my waist as he tried to stick his hand in my pocket. I was warned that this could happen so I was ready for it. Plus they did a poor job. I swatted the boy’s hand away, looked angry, and they went away. The nice part about starting the day (and a new country) off on a relatively sour note is that this can only get better. And things did get better, of course.

There is poverty here, no doubt. There are beggars on pretty much all the main streets. Some have physical deformities making it impossible for them to work, others are mothers with children who for one reason or another find themselves on the street, elderly men, and there are street children who live on the street as well. Although this sounds terrible, I expected it to be worse. The poverty (as defined by number of beggars on the street) was less than in many of the places I’ve been – including Europe or the U.S. And there was solidarity, as  I saw many local people gaving to those in need on the street.

We All Scream For Ice Cream

The people here are incredibly beautiful. Let me rephrase that. The girls are incredibly beautiful. I don’t know about the guys. But I really wasn’t expecting this. There are many shades of skin color, many kinds of faces and bodies, and all seem to be beautiful. Someone explained that the people are a mix of Arab and African, but I still didn’t fully understand as the Sudanese and Somalis (both are neighboring countries of Ethiopia) should have the same composition. In any case, the girls are fantastically beautiful and I was awestruck. It’s joked that the African Union placed its headquarters in Ethiopia because among the 54 countries in Africa, Ethiopia has the most beautiful women and the delegates are usually men.

Muslims and Christians have been living side by side for hundreds and hundreds of years. Many families are mixed and it’s truly a thing of beauty considering the religious divisions that have caused so many problems in other parts of the world.

Security is tight here. Almost every building has security guards and they do a pretty thorough inspection, really going through each pocket in my backpack and inspecting everything.

The people are incredibly kind. So many people have gone out of their way to help this crazy-haired nomad out it’s hard not to fall in love with such a place. I’m forever grateful and look forward to even more meaningful interactions with the beautiful Ethiopian people going forward!

Where The Village Meets The City

Helped By An Ethiopian Angel 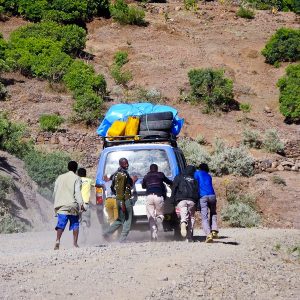 Stuck In The Middle Of Ethiopia – 4 Days On Buses For One Day In Lalibela!

Not Getting Arrested At The Khartoum, Sudan Airport, Thankfully

Helped By An Ethiopian Angel
Scroll to top