I had heard of “The Hub” while doing my MBA at IE Business School. A hub is a shared workspace where entrepreneurs can have an “office” to work from with varying amenities. Some offer conference rooms. Most hold events somewhat related to entrepreneurship/technology as well as social and fun events. The professional events may be about refining your pitch, aspects of business that technical people should learn, or companies coming in to educate developers about their tools/products.

The idea is to get talented people in the same room and let things flourish. It may sound more chaotic than it is. With a pair of headphones you can be in as private a space as you’d like. And each hub has one or several heavyweights in its corner as a supporter (think Microsoft, Google, etc.).

Each hub has different rules and memberships. Some have free membership plans, others don’t. It really depends. But for an entrepreneur looking to move out of his/her garage, this is a great first step and a way to network.

I was fortunate enough to visit several hubs.

Each of these hubs has its own story, with successes and failures galore.

I spoke with one of the employees at iHub Nairobi and she shared two of her favorite success stories.

MFarm Kenya – This company has removed the stubborn middle man in farm transactions. In the traditional way of doing things, a farmer would sell his crop to a middle man for quite a low price. The middle man would transport the produce to the city and sell it to vendors there, taking in the majority of the income in this three step process. MFarm eliminates the middle man. With a cell phone farmers can send a text message (SMS) and find out the current prices of a variety of inputs as well as finished produce. They can also sell their produce to the market, avoiding a middle man, and paying reasonable prices for transport. MFarm created a market where there wasn’t one before and empowers those at the bottom of the food chain (pun intended) by allowing them to sell directly to the market and having current market prices at their fingertips.

Kopo Kopo – Kopo Kopo leverages the existing mobile payment market in Kenya, perhaps the most developed in the world. Though the system to send money from one person to another is fantastically simple and inexpensive, almost no businesses accept mobile payments. Kopo Kopo stepped in to facilitate these mobile transactions, taking just 1% for the convenience of allowing customers to pay using their cell phones.

I felt it was necessary to share this story for a couple of reasons. First, Africa is full of hope. People in Africa are optimistic that their best days are ahead of them and people are actively out there trying to forge a better future. The examples above are two such examples.

Similarly, these hubs foster African solutions for African problems. Foreign aid has shown that imposing solutions from outside often doesn’t result in the desired outcomes. But providing the resources so that others can reach their full potential and do the good they feel it is their mission to do – that’s the goal of these hubs. Empowerment. Plain and simple. 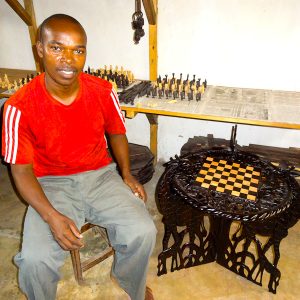 Visiting Eldoret, Kenya On A Whim