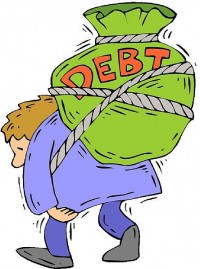 I’m sure anyone in debt reading this will read this and think “easier said than done.”  Fair enough.  Some debt can be necessary.  It would be hard to become a doctor or lawyer without taking student loans.  Frankly, it’s hard to pay for college in general without taking loans.  Then there are cars, houses, etc.

Debt is a necessary evil.  And it has its place in society.  But debt can also cause extreme stress and hardship and feel like a 100lb boulder you are constantly carrying.

To me, the absence of debt is freedom.  How many people are working at jobs they hate just because they can’t afford to pay off their debt by doing something else they’d actually enjoy?  That is just one example, but debt is the hidden character in most people’s lives.  It is there for you when times are tough and you need a bit of financial assistance to get by.  It’s also there for you when you want to own a home to raise a family.  Sadly, it’s also in your wallet should you get the pressing impulse to buy a new iPad

, a new pair of shoes, or some other budget-busting want.

This is not a blog to deal with how to get out of debt.  My goal is to make you think about how much debt affects you and the decisions you make.

Do you feel worthless under a mountain of six-figure debt?  Don’t!  First, you are not alone.  Second, you can get through it.  And third, as my dad always says, “It’s only money.”

I think getting out of debt is one of the biggest actions people can take to bring upon a happier life.  Again, the freedom and independence of not being in debt can’t be beaten.

How can you get out of debt?  For one, live more simply.  No one likes to hear this.  But it’s true.  Somehow we’ve been sold the idea that consumption will make us happy.  It doesn’t.  We’ve gone from the biggest creditor nation in the world, to the biggest debtor nation.  So this is true on both a nation-wide level as well as an individual level.

I could go on and on about living more simply, as I live as simple as possible myself, but we’ll save that for another time.  Consider renting instead of buying.  Really think if some things are wants or needs.  Avoid buying wants.  Stick to a budget.  Stop using credit cards.  And stop eating out.

Again, I’ll discuss ways to simplify your life in more detail later, but for now keep those in mind as food for thought.

Once you’ve simplified and downsized, which is not easy since society is constantly telling you to upgrade and supersize, you can devote more effort into paying off your debts and getting closer and closer to freedom.

In the middle of this financial crisis, it may come across as insincere or condescending to say to get your financial house in order.  No, not at all.  Life is a journey and everyone makes mistakes.  Luckily, my mistakes in life have not been financial. But I can promise you that I’ve more than made up for my lack of financial mistakes in other areas of life 🙂 I realize that through no fault of your own you can be up a creek financially – especially when it comes to healthcare issues.

This is an inspiring video of how a couple downsized and ended up being both happier and debt-free in the end.  Their story may not be relevant to your own, but it doesn’t hurt to watch and think!

Take the plunge and regain control over your life!  Nothing is impossible if you try.  I promise.

What do you think?  Have you dug out from underneath a mountain of debt?  Share your story in the comments below!

Is Career Happiness And Satisfaction A Myth?

Some Inspirational Advice For Whoever Wins The Election Today
4 replies

Go Outside!
Scroll to top