It’s inevitable. Most people I talked to said upon entering India you’d have to spend a week on your back (when not in the bathroom) fighting evil microbes you never knew existed.

In my case, I was in Nepal/India for six weeks before these microbes struck, and strike they did!

After the amazing experience at the Golden Temple of Amritsar I caught a train to Jaipur, Rajasthan’s capital and crown jewel. The train departed at 5:50pm and was to arrive at 7:30am the following day.

I tried sleeping, but between the copious farting and rampant snoring, it was difficult for me to get any sleep. But, alas, I did fall asleep…

Until 12:30am when I woke up and had to run to the bathroom. My stomach had felt uneasy up until that point, but I thought maybe it was just mild motion sickness due to the train’s movement.

Nope. That began a series of running to the Indian train’s bathroom, purging from both ends, and a weakness I thought would cause me to faint. At times I stayed in the bathroom longer than necessary because I didn’t think I had the energy to return to my bunk.

The day of departure I thought I did everything right. I ate breakfast at the temple, which seemed to be serving hygienic food and where I had eaten several times already without incident. I had lunch at India’s biggest coffee shop chain, again, presuming good hygienic standards. For dinner I bought packaged cookies and biscuits to be safe. I have even brushed my teeth the entire time here with bottled water or reverse-osmosis treated water. But no, something didn’t agree with me.

After several trips to the bathroom I went to sleep around 4am. I woke up at 6:45am and felt a bit better. I didn’t need to run to the bathroom and I didn’t feel as terrible or weak. I was still very weak though. At the station I bought some mango juice and caught a rickshaw to where I was staying. Luckily, the girl I was to couchsurf with was out of town and she didn’t have to see me at my worst. I also didn’t have a lot of energy for pleasantries and small talk. I needed to sleep and rest.

I rested the whole first day and most of the second day. I reintroduced solid food and got my energy back by mixing electrolyte packets with water.

As I think about it now, I think I hit rock bottom in that train’s bathroom. Really, I haven’t felt that miserable in a long, long time. I was shaking, trying to decide if I needed to face the toilet from the front or back, worried I might faint and make a mess of myself. Yet I was thankful.

Yes, in the depths of my despair, I couldn’t help but feel thankful I was on a train instead of a bus. The buses here have no bathroom inside and had such an episode occurred on a bus, I don’t know what I would have done. I guess I would have gotten off in the middle of nowhere to do my business and tried to hitchhike toward my destination. 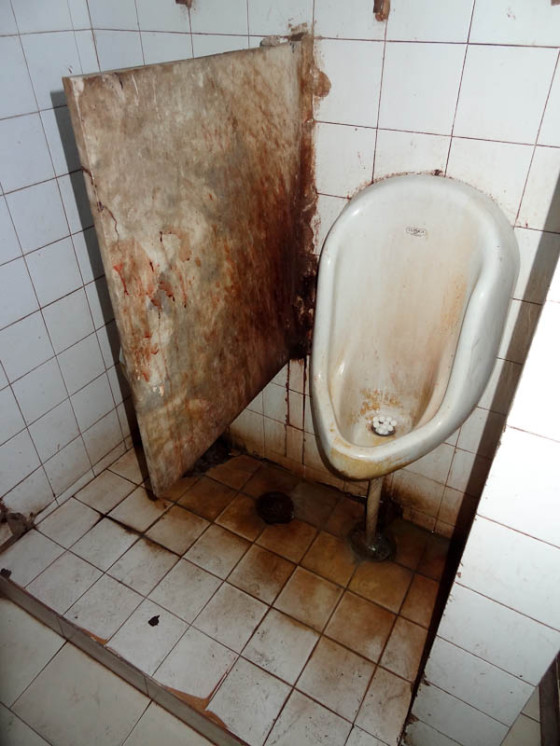 An Example Of An Indian Public Bathroom

I was thankful for the Indian squatting toilet. Public bathrooms here are notoriously dirty. I’ve yet to find a clean public bathroom and I’ve been here a while month now. But the beauty of the squatting toilet is that it’s hygienic by design. Again, this wasn’t my main concern at the moment, but it did run through my mind.

I was grateful that this was happening at night and that people weren’t banging on the door as I spent my 20-30 minute purging sessions in the bathroom. I had my peace and “let it be.”

I was thankful that this hasn’t happened more often. For how much I’ve traveled, you’d think this might happen more often. Yes, as I’ve mentioned before, I get my monthly period in the form of light diarrhea or a cold. This was no different as I caught a cold over the weekend and caught this train that Sunday – everything at once. But it really hasn’t happened too often.

And finally, I guess I was grateful for finding positivity on The Happy Nomad Tour. While in the bathroom I said to myself “this could have been much worse” and that’s how I chose to see things. Before I think I would have taken the other perspective, thinking how unlucky I was that this was all happening and getting upset about it.

I feel like life sometimes gives us opportunities to cut out all the distractions and peer directly into our souls. This was one such opportunity for me and I was happy to see what I saw. This trip has given me the opportunity to cleanse my soul through many experiences and through much contemplation. I choose to not see myself as a victim no matter what happens in life – there are only opportunities for growth.

A professor in college once said “It’s your attitude, not your aptitude, that determines your altitude.” I’m sure he ripped it off from someone else to sound smart. He ended up in jail for insider trading. But the quote still resonates with me and applies here. Your attitude really is like a prism for interpreting life’s events. The more you can harness that prism’s positivity, the more each day is a blessing regardless of what happens.

Can You Help Me Spread The Word?

A Simple Greeting, A Deep Transmission Of Love
32 replies

A Visual Tour Of Jaipur
Scroll to top