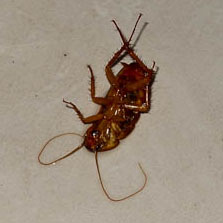 While in San Jose, I realized just how far I’ve come when it comes to my fear of bugs.

As I mentioned before, while living in Yoloaiquin, El Salvador I had no choice but to put up with bugs. I was living in the countryside and bugs were simply everywhere. Each night something frightening would end up in my room. Without a way to remove it, I had to get over my fear if I was to go to sleep.

A Spider And Its Web Above My Bed In El Salvador

I wouldn’t say I was comfortable about it, but I’d say I gradually became more and more comfortable. I’m in the tropics. Bugs are a fact of life. Getting over this fear of them helped me enjoy my time much more than otherwise in Yoloaiquin.

One of the things I advocate is constantly challenging yourself. It allows you to grow and develop as a person. For me, getting over my fear of bugs and spiders is more like a life-long endeavor as it’s pretty deeply entrenched.

But I came a long way in El Salvador. I realized this in San Jose, Costa Rica. I walked into the bathroom to take a shower. When I turned on the water, a cockroach that I didn’t see fell off the wall onto its back right in the showering area. I’m not sure why it fell off the wall as it wasn’t hit by the water. I guess I scared it.

Cockroaches have a hard time flipping back over once they are on their backs. For someone with a fear of them, it’s disconcerting seeing their legs in motion as they try and flip themselves back over.

So what did I do? Since it was far from the drain and not in the path of the water, I just continued taking my shower! I wasn’t nervous and I didn’t even have a reaction when I saw it fall off the wall. Huge progress!

After my shower, I grabbed my camera. I put my razor next to it to show the relative size of the cockroach and then took this picture. I’d say these cockroaches are about the same size as the ones I dealt with when I lived in the Middle East, but the ones here in Central America fly.

After the picture, I took a piece of paper and slid it underneath the cockroach. I took it outside and tossed it in the air so it could fly away.

I still don’t like bugs or cockroaches, but maybe this was my own proof that I can co-exist with them. And I won’t let my fear of them have any control over my life.

In my case, I was a reluctant participant in getting over my fear of bugs. I knew they’d be here before coming to Central America. But the cities here are relatively bug-free (at least compared to the countryside). I put myself in the position where I had to co-exist with the bugs in order to survive.

I think it was just the right challenge at just the right time. Of course, I wouldn’t skip the countryside because of the bugs. Missing the awesomeness of the countryside due to my fear of bugs would be unacceptable. Thus, challenging myself in getting over this fear opened up a whole new world to me – including a world where chickens set up a birthing station in the bathroom.. 🙂

What fears are holding you back?

In my case, I kind of attacked my fear from an angle. I think of it like a space shuttle. I think they have to re-enter earth’s atmosphere at a certain angle or they’ll burn up. Maybe I am remembering wrong, but just go with the analogy.

Sometimes we don’t need to attack problems head on. We can take our time, approach them at an angle, and achieve a better result.

In this case, I challenged myself by indirectly putting myself in the situation where there would be bugs everywhere. I did this knowing I’d have the wonderful experience of living in the Salvadoran countryside. It was a compromise worth making and a good challenge to overcome fears. But without this substantial reward, I probably would not have had the patience or determination to confront my fears. Confronting my fears had a direct and wonderful payoff.

Fear as a motivator

One of the biggest reasons not to take the plunge is fear. Even if you plan like crazy and know you’ll succeed, it’s only human to have some reservations. All I can say is that self-confidence is key and you’ll have more self-confidence if you have regularly challenged yourself to overcome your fears – big (like a six-inch moth) and small (like the omnipresent ants).

Bugs In The Laotian Countryside
3 replies

Entering Costa Rica And The Green City Of San Jose