Jodhpur was a city I missed my first time in Rajasthan. Why did I miss it? Well, I was horribly sick and had to rest up in Jaipur. This extra time to rest meant I missed Jodhpur and went straight to Udaipur. Luckily, I was able to visit on my way back up north.

The town of Jodhpur doesn’t have much going on besides the clock tower. Mehrangarh Fort is by far the main attraction. Some tourists do camel safaris from here, apparently they are cheaper than in camel-safari-hotspot Jaisalmer. There are lesser important tourist attractions too. For me it was a nice place to see a smaller Rajasthani town and an interesting fort.

The fort is over 550 years old and has never been taken by force. There’s an interesting museum inside the fort, and you get great views of the city from there. Some people still live inside the fort as well.

Something that surprised me was that in India there seems to be two kinds of places. In places that never see tourists, you’ll be analyzed and stared at as if you were an alien. The kids with more courage might say hi or use the few English words they know. Otherwise, you’ll be like a shunned Amish person returning home – no one will talk to you but everyone will stare at you.

On the other hand, there are tourist places like Dharamsala or Pondicherry where no one pays much attention to you. You are just another tourist, you help the local economy in an outsized way, but otherwise people have no interest in you.

Jodhpur was something in the middle. It’s frequented by tourists as it’s definitely on the Rajasthan circuit, and I saw tons of tourists despite visiting in mid-March – low season due to the extreme heat (about 100F/38C during the day). Still, so many kids would say hi and want to talk to me as I walked down the street, and adults would stare.

Rajasthan has a very different flavor to it. I don’t mean that in a food sense, though each state in India definitely has its own cuisine, but Rajasthan is just different. It’s extremely colorful, quite a contrast to the dusty, beige desert landscape. Many men wear colorful turbans, which you see nowhere else in India apart from the Sikh community. They also sport impressive mustaches as you can see below. The people are also known for being hospitable.

Before I share the pictures of the fort and the city, you might wonder why Jodhpur is called the blue city. You can see why below.

Why are so many buildings painted blue? Apparently, the brahmins, the priestly and highest caste in the Hindu caste system, painted their houses blue to distinguish themselves from the local population. Locals say the blue color keeps the bugs away and the houses cool. Some even say the houses were painted blue to represent water, which is obviously scarce in the desert. Whatever the case may be, the result is quite beautiful.

Below, the pictures and two videos of street performances at the end if you’re interested in hearing some traditional Rajasthani music. 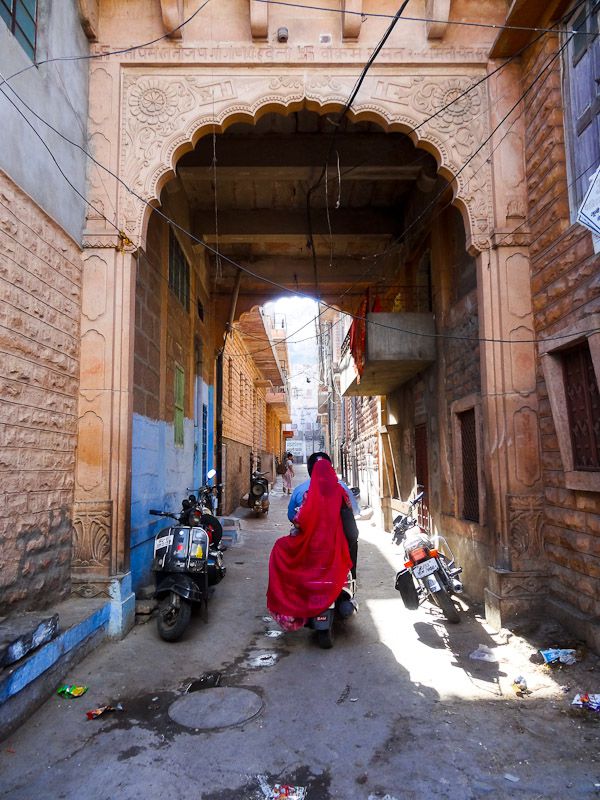 Napping In The Extreme Heat Of The Afternoon

With Some Street Performers