Pondicherry, or Puducherry as it’s known locally in Tamil, was the largest French colony in India. Located in the state of Tamil Nadu, somehow the French managed to hang on to Pondicherry until 1954, a full seven years after India got independence from the British.

Today it’s more famous for being the setting for the book and movie Life of Pi.

The French influence is very immediate there. Although full of the normal chaos of all Indian cities, there are French cafes and bakeries, French architecture, and steak! Yes, it was the first time I saw beef In India relatively out in the open. It was the same when I later got to Kerala.

You find a lot of French people who have settled in Pondicherry. There are also French citizens of Tamil/local origins who speak perfect, native French. There are a lot of tourists as well. The whole place is international due to the ashrams, especially Auroville, which I’ll talk about in a second.

Still, I guess I liked Pondicherry, but I thought I was going to fall in love with it. No love. But it was a nice place. I even rented a motorbike for the first time in India to explore. I survived, though it helped that the day I rented it there was a nation-wide strike happening and the roads were quite empty by Indian standards.

The thing I liked most about Pondicherry was the evening walk. At 6pm every night the road next to the sea is closed. I think it’s closed all weekend too. Everyone goes out to walk, shop at the market, and socialize. It’s nice and breezy next to the sea, which is welcome after the hot, hot days. People walk and jog. Sounds normal, but you don’t find a whole lot of exercise happening in India. It was just a nice atmosphere, and a far cry from the chaos and insecurity in places like Delhi and Bombay.

First View Of The Bay Of Bengal 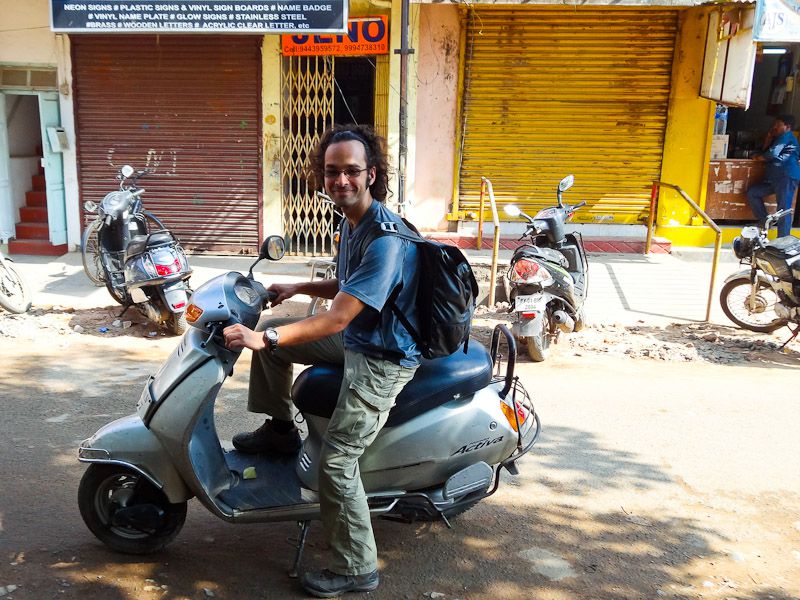 Setting For Life Of Pi

Founded in 1968, Auroville is a so-called “experimental” town. The founder’s first public message about his town was “Auroville is meant to be a universal town where men and women of all countries are able to live in peace and progressive harmony, above all creeds, all politics and all nationalities. The purpose of Auroville is to realize human unity.”

At the center of the town is the Matrimandir. It’s “a symbol of the Divine’s answer to man’s inspiration for perfection.” I have to admit it’s a very cool looking building. It’s difficult even for Auroville members to go inside, so it’s impossible for tourists. If memory serves me right from the video I saw there, it took almost 40 years to construct. It’s still under construction in a sense, though the area around it and not the Matrimandir itself.

Auroville was intended to be a community of 50,000 but less than 3,000 live there today coming from 43 different countries. It’s an interesting place, with an interesting vision. Below some pictures and you can find more information here if interested.

Flowers At The Entrance

A Week At An Indian Ashram

A Tour Of India’s Most Infamous Slum, Dharavi

A Visual Tour Of Jaipur

A Weekend At The Golden Temple
5 replies