My friend asked if I wanted to see a “Theyyam.” Whatever the case may be, living a life maximizing experiences, I always say yes. My goodness. I had no idea what I was in store for.

We arrived to see a couple hundred people gathered around a temple. Drummers were playing rhythmic beats and everyone was excited. We walked around and saw a hut where men were painting a face red. I figured it was part of the ceremony, but my friend was no help. As a Muslim, he was aware of this Hindu festival, but had never attended one before.

My Serious Face With The Performer

I got my picture taken with this guy and we were told we could go around back to eat lunch. Now, after all the stomach problems I’ve had in India, this did not seem like a good idea. I was hungry, but I’d rather be hungry than face stomach problems later.

My friend guaranteed I’d be fine and we went around back to check it out. It was hygienic by Indian standards (no soap, you washed your own dish after you ate, food was open to the dust and flies, etc.) and I decided to give it a try.

I should note that in much of India people eat with their hands. In the north of India people usually use some kind of bread (roti, chapati, naan) to scoop up food. In the south they just use their hand outright. Thus far I always used a spoon or fork to eat in the south. I can eat with my hand, I just prefer to use utensils. But there were none here so I took the plunge into eating with my hand.. 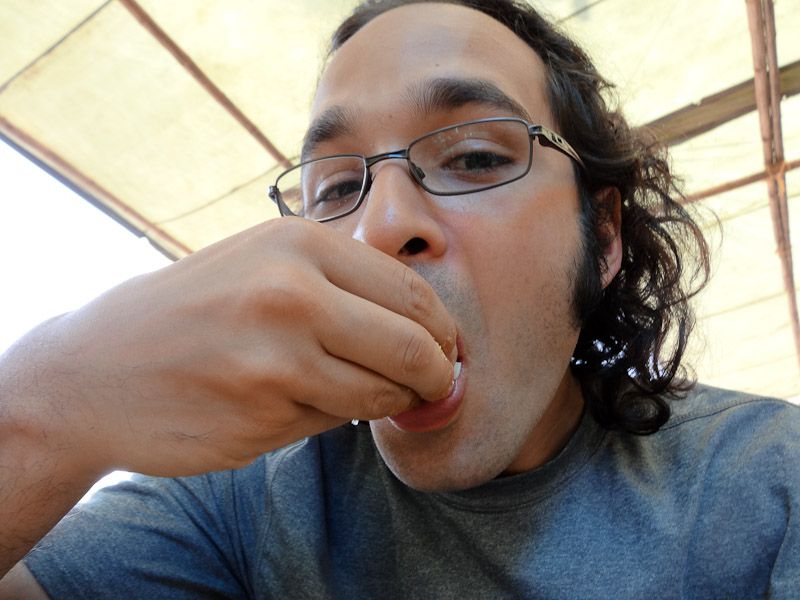 
After lunch we went back to the temple. The event was getting started. I had no idea what to expect. Unfortunately I didn’t capture many pictures because I took a video of the event.

First, the guy came out. They had to attach his.. I don’t know what to call it. His peacock thing in the back. After that was attached, they spent what had to be 10 minutes fixing his makeup. I say he and his. It was a guy, but as you can see, the makeup is applied to make him look like a woman. I later learned the makeup is very important so everyone knows which god/goddess he was channeling.

The Guy Comes Out 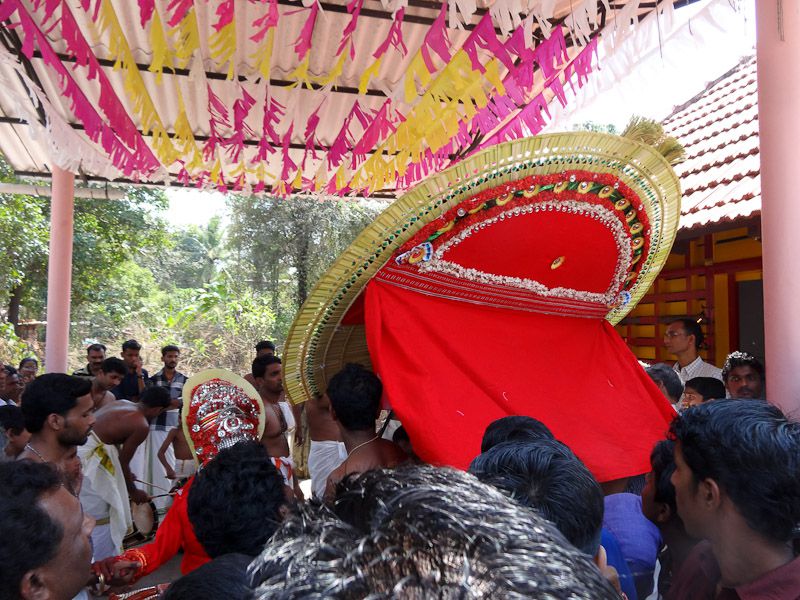 His Peacock Thing Is Brought Out 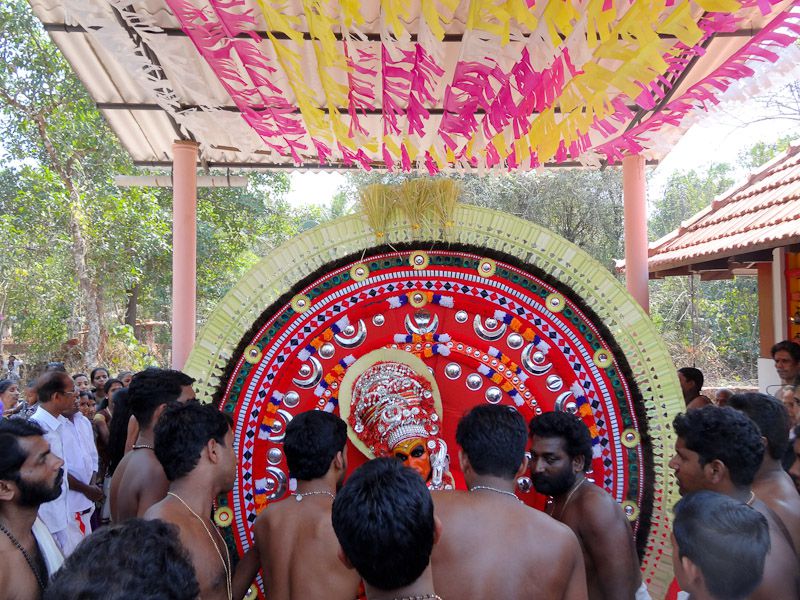 The Peacock Thing Is Attached

And then… things get wild. Watch the video below.

I can’t explain much about this festival. I don’t really know what it’s about. But from what I understand, the theyyam is a ritual form of worship that originated several thousand years ago. It only takes place in Northern Kerala, India. Those who perform in the ceremonies are the lower class of society, though they wield an important role in this ritual. It appears as though the people believe god is channeled through the performer during the ceremony.

The communities that perform these rituals are considered cults. It is believed that the roots of the ceremony originate from tribal times before Hinduism, back to the neolithic period.

Each temple and shrine in Hinduism has a patron deity. The performer channels the deity of the particular temple or shrine where it takes place. Although it looks like chaos above, the performer is dancing particular steps out that carry significant meaning. As you can see in the video, the performer wields several different kinds of weapons and the local young men do battle with him. I presume this acts out the age-old story of good triumphing over evil, but I don’t know for sure. All I knew was that when he came charging at me I had to get out of the way!

So, a totally unexpected but awesome experience in Kannur. I hope you found it interesting! More info can be found here.