Dharamsala is a special place. It can be felt while you’re here. Maybe it’s because the multicultural Indian community lives in harmony with the Tibetan community, maybe it’s the calming effect of the Himalayas, I don’t know. But after Delhi, this was tranquility at its finest.

I’ll be talking specifically about McLeodganj, the upper part of Dharamsala where the Dalai Lama lives. At 1750m/5750ft, the November air kicked my butt. It was by far the coldest place I’ve been on my trip, with daytime highs around 10C/50F and nighttime lows 0C/32F. There is generally no indoor heating and my $2.70/night room certainly didn’t have heating.

Still, this is the home of the Dalai Lama and the Tibetan government in exile. The place isn’t overtly Tibetan/Buddhist, but a nice harmony exists between the Indian and Tibetan population (at least it seems so).

The Tibetans I met spoke English very, very well. Many told me that it’s because international volunteers often come and teach English in their schools. That, combined with tourists and a preference for speaking to the Indians in English instead of Hindi leaves them very proficient in English.

This is the main attraction here. While I was here, he was in Southern India teaching. When The Dalai Lama is here the city is full of pilgrims and learners. You can learn more about the Dalai Lama here.

From the pictures I’ve seen of Potala Palace, the actual home of the Dalai Lama in Lhasa, Tibet, his accommodation here is incomparable. It’s very simple and plain, quite frankly. See for yourself below.

The temple itself is also the simplest temple I’ve seen in the Buddhist world. It’s downright simple, though I suppose if you believe that the Dalai Lama is god, as Tibetans do, then you don’t really need a fancy place that might overshadow or steal the thunder of the god within the four walls.

Pictures aren’t allowed inside, but even shoulder to shoulder I doubt more than 150 people could fit inside the temple. There is seating outside the temple and when the Dalai Lama speaks or gives teachings, he is simulcast on FM radio in English.

Inside the temple there was a rather large statue of Green Tara. I found it great that a woman’s statue was in there, but strange that her large breasts were exposed when the temple is always full of celibate men.

While I was there I saw many offerings people have made. In Thai temples I often found fruit, though I also saw whole baby pigs and fish as well. In any case, offerings are symbolic. Here it was no different, but the offerings were just.. weird. I don’t know how else to explain it. For so many people this is such a holy place, yet you’d find Tropicana orange juice or Marie cookies. It just seemed odd.

Prayer Before Coming To The Temple

Prayer Before Entering The Temple

Prayer In Front Of The Temple

Temple Is Inside There

View From The Temple

May Peace Prevail On Earth (Hindi) 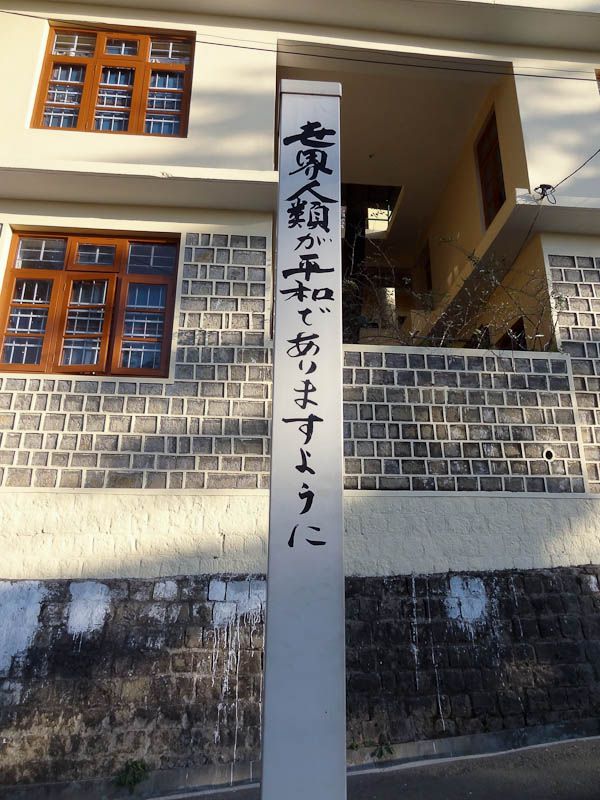 May Peace Prevail On Earth (Chinese)

May Peace Prevail On Earth (Tibetan)

May Peace Prevail On Earth

I’m not sure what else I can say. Dharamsala just felt great and I realized I really do like being in Buddhist environments. I also realized that Tibetan women are phenomenally attractive.

Dharamsala was a wonderful respite from the chaos of Delhi. My respect for India increased greatly as well, for it has given a safe haven to this community that has truly lost its freedom and way of life in its homeland. If you aren’t familiar with the story of the Tibetans, I recommend you read about it or at least watch a movie like Kundun. But basically the Chinese took over Tibet in 1959 and have worked hard to eliminate all traces of Tibetan culture and religion ever since (essentially the story of Native Americans playing out before our eyes).

It’s hard to recall such a large community’s pleas for help going so largely ignored in recent memory, being taken over by communists no less. But as Heinrich Harrer’s last line in the 1996 epilogue to his amazing book Seven Years in Tibet, says, “Though vocal support for Tibetan freedom is growing throughout the world, materialistic aims in most countries are given preference over human rights.

On that note, some other pictures from Dharamsala.

Monk And Guy Walking Down The Street

Monk At The Temple

Monk Walking Down The Street

The True Meaning Of Life

Time For A Manicure

Volunteering With AMURT At The Pundag, India Railway Station

A Chance Encounter With Awesomeness At A Random Restaurant In Delhi

Volunteering At An Ex-Tibetan Political Prisoner Camp
Scroll to top