The Indian visa has been one of my greatest causes of stress on a trip otherwise largely free of stress.

Well, I have big plans for India. I want to study yoga, perhaps learn Hindi, visit some amazing friends, and walk in the footsteps of Gandhi.

If I didn’t get the visa, from Nepal I’d have to fly somewhere. Tibet (China) is to the north, which I can’t enter, and India is to the south. My options were Pakistan, which I need a visa for and the embassy here says on its website it doesn’t give visas to non-Nepali residents/citizens, Iran, which takes a long time to issue visas (plus I’m American..), Dubai, or Malaysia (Air Asia flies the route and is the only low-cost airline route available from here). In any case, no option would have been cheap!

My first attempt at obtaining the visa came in Laos. I filled out the paperwork online, printed it, and went to the embassy.

The clerks insisted that I needed to show how I would enter India, though it wasn’t listed as one of the requirements I saw. Still, they said they needed to see my plane ticket. I planned to cross the border by bus from a neighboring country, so I had no plane ticket.

Finally, the counselor official came to speak with me and he told me that I could apply and pay the fee, but he was completely sure I’d get rejected for the visa. He advised me to apply for the visa from the country just before entering India. At the time I assumed this would be Bangladesh. In the end, it was Nepal.

I’m glad it worked out this way in Laos. Had they processed my original application, a couple things may have worked against me.

First, they ask for your religion. I wrote the Church of the Flying Spaghetti Monster. 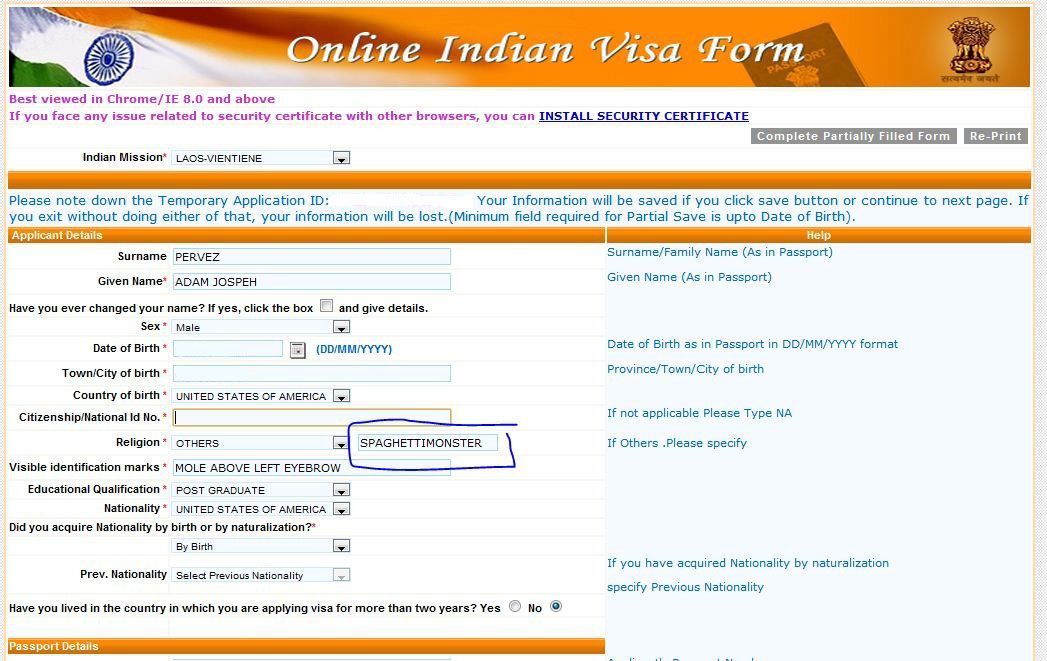 Something tells me that they neither recognize nor acknowledge us pastafarians…

The other issue has no solution and was something I couldn’t hide. My dad is originally from Pakistan. He moved to the U.S. in 1974 when he was 24 and has lived in the U.S. ever since, but to India anything/everything related to Pakistan is suspect and cause for concern. In some ways this is a valid concern, but in others it’s just absurd security paranoia.

On the form it asked for my dad’s name, his nationality, and any previous nationality he had. Similarly, there were questions asking if I had family in Pakistan, if my father or grandfather ever lived there, etc.

At the embassy in Nepal I met two Americans who were born in the U.S. to Pakistani fathers. Both have had visas denied by India in the past despite having American passports. So it’s an obstacle that can’t be fixed.

I went to the Indian Embassy my first morning in Nepal. The embassy has actually outsourced visa applications to a visa processing service located right next to the embassy.

The first step in obtaining the visa is to submit a “Telex” form that gets sent to India. It just has your basic information like name, passport information, etc. I had to wait about four hours to submit this form – a glimpse into South Asian bureaucracy and efficiency.

While waiting I spoke to the two aforementioned Americans with Pakistan-born fathers. They recommended I just apply for a six month visa instead of the ten-year multiple entry visa Americans can get. In the end, it didn’t matter as the embassy here can only issue six-month visas (so they say, but I’ve since learned that in general, the path of least resistance is rarely deviated from in South Asia).

I paid the 300 Rupee/$3.50 fee for the Telex submission, which despite the wait only took about 3 minutes to complete, and then waited until I could pick up my visa. The wait was longer than usual due to the Dashain holidays in Nepal. It should only take three business days, but I had to wait eight days to return.

I returned eight days later with my passport, the very simple application form (which didn’t ask about your parents’ roots, nor connections to Pakistan), and the 5500 Rupees/$64 for the visa.

Again, I had to wait about three hours. When I approached the window, the guy looked me up in the computer and said my first and middle name. Good sign.. then he looked at me and said “six month double entry, ok?” I asked why not multiple as I had requested and he said the visa would have to be endorsed and it was a pain. Or something like that. Refer to path of least resistance comment above.

Anyway, looks like I got the visa! I paid the fee, submitted the form, and had to wait until 5pm to collect my passport.

I returned at 5pm to collect my passport. We all just sat there until 5:30pm. Then, with everyone crowded in front of the window, they started handing out the passports.

There was a sign there saying to inspect your visa to ensure your name is spelled correctly, your passport number is correct, etc.

Of course, the visa said “single” instead of the double I was told that morning or the multiple I had originally requested.

So, I went to the other window, not the one where passports were being handed out but the one where I think the guy was watching a So You Think You Can Dance episode on Youtube. After a minute, he gave me his attention and I told him what happened.

Luckily, he said they would fix it right now. I saw a guy with a briefcase come, take my passport along with a Chinese guy’s passport (his name was spelled wrong), and go to the embassy to fix the problems.

I worried that they’d insert a new visa into my passport, taking up more valuable real estate (and expensive real estate given how much passport renewal fees have climbed). But no, even better. They fixed it with a black pen and didn’t even sign some kind of annotation or something (not sure why, but stamps are really important here and without them I think things aren’t perceived as official).

India – The Window Into Humanity’s Soul