I left Lumbini, Nepal at 6:30am with one goal in mind, GET TO DELHI!

Like everything in South Asia, however, it wasn’t as easy as it would seem.

I joined a couple heading to the border town in a private taxi. It was way more expensive than public transport, but it was there and convenient. I was somewhat rushing as there was a chance I would need to catch a bus at 11am in Gorakhpur, 2.5 hours inside India.

Unfortunately, this shared taxi took them to the place they’d catch their bus to their next destination, but left me 5km from the border. They wouldn’t budge on not taking me to the border, so I caught a shared jeep taxi there, as you can see below.

The border was, in some way, strange. It was totally open despite India’s paranoia of all things security. Nepalis and Indians can cross the border without any immigration formalities. Thus, I had to FIND the immigration offices on both sides of the border.

The Nepali immigration was just to the left of their gate welcoming/saying goodbye to visitors.

Nepal’s Gate On The Border

I got my exit stamp. In the small space between the Indian and Nepali gates, and below are a cow and a dog that are momentarily stateless.

I asked a policeman there where the immigration was. He said it was down the road a bit, but I didn’t realize it would be a solid 300m/1000ft down the road. I kept thinking I had passed it as I passed jeep after jeep trying to lure passengers into their shared taxi to Gorakhpur, the city I intended to head to from the border.

I presented my passport, open to the page containing my visa, and made the immigration policeman angry to have to put down his newspaper. I have a feeling I was the first work he had to do all morning.

There was no computer or anything. I just filled out a form and he stamped my passport. However, he asked what the deal was with the visa being manually altered from single to double entry. Since it was my first entry it didn’t matter, but he cautioned me about a subsequent entry.

From there, I walked to where I was told there were buses to Gorakhpur. The shared jeeps I already passed were twice as expensive, and I was told the buses were more comfortable.

I got to the buses and one was bound for Gorakhpur, the other for “Dilly.” Does “Dilly” mean Delhi?? I wasn’t sure. In such a big country, Dilly could be the name of a town somewhere nearby. Who knows.

I got on the bus bound for Gorakhpur. A few days before my friend in Delhi reserved a spot for me on a train from Gorakhpur to Delhi. But with the train departing about 8 hours from then and still being on the wait list, it seemed unlikely I’d get a confirmed seat. The backup plan was to get a bus from Gorakhpur to Lucknow, and either spend the night in Lucknow, or get an overnight bus from Lucknow to Delhi.

Now I was presented with another option: a 24+ hour bus from the border all the way to Delhi. As I sat on the Gorakhpur-bound bus, I called my friend asking what I should do. She emphatically told me to take the direct bus to Delhi!

As I gathered my things, the bus to Delhi left.

But no problem. Another one came. I just lost an hour.

The bus was infinitely more comfortable than the ones I took on this crazy day in Nepal. Each person had his or her own seat, the roads were bumpy but not too horrible, we stopped relatively frequently, etc.

We left at 9am and I arrived in Delhi at 11:30am the following day. I wish I could sleep on buses, but it’s impossible for me.

I waited at the bus station for my friend, still finding it hard to believe I was actually in India.

She and her husband picked me up, we drove around a bit, they stopped at the Mahatama Gandhi memorial at Rajghat knowing my reverence for him, and we ate and ate and ate. To avoid diarrhea on such a long journey I stuck to cookies and crackers. Now it was time to splurge on Indian food! 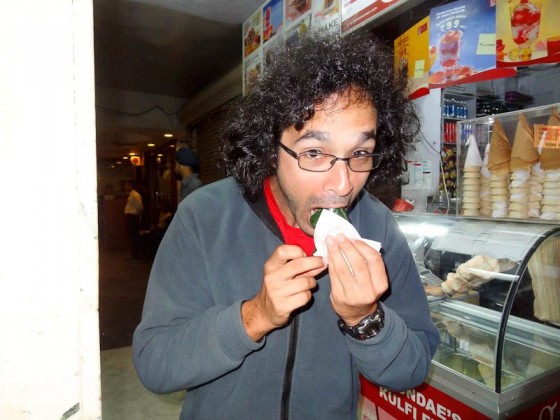 Trying Pan For The First Time

Enjoying Pan For The First Time

So, what’s the gold at the end of a 30-hour rainbow? It’s not the food above. That’s silver at best.

It’s the smile of a great friend I’m so happy to be seeing after so long.