I’m not sure how to say this without sounding negative, but there was nothing exceptional about Santa Marta, Colombia. But I mean that in a completely non-negative way!

In fact, I was thinking while I was there if I could live there someday. It’s always warm, it’s right on the Caribbean, the truly amazing Tayrona National Park is only an hour away, it’s not too touristy, and it’s big enough that you can find anything you’d need. Let’s see. But it could be a place I live someday.

Anyway, Santa Marta isn’t too big but the area near the beach is quite nice. The beach is between the harbor and the port, though they surprisingly don’t diminish the beach’s beauty very much.

I spent a day just walking around the city, getting to know it and feel it. There’s not much in the way of pictures though, as pictures of the churches and parks get boring after a while, no?

The city is decorated for Christmas and I’m happy to share them. Again, it looks nicer in person, but I did my best!

One place I went that was a bit outside the city was Quinta de San Pedro Alejandrino, the place where Simon Bolivar died. Simon Bolivar is often called the George Washington of South America. He was born in Caracas, Venezuela, and helped Colombia achieve independence. At the time Colombia included present-day Colombia, Panama, Venezuela, Ecuador, and part of Peru. Venezuela’s currency is named after him, the nation of Bolivia is named after him, and you’ll find other things named after him everywhere you go in South America.

Bolivar got ill when he was in Cartagena, Colombia and they brought him to Santa Marta so he could die in peace. He actually had a visition of where he’d like to die – near the water and mountains but in the forest. So Santa Marta was the perfect location or this.

He once said something like he is Venezuelan, but his heart is Colombian. So 12 years after his death, his body was returned to Venezuela for burial there. Colombia took his comment seriously, though, and kept his heart.

Bolivar’s dream was for Greater Colombia to stay united, but this obviously didn’t happen. On his deathbed he wrote a plea for this to happen, but his wishes were unfulfilled.

Quinta de San Pedro Alejandrino today is a museum dedicated to this great South American statesman. It’s a beautiful place and was well worth the 4 mile walk to get there from the city.

Bolivar’s Life In A Mural

Me In Bolivar Botanical Garden

After visiting the museum, I went back to the city. I didn’t visit Juan Valdez Café in Cartagena so I decided to do so in Santa Marta. I mean, come on. I’m in Colombia. I have to, right? Juan Valdez had to be the most famous Colombian before Shakira came around. I remember him in the commercials on TV when I was a kid.

Well, as I’ve experienced so far in too many places in Colombia, the service was horrible. It seems here like family businesses have really good service, but when it’s employees working for a big company, they truly just don’t care at all and give horrible service. It’s been hard to reconcile this as everyone told me how nice Colombians are. I need to meet more of them as engaging them via the client-serivce provider relationship has proven to be a very sour experience.

I got my cappuccino with lactose-free milk and sat down. Every café like this in Latin America has free internet. Shockingly, this one requires you to pay! I went and asked about it and the rude lady who served my coffee gave me a card to scratch off that gave me 30 free minutes. I don’t know if it’s customary with a purchase (mine was a big one since I bought some coffee to take with me as a Christmas gift for my friend’s family in Venezuela), or if she just gave it to me to get rid of me.

Either way, there were only two electrical outlets and I had to sit in the sun to use either one.

For these reasons, it was such a relief and joy to find Lulo Caféon the pedestrian street in Santa Marta. I stopped in for a juice and coffee my first day there. Colombia in general has amazing juices. But Lulo has amazing mixed drinks/smoothies.

But anyway, the service was great, the internet was free, and the food options were a mix of pure Colombian, international, and a fusion. I spoke to Melissa, an American who owns the café along with her Colombian boyfriend David. It was just a great story and I vowed to come back after my trip to Tayrona National Park.

I did return and this time I tried their specialty – arepas. But their arerpas are different. You can find several different kinds. In my case, I tried the vegetarian one. As you can see, it was a mountain of vegetables! So good! The arepa had cheese, but since this was a special occasion I took my lactose pills.

From my previous visit, Melissa even remembered that I am lactose intolerant. So she asked me if I was sure I wanted the arepa with cheese. This is the kind of service I haven’t yet experienced in Colombia.

The juice is a Jamaiquino – a mix of star fruit, mango, passion fruit, and mint. Nice!

It was a great experience. Their prices are quite reasonable and the cozy atmosphere is great.

So that was Santa Marta. A few more random pictures are below. Let’s see if I live there someday.. 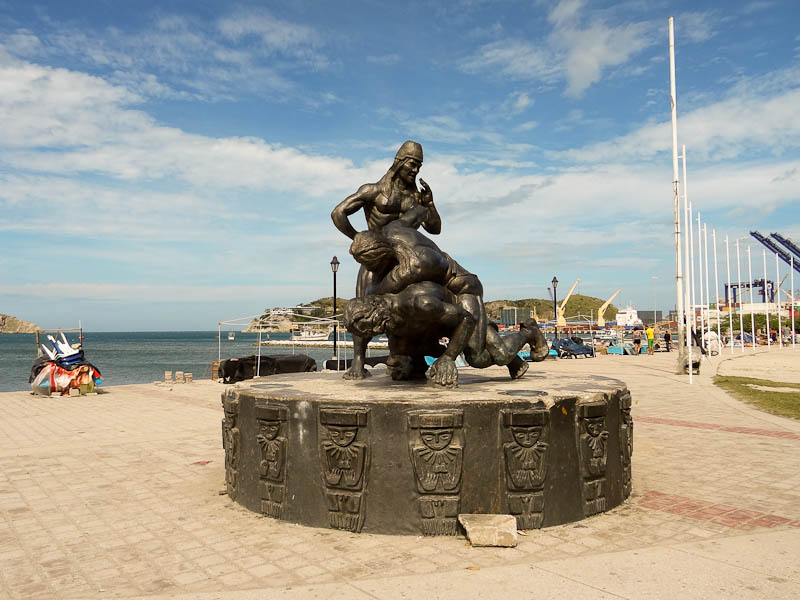 The First Llama I’ve Seen In The Wild – Popayan, Colombia