Cambodia has a very dark recent past that most people don’t know about. When you think of the word genocide you probably think of the holocaust. But there was a genocide in the late-1970’s in Cambodia claiming some 2,000,000 lives – about a quarter of the Cambodian population at the time.

S21 was the name of a school in Phnom Penh. It was turned into a prison and torture center under the Khmer Rouge. People were tortured until they confessed to some crime and then executed for it.

Many of the people who ended up at this prison were supporters of the previous government, opponents of Pol Pot, anyone who was educated, spoke foreign languages, practiced any religion, etc. Those who were not killed were placed in re-education camps and were forced to be agricultural slaves in the countryside.

At this school, prisoners were subjected to waterboarding, lashings, and all kinds of other nasty forms of torture. It is estimated 17,000 prisoners died at the prison, not including an estimated 20,000 children. Only seven people who came through the front door walked out alive.

Remnants From Its Previous Use As A School

One Of The Buildings

The Last Victims Buried In The Courtyard

Just outside of Phnom Penh are the Choeung Ek Killing Fields. Many of the prisoners from S21 were brought here to be killed and buried in mass graves. Cambodia is the mass grave capital of the world and several of these mass graves can be found here.

The site is pristine, beautiful, and peaceful – exactly the opposite of what it was 33 years ago. There is a Buddhist monastery on the site, birds are constantly chirping, there’s a beautiful lake, but unfortunately thousands of bodies are yet to be exhumed.

I give Cambodia a lot of credit for confronting its sordid recent past with complete honesty. It’s awful and hard to understand and explain. The fact that only one of the perpetrators of these crimes against humanity have been held to account for their actions (the head of S21).. that’s a sad situation. But it might have more to do with the fact that the Khmer Rouge was supported most Western countries. Still, a UN tribunal is slowly, very slowly, underway.

In the end, Vietnam invaded Cambodia in 1979 and put an end to the madness and suffering. But not before 2 million Cambodians died.

Below are pictures from the site, ending with a video showing the tranquility there today where butterflies roam freely.

Offering In Front Of The Monument 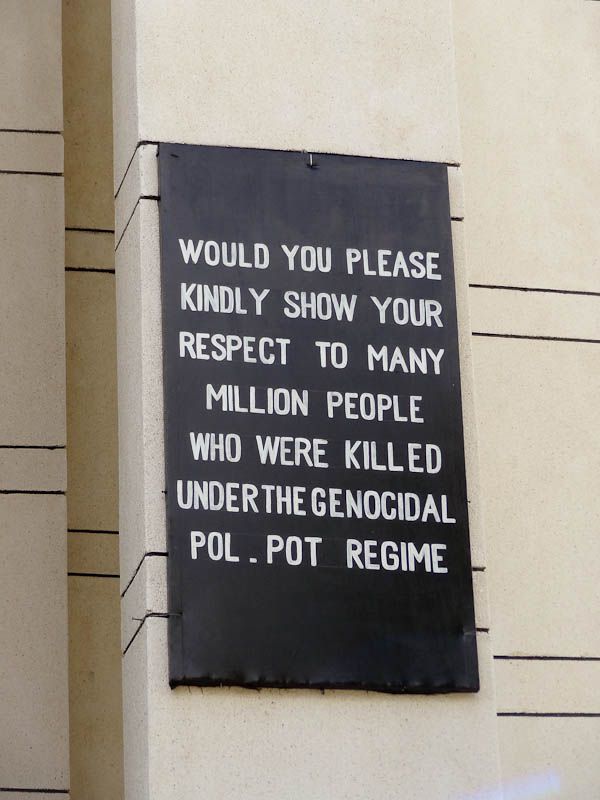 Skulls In The Monument

Skulls In The Monument

Mass Grave Of Women And Children

Mass Grave Of Women And Children

Hard to believe this all happened so recently, no?

Sunday Lunch With Four Generations Of A Vietnamese Family – And I Was...