Phnom Penh is not at all what I expected. It is a modern metropolis full of cars (quite a change from all the scooters in Ho Chi Minh City), the architecture is very similar to Thailand’s, and the people were so nice and unrushed.

That said, it was a bit eerie walking down the streets where so many horrors were committed in the past. Phnom Penh was ground zero for the atrocities of Pol Pot’s Khmer Rouge regime. It’s hard to imagine that some 2 million residents were forcibly removed from the city over the course of three days some 30 years ago and at best forced to work in the fields.. at worst sent to S21 and then killed.

So the modern streets with iPhone shops and cafes and food stalls are stained with the blood of the past.

Cambodia is a kingdom. The way it got that way is a complicated story. But the monarchy was restored in the 1990’s and the royal palace in Phnom Penh is beautiful.

When I was there, the king was home so parts of the palace were closed off to the public. Normally, though, he lives in France from what I understand.

This is Phnom Penh’s most famous temple and for good reason. It’s beautiful. I was there as a tourist, but everyone else there was going about their worshipping.

Offering something is a normal custom here, but it seems like it can get a bit out of hand. Below, some pictures of offerings including a slab of raw meat in the jaws of a lion statue (in more than 90F/33C degree heat) and a glazed baby pig, a raw chicken, and raw fish.

It seems strange, but, I suppose, no stranger than eating the body and drinking the blood of your god, right? And I think it’s almost telling that here an offering is made though the people have very little.

There are two big markets in Phnom Penh – The Central Market and The Russian Market.

The central market is more touristy whereas the Russian market is more authentically Cambodian (though that’s a stretch as there’s still plenty of touristy stuff there).

I’m a sucker for markets, but I didn’t take too many pictures or videos in these. I’m nto sure why, but the smell in the meat/fish section was just overpowering at a level I didn’t experience in Latin America. I guess the heat and humidity is worse here. But ya, my favorite part of the market was just too smelly to capture. Still, I did my best.

I also bought a new pair of shorts. The shorts I had on my trip were bought in Spain in 2009 and definitely lived past their prime. They were fading badly and a bit bulkier than I’d like. The ones I bought were about the same level of bulkiness, but had a cargo pocket on both sides.

Otherwise, I didn’t buy any thing in the markets except some food, which you can see below. The lady running the restaurant was so friendly and so nice I asked for a picture with her after I finished eating and she was happy to comply. The Cambodian smile.. something special about it, no?

The Best Noodles In Phnom Penh

Me And The Chef

Electronics are surprisingly very cheap here. It’s close to the source of most electronics manufacturing and there are no taxes. Thus, for products like computers and iPhones, this may be the cheapest place in Asia to buy electronics.

I was tempted to upgrade my “smartphone” (a very old phone + notepad), but ultimately passed up the opportunity. This phone has been with me since 2008, and before that with my dad since 2005. I’m sticking with it! Plus, regardless of the fact that it’s cheaper here, the retail price of phones is really, really expensive. When you get a plan the cost of the phone is hidden in the contract and your monthly payment goes toward paying for the phone in monthly installments. Bought upfront, phones are crazy expensive.

Cambodia has its own currency – the Riel. But it is only used for small purchases. For everything else US Dollars are used (and dispensed from ATMs). Riels are accepted as payment for anything, but usually are given as change. Conveniently, $1 = about 4000 Riels, so 1000 Riels is $0.25. Most prices are rounded off to the nearest quarter, though there are 100 and 500 Riel notes for very small purchases. 100 Riels = $0.025 so there are no coins.

I knew the countryside of Cambodia must be very similar to the countryside in Latin America. Visitng the capital city first showed me what a huge contrast exists between the urban and rural population. The same exists in Latin America, but Cambodia is, by all measures, far less wealthy. So the difference between the rich and poor here is very dramatic and sadly corruption is endemic.

Still, the people were so nice, the prices reasonable, and the city not too big. My kind of place. 🙂

A Glimpse Into Cambodia’s Recent Dark Past 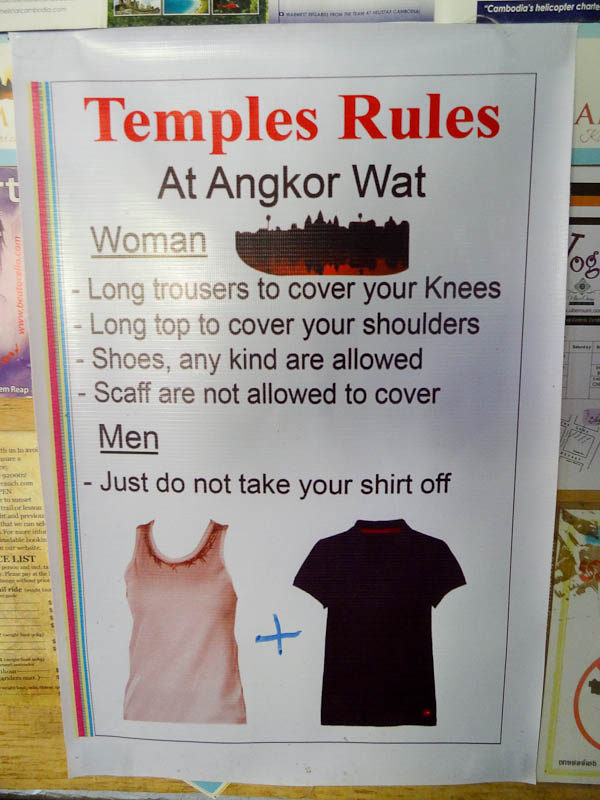 Getting Beaten Up By An 80lb Woman And Other Fun Massage/Acupuncture Experi...
Scroll to top