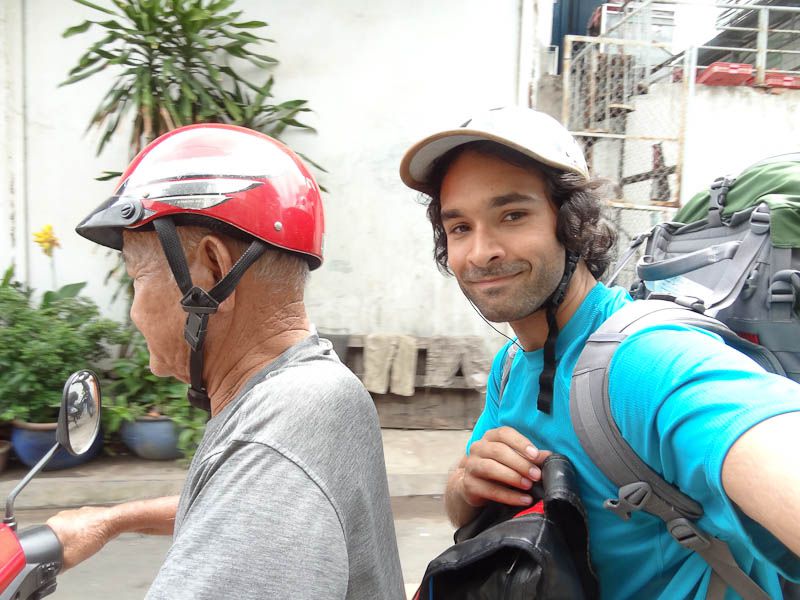 Ho Chi Minh City (also known as Saigon before the war) was my entry point to Vietnam. I arrived a bit sick from Singapore and full of weariness of what was to come. I wasn’t afraid, but I had no idea how much of the awesomeness from Latin America I’d have to sacrifice as a result of me not speaking any local languages.

So, although my first few days left me a bit overwhelmed with all the newness and unsure I liked the experience, I ended up being quite sad when it came time to leave!

The city originally got its name from the nearby Saigon river. After the North Vietnamese won the Vietnam War, the city was renamed after the founder and President of North Vietnam – Ho Chi Minh. He died in 1969, but his name lives on via this city and his image lives on as his face is on every Vietnamese Dong bill.

But the lady I paid gave me back a bunch of change and warned me to be careful. And, of course, she had a smile on her face.

A few days later, I got off my friend’s scooter and a lady on a bicycle behind us kept shouting to us. There was a 20,000 Dong note on the ground. I was sure it wasn’t mine and my friend didn’t think it was his either. So we picked it up, thanked the lady, and put it in a donation bin for charity in the city.

The lady could have picked it up and bought lunch. I saw this quite a bit here and it seems like the Vietnamese people place pride and honor above profit.

I also saw many street and market vendors taking a nap during the midday heat. All felt comfortable no one would steal anything from them, though it’d be very easy.

Sleeping In The Market

Scooter Taxi With All My Stuff

Driving a car here is a nightmare. You have to avoid people darting around on scooters and generally have to travel quite slowly and constantly beep your horn.

Helmets are required here, though mine cost less than $2 and at best would protect against scrapes if there were a crash. Still, I guess it’s good that they are required.

I never got completely freaked out while being a passenger in the delicate art known as driving in Ho Chi Minh City, but in the beginning I’d recommend not riding on the back of a scooter if you have less than 100% control of your bowels.

In the touristy area it’s always a fun adventure hiring a scooter taxi. Here’s how it usually works:

The scooter taxi drivers I interacted with were all great drivers and delivered on what they promised. In one case, as I went to my second couchsurfing host’s house for the first time, we got lost.

The scooter taxi driver called my host and they agreed the easiest thing to do would be to leave me at a corner and my host would come pick me up on his scooter. My host told me that was the plan and he’d be there in a couple minutes.

Still, when the taxi driver dropped me there, I paid him and expected him to leave. Nope. He stayed with me for all seven or eight awkward minutes of silence since neither one of us knew much of the other’s language. But going back to the pride and honor point I made before, he wanted to make sure I, a foreigner, arrived in one piece.

Ho Chi Minh City is Vietnam’s largest and, from what I’ve been told, Vietnam’s most dynamic. It is full of young people as the opportunities exist here and half the population in this country is under the age of 30.

As I talked about in the café post, there is a raging café scene here that beats any European city hands down. You can also find bakeries and French baguette breakfasts filled with local fare as holdovers from when the French had Vietnam as a colony.

The city is divided into districts and district 1 is the city center. District five has the Chinatown. Generally, the farther from the center you get the cheaper housing and services become.

Surprisingly, English was everywhere to be found. Tons of stores had names in English, others listing their services. And it wasn’t for tourist souvenir stores. It’d be for wedding photography, for example, or workshop tools; in other words, stuff locals would buy.

Wifi. It was everywhere. Every place you could eat something had wifi. Even places like hair salons or massage parlors had wifi. And the wifi was incredibly fast – some of the fastest connection speeds I’d ever experienced. I was able to upload over 200 videos I’ve taken over the past year of Happy Nomad Touring to Youtube while there because it’d take a minute or less to upload a 100mb file. Crazy.

The Times They Are A-Changin’

Again, lots of young people means lots of energy and new ideas. I met a guy trying to start up the Vietnamese equivalent to Foursquare, for example. At the seminar there were three entrepreneurs. One studied engineering but started a fancy café in the city. Another started a green construction company.

Economic conditions are a bit tough as inflation in 2011 was 18%. Interest rates are quite high at 11%, which makes borrowing quite expensive for these entrepreneurs. But economic growth last year was 5.9% and there is plenty of room for people with good ideas and innovative solutions.

Facebook is banned in Vietnam and everyone uses a workaround VPN to access it – myself included while I was there. Apparently, the newspapers and TV news don’t report what’s really going on and the youth have taken to Facebook to share what’s really going on and to organize protests, etc. It’s an interesting look at how Facebook is being used as a tool of democracy and news distribution.

I titled this post with the name of a Bob Dylan song. He wrote it in 1963, just before all kinds of change swept the U.S. and the world – both good and bad change. It’s impossible for me to know if Vietnam is at a similar point in its history, but I’d like to think after all it has been through there’s only positive change on the horizon.

Vietnam is officially communist, but it was hard to find “communism.” Apart from hammer and sickle flags accompanying the state flag on government buildings, it seemed like a bustling capitalist place to me.

People are paid wages according to their skills, there was no rationing, etc.

Though there is only one recognized political party, The Communist Party, economic reforms in the 1980’s turned it into more of a capitalistic economy with more international trade ties.

Most surprising was that some of the things I’d expect from a communist/socialist state weren’t in place. Education is not free, health care is expensive, and the elderly are not taken care of very well. I expected a more populist dynamic.

On my second day in Vietnam I went to a market with my first couchsurfing host. She bought some vegetables and fish. As we waited for the lady to kill and clean the fish, which I must admit was a bit traumatic for me, some crazy stuff happened.

The fish were being kept in big tubs with oxygen being pumped in by generators. The fish were quite big, about 18 inches/45cm long. One of the fish decided to jump to freedom (or death?) and  “took the plunge” 3ft/1m down to the ground. We had to scoop it up and give it back to the vendor since she and the fish were on a raised pedestal in the market.

After this, she really started going to town on the fish and we kept getting sprayed by blood. My couchsurfing host got sprayed in the face with blood. Yes, gross.

Then.. Ok, let me start out by saying that in Central America I was forced to become a man very quickly when it came to bugs and animals. There were some funny incidents along the way, but I manned up.

In the market, as we kept getting sprayed by blood waiting for the fish to be cleaned, a huge rat ran by. It was the size of a small cat.

Rats are a whole new .. feature.. of my trip. I think I saw one in Colombia and I saw some in the New York Subway a long time ago. I didn’t freak out or anything. But it was an unwelcome site. Seeing them run over in the road later on was also unwelcome.

Similarly unwelcome were all the cockroaches. But this is the tropics and it’s just a fact of life. There are cockroaches and ants everywhere.. it has no reflection on the cleanliness of the home or establishment. It’s just the way it is – no different than spiders in a home in North America or Europe.

The fruit was amazing since this is the tropics and I had tons of fruit juice and smoothies. I got to try some new fruits like cumquat and jackfruit as well. The usual tropical favorites were all available as well like lyches, pineapple, mango, papaya, guava, etc. On my last day I saw lucuma for sale at a roadside stall. Such a shame I couldn’t make mango-lucuma juice – my favorite! 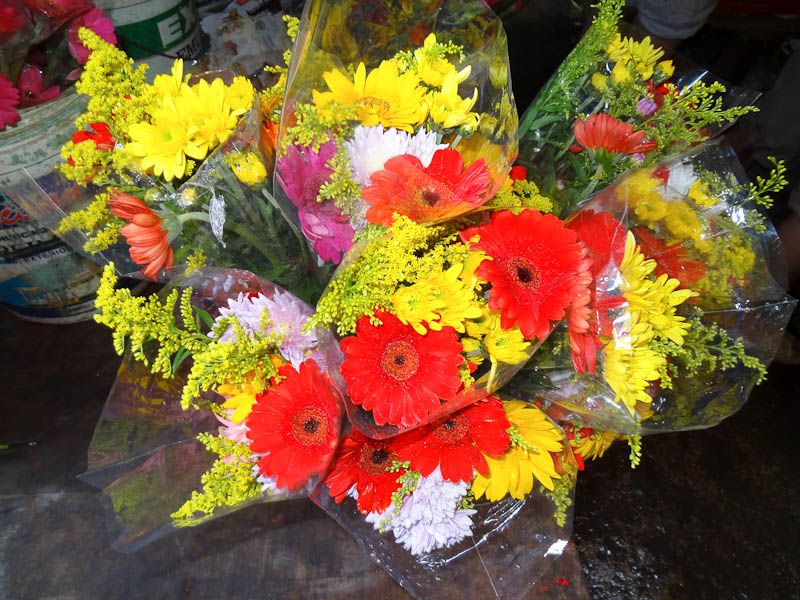 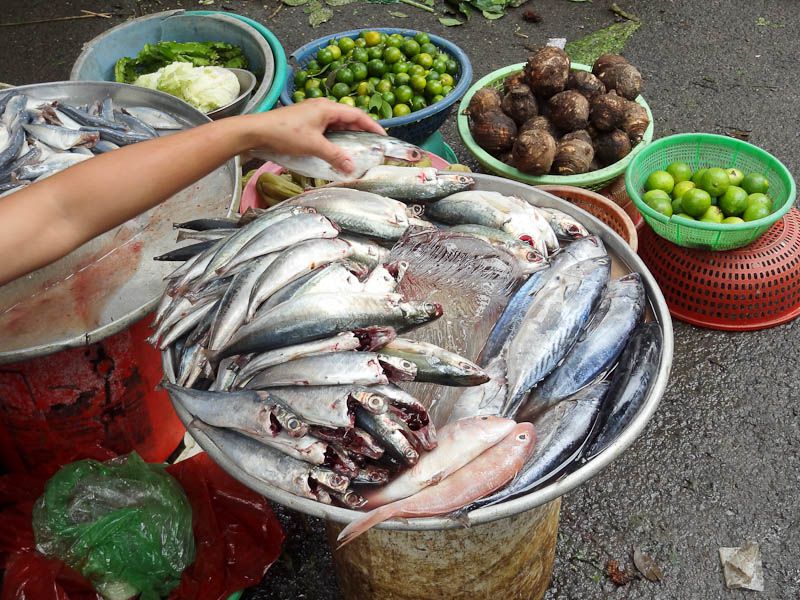 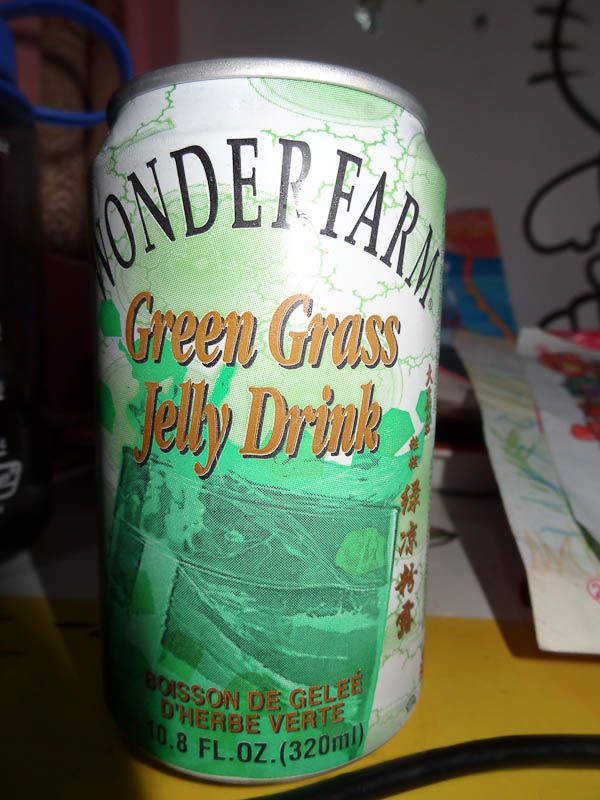 Interesting Name For A Drink 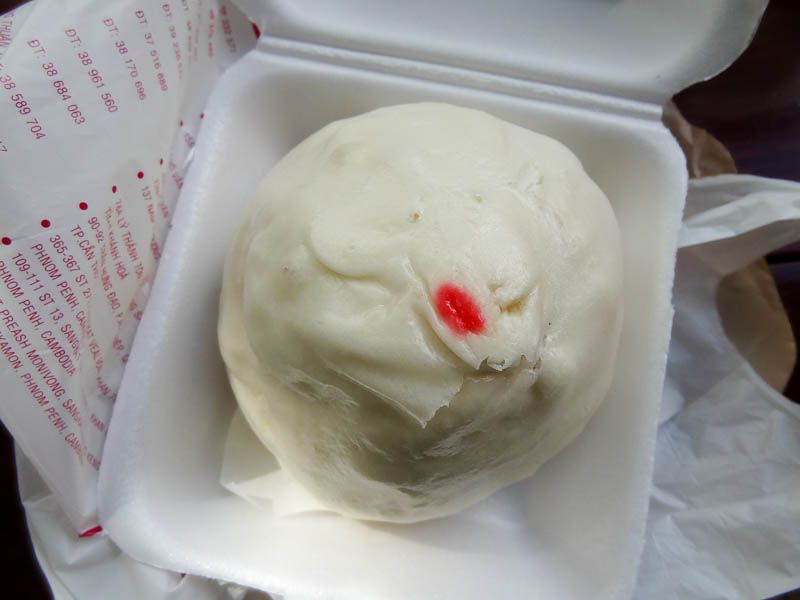 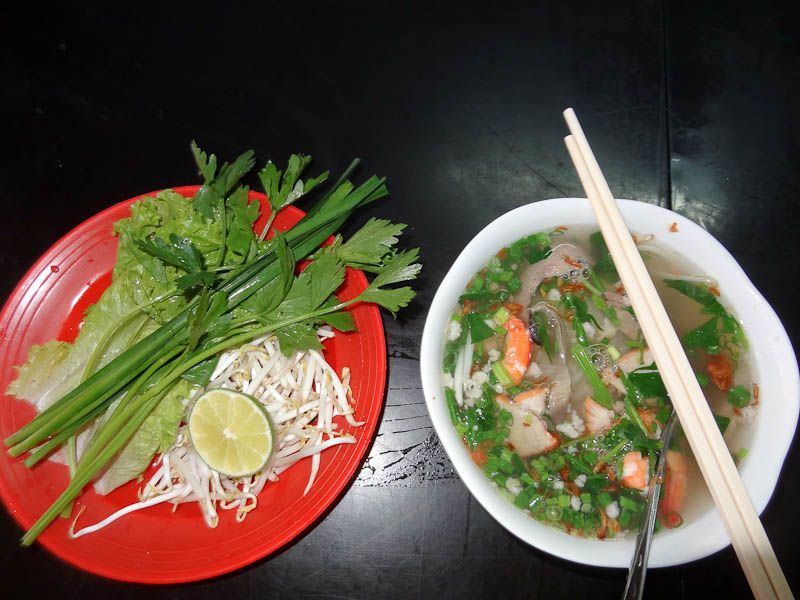 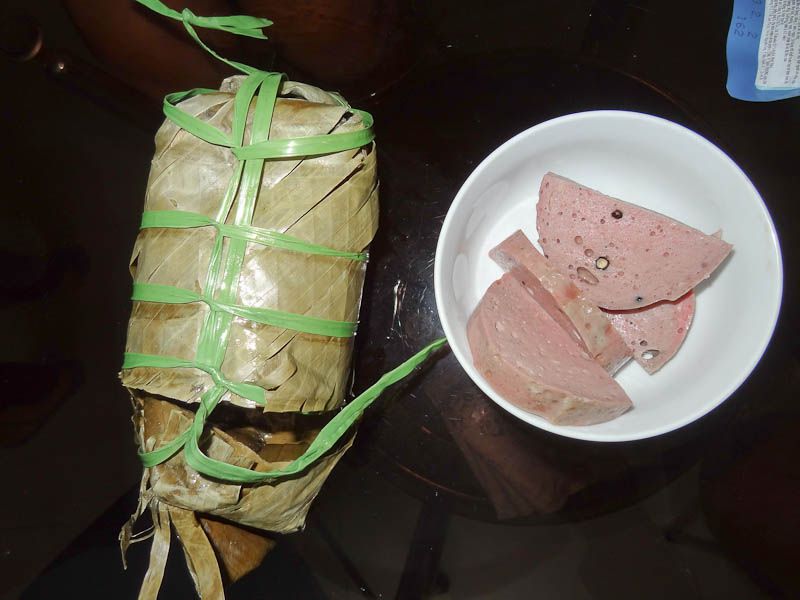 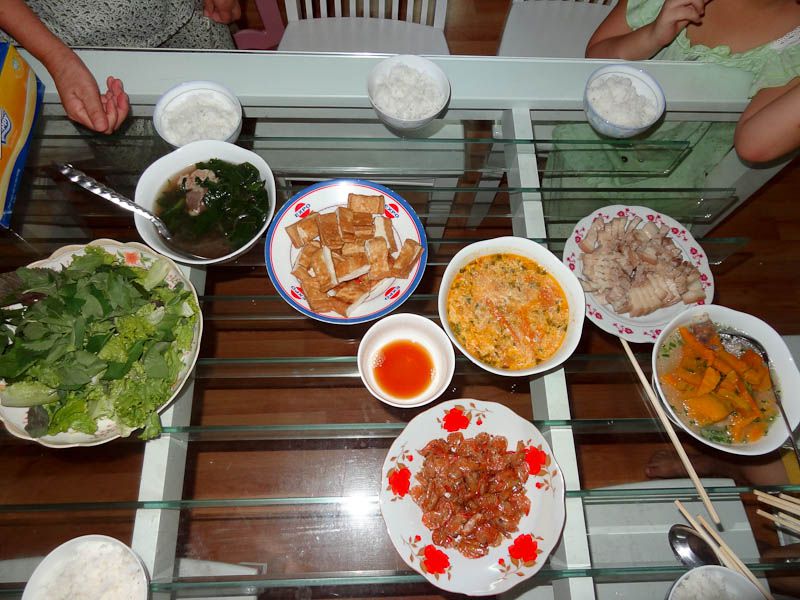 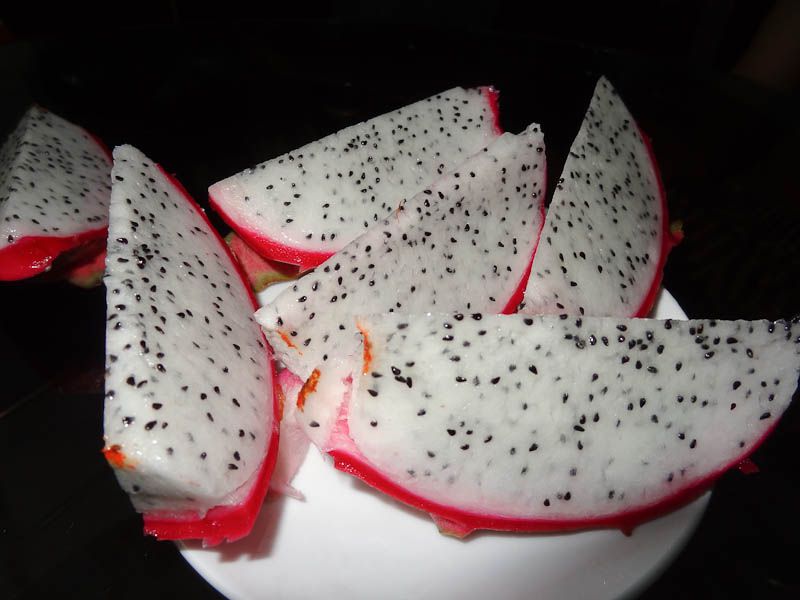 As I left Ho Chi Minh City I couldn’t help but think how easy it would be to live there. Excellent internet coverage, very inexpensive, not too touristy, access to an international airport and everything I’d need..

The only downside is the need to pay for visas all the time, though I later heard perpetually extending the visa isn’t that big a deal.

Many expats choose to live in Thailand for its openness and minimal visa restrictions. I think it’s even more inexpensive, no visa required, more international, more touristy, etc.

So yes, Ho Chi Minh City grew on me and it was the perfect start to the Southeast Asian leg of The Happy Nomad tour.

How could it not grow on me when wonderful experiences like practicing the ABCs with the niece of my couchsurfing host happen?

Knowingly Getting Robbed On A Bus In Vietnam

Sunday Lunch With Four Generations Of A Vietnamese Family – And I Was Invited!