Visiting the COPE Center was one of the last things I did in Vientiane. Places like this, like the landmine museum in Cambodia, are always full of inspiration, but also heavy with sadness and guilt (my country caused all of this..)

COPE’s motto is Helping People Move On. In reality, Laos is the most heavily bombed nation per capita in the world. During the Vietnam War, more than a ton of bombs were dropped here per person. Not surprisingly, there are still tons of unexploded bombs as well as “bombies” – cluster munitions.

The result has been awful. More than 20,000 casualties in the post-war era from these munitions. The sign below tells the story (UXO = Unexploded Ordnance).

The center is staffed with local victims who are very nice and ready to answer any question you may have. The center makes prostheses for victims, makes victim-friendly household goods, educates the public about these issues, and more.

The center is very small, but its impact is incalculable. Below are some pictures from the center, including drawings made by Lao kids during the war that showed the world through their eyes.

Bomb With The Center In The Background 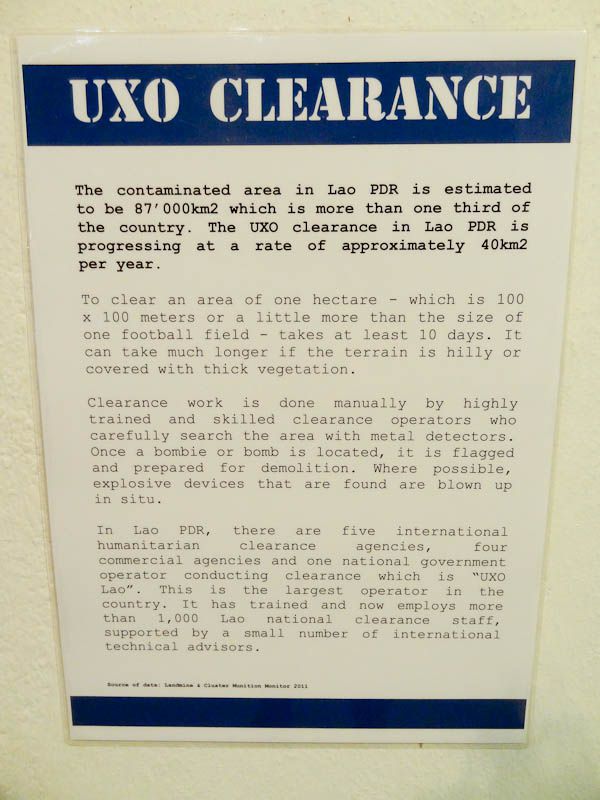 The Legacy Of War

The Legacy Of War

How You Can Help

Vientiane – The Capital Of Laos

An Amazing 30th Birthday In A Laotian Village
Scroll to top