I spent a week in Veuntaen, Laos volunteering with Sunshine School. As I mentioned, Veuntaen isn’t in Google Maps but here is where it is using GPS coordinates.

I was really excited to spend time in the Southeast Asian countryside, especially the Laotian countryside. In Latin America I spent time in rural areas a few times, namely Yoloaiquin, El Salvador and Yauya, Peru. But such ventures into the countryside are more difficult here where I don’t speak any of the languages. That’s why this trip was all the more meaningful for me.

Rural life here was actually quite similar to that of Latin America. Little technology is used, though mobile phones are ubiquitous. Garbage is burned. People are wholesome. The list goes on and on.

The farm I stayed at doubles as a school. I had my own little house to myself as you can see in the pictures below.

Hammock Below My House

View From The Front Door

The homes are built on stilts. The river is nearby and during rainy season the banks of the river go up and into the village. Every year is different, but flooding is almost guaranteed.

Thus, to cope, homes are built up an stilts and usually flooding can be minimized. That said, many families are choosing to relocate closer to the nearby mountains so the annual flood does not affect them.

As you can imagine, the facilities vary from home to home. My conditions were quite good considering the school and farm was constructed with Western use in mind.

That said, with the exception of high-speed internet, I didn’t feel like I was missing anything. While I was there it rained for four days straight, so it was a bit of a pain having to walk outside to the bathroom or kitchen in the rain, but no big deal.

These places have a very strong sense of community. It’s beautiful, actually. The doors are always open, everyone knows everyone, etc.

I guess sometimes it is a pain that everyone can be in each other’s business. But it’s very safe and you can see the communal volleyball court and soccer field in use, with many spectators on hand to enjoy the games.

That said, I heard there is a bit of a drug problem (meth) in the village. Hard to believe, but maybe not so hard to believe. Such communities are often trapped between the “modern” world and the traditional world. There are few opportunities besides subsistence farming for young people, and I guess many people don’t know how to cope.

On the last evening the young people all had a fun evening. A microphone/speaker set was brought in and we sang, listened to music, danced, and generally had a fun time together!

I got to see the Lao bamboo dance, which was kind of like jumping rope actually. And we did some other Lao dances, which involved more hand movement than footwork.

We danced, we cooked, we ate.. a great way to bond before having to say goodbye the following day.

On the last day I was asked to take pictures of the kids while the parents were in a meeting to kick off the start of the year. I don’t have much practice taking pictures of people and it’s quite hard to do, actually. But I think these smiles tell the story of the village quite well.

Smiles All Around – Mr. Peace

Smiles All Around – Mr. Peace 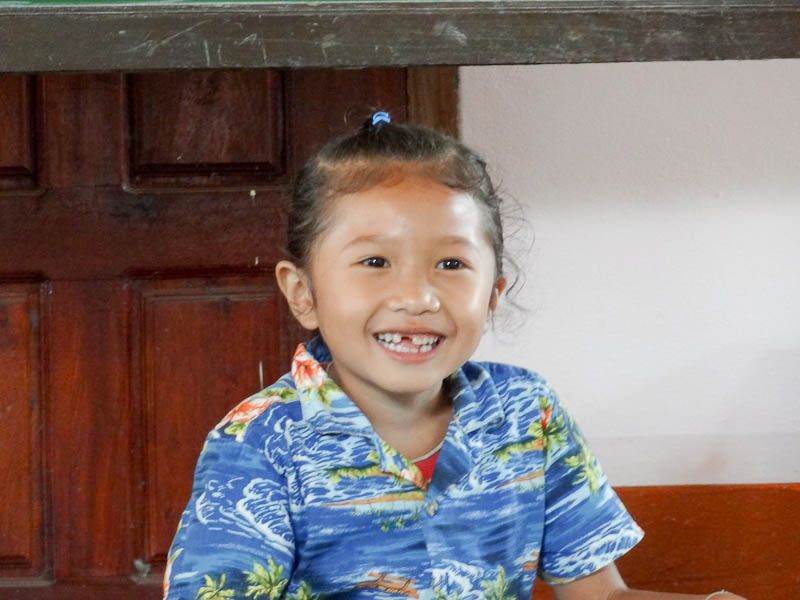 The day before, the kids went out to collect some materials for a ceremony that would be held the following day. I had no idea what was going on, but the boys collected banana leaves and the girls collected flowers.

I went out with the boys and it was a lot more fun than you’d think. They’d take a banana leaf, use a knife to strip the two leafy sides from the stem, and then.. basically they’d hold the knife steady and whip the stem at it creating fast moving projectiles (bullets).

I was told to go upstairs and the setting was quite beautiful. I immediately recognized what the banana leaves and flowers were for. “What a beautiful place-setting,” I thought. But no, it was there for a semi-Buddhist, mostly-animist ceremony.

I guess it was the 8th day of the lunar month, which holds some special significance. But the other reasons for holding the ceremony were:

The village elders were there. It seemed like one had lost his marbles a bit, but in reality he was just as jovial as can be. Lovely!

They started by saying a prayer and listing the reasons for the ceremony. We all had to touch the “place-setting” during the prayer.

Holding On To The Centerpiece

There were tons of white strings hanging from the branches of the place-setting. We were told these would be used later.

A little was translated for us during the ceremony, as we sat on small mats with legs zig-zagged, the proper position for prayer.

At the end, the white strings are tied as bracelets and represent the connection in the hearts between the giver and the recipient. Absolutely beautiful.

Lots Of Love And Connection

It was almost a bit too beautiful to handle, actually. The villagers had limited English so they often said a prayer in Lao as they tied the bracelet to my wrist. But sometimes I’d hear a “thank you” or “I love you” as well. So nice.

And as I sat next to Ako, the girls from the English class came. As they put the bracelets on her wrists, she looked at me and said “this is so nice.”

Ako Getting Her Bracelets

At this point I already had a lump in my throat and was in full agreement.

Then she looked at me again and said “I think I am going to cry.” I just put my hand on her back and said it’s ok. I know I was fighting back my own tears.

It was so nice, as Ako said. And as I write about it a few days removed from the incident, it’s still an emotional memory for me.

Below is the video I captured of the ceremony, though the camera was on my lap most of the time and came out quite badly. Sorry!

By all objective measures, the people in this village are dirt poor. But when I think about this ceremony and its beauty, the wonderful people, and what I felt.. it’s that other side I so desperately try to bring out in this blog but often can’t put into words. In more ways than not, these people aren’t actually poor. But often what they have to offer can’t be exchanged for products.

The bracelets are supposed to be worn for three days and then untied one by one, not cut. I dutifully obliged.

I couldn’t have asked for a better experience and for a better start to the second year of The Happy Nomad Tour. And I’m forever grateful to Sunshine School for letting me volunteer with them and experience this.

The Most Important Kindergarten Lesson We Never Got

Bugs In The Laotian Countryside
Scroll to top