When I started The Happy Nomad Tour, I endeavored to find opportunities far off the beaten path. Yauya is the epitome of this goal. It’s not even in Google Maps.

Yauya is in the province of Carlos Fermin Fitzcarrald and is 3250m/2 miles above sea level.

An awesome friend of mine told me about the rural library project his aunt was working on and I was hooked. So, one thing led to another and I ended up in Yauya.

People Out Celebrating Easter In Yauya

I arrived in Yauya on Easter Sunday. It’s a big reason to celebrate in the village. I missed a procession because I was in my amoeba-induced coma during the day, but I didn’t miss the festivities afterward.

There was chicha everywhere, a fermented corn-based drink that contains alcohol.

Below is a video of me being serenaded by some of the villagers as they dance and enjoy their traditional music.

Quechua is widely spoken in Yauya. Most people’s first language is Quechua and then Spanish is learned in school. Everyone I met there was bilingual.

Quechua sounded differently than what I had expected, but it was soft and nice.

Unfortunately, my stomach didn’t cooperate at all when I was in Yauya. I either caught some stomach flu in Huaraz, or some amoebas that have been with me for a while acted up. Either way, I was a mess.

To get to Yauya you take a bus that leaves at 11pm from Huaraz. You pass through the Cordillera Blanca at night, leaving the amazing views 3 miles above sea level to your imagination. But the bus has no heat, so the freezing temperatures are not left to your imagination. It’s cold. You arrive in Yauya the following morning.

Luckily, my stomach cooperated on the journey. But I hadn’t eaten anything the whole day either.

My first day in Yauya I slept a ton. I just felt completely weak and tired. In retrospect it was clear that my body was fighting the unwanted guests inside me, but I thought they had gone away and I was just tired from the journey. The following day my guests acted up with a fury and it was just a mess the rest of the time I was there.

Luckily, some angels took care of me. Below are me and Consuelo, the founder of the rural library project, and me with Consuelo’s niece. Both went above and beyond the call of duty to help me and make me feel comfortable despite my stomach ailments. Thank you very much once again!

On my second day in Yauya I went with someone to distribute pamphlets about Jatun Nani, the organization I was volunteering with, to the rural schools. It was rainy season up in the mountains and needless to say, being this remote there are no paved roads.

It was scary! But I rode on the back of the motorcycle as we climbed and climbed on our way to some of the schools. At one point, I could tell that Misael, the driver, was having trouble controlling the motorcycle.

We had a mini pump, but inflating the tire was no use. The tire was flat and we had to push it back to town.

The only good thing was that it was almost all downhill. And the views were amazing.

Man At One With Nature 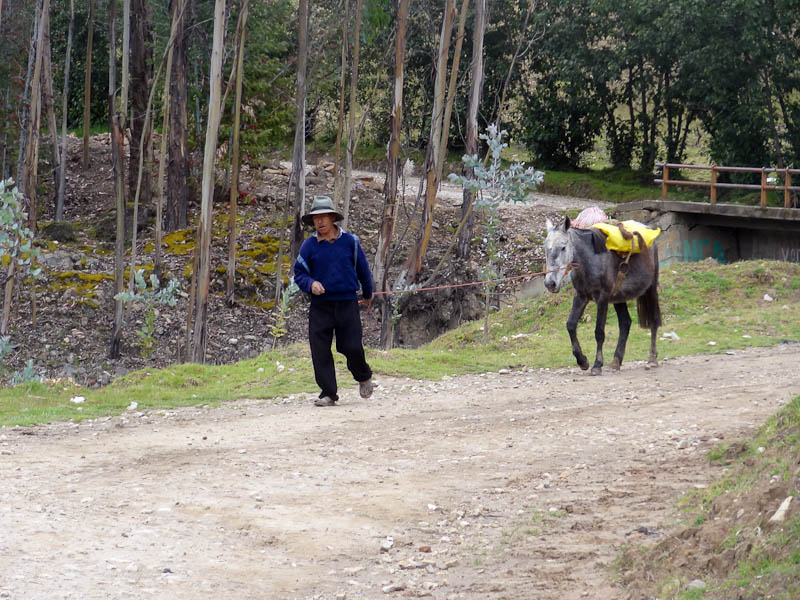 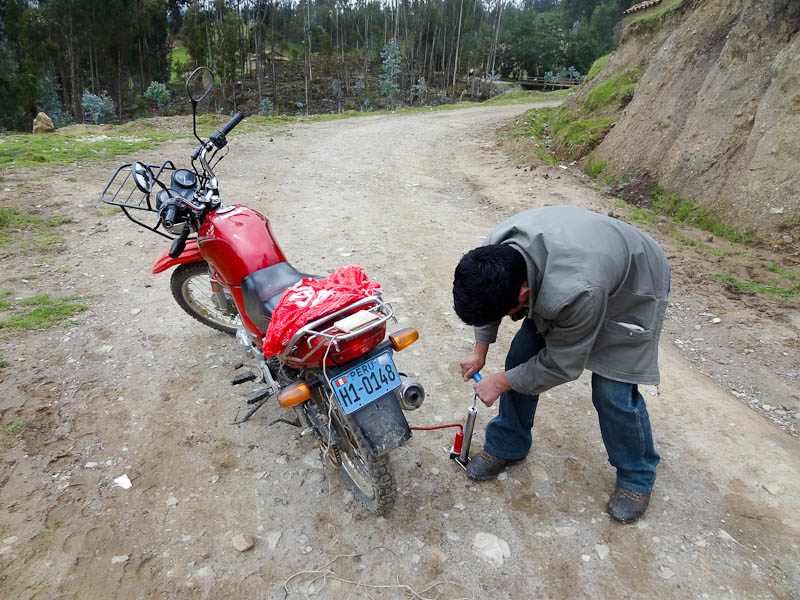 Trying To Fill The Tire 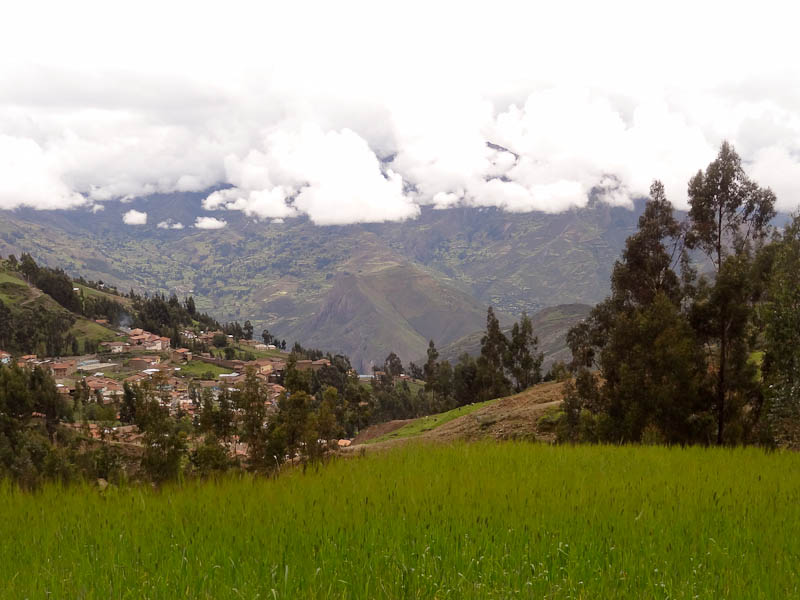 Surprisingly, I was connected to the internet in Yauya. The municipality (city hall) receives a connection by antenna from somewhere else. In the end, the connection is about as fast as dial-up, but there are no other choices. I was happy to be able to use email and help out Jatun Nani. Pretty amazing that you can stay connected from almost anywhere now.

The weather was…horrible. I was absolutely freezing. The mountains are a tricky place. When it rained, which was often since it was rainy season, it was very, very cold. When the sun was out, it was really warm outside but still quite cold indoors.

It’s a different kind of cold though. Whenever you touch something, that object just sucks the heat out of you – including my bed. I slept with a t-shirt, business shirt, sweatshirt, and coat, plus a winter hat, gloves, pants, and three pairs of socks.

I wonder in retrospect if it would have been better to sleep with fewer layers so that my body heat could heat up the four layers of blankets I had on top of me, but that’ll be an experiment for another day.

The food in Yauya was great. I was sick so I often couldn’t enjoy it properly, but it was raw, straight from the farm goodness served daily. I had a lot of chicken soup due to me being sick.

One of the new things I tried was called oca. It’s a very nutritious root similar to a potato, but it’s sweet.

I also tried camote, or sweet potato. The purple dish below is called mazamora. It’s made from purple Peruvian corn and mixed with cinnamon, pineapple, and other goodness.

Pachamanca is a hearty meal of meat, potatoes, and oca. Pacha = earth and manca = pot. Normally stones are heated up and the food is cooked below ground using the hot stones. It’s very healthy and hearty. 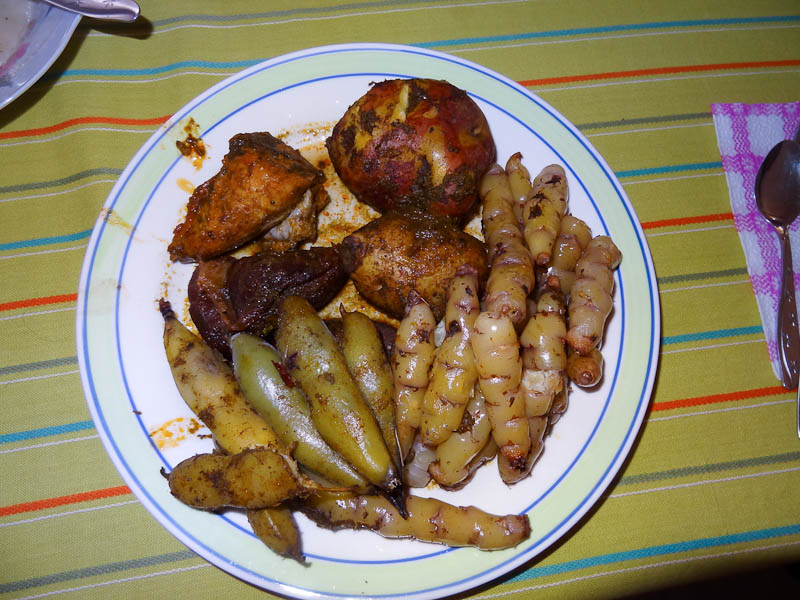 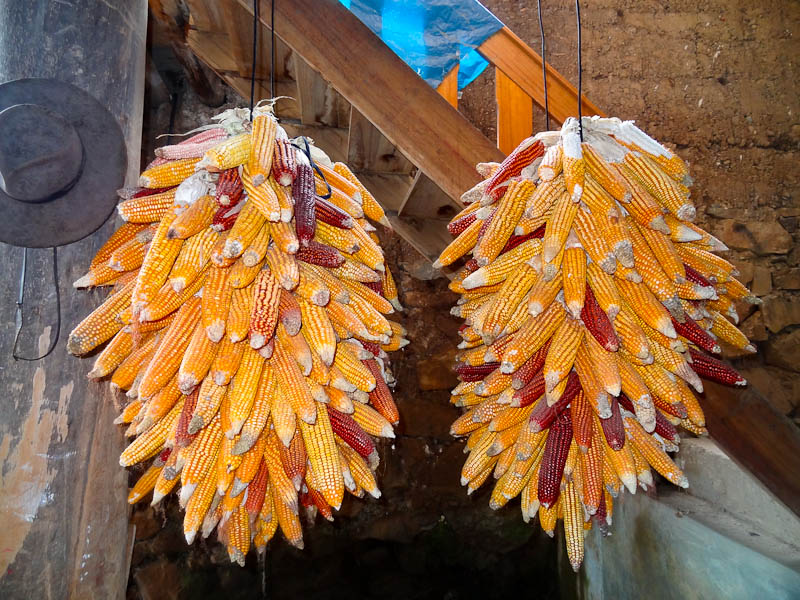 Yauya is a bit of a paradise for nature-lovers. It’s very much off the grid and the life is very traditional. I saw no cars there, just one ambulance. Many people are farmers and everyone knows each other.

In the cities in Latin America, or anywhere actually, there is so much rushing, so little trust among people, and such a lack of human interaction despite the sea of people. In these villages, none of these issues exist.

Everyone treated me nicely, greeted me in the street, and talked to me, etc. People were naturally curious in a way I haven’t seen in the cities here.

Below some pictures of nature and rural village life, but first a message from my neighbor in Yauya. 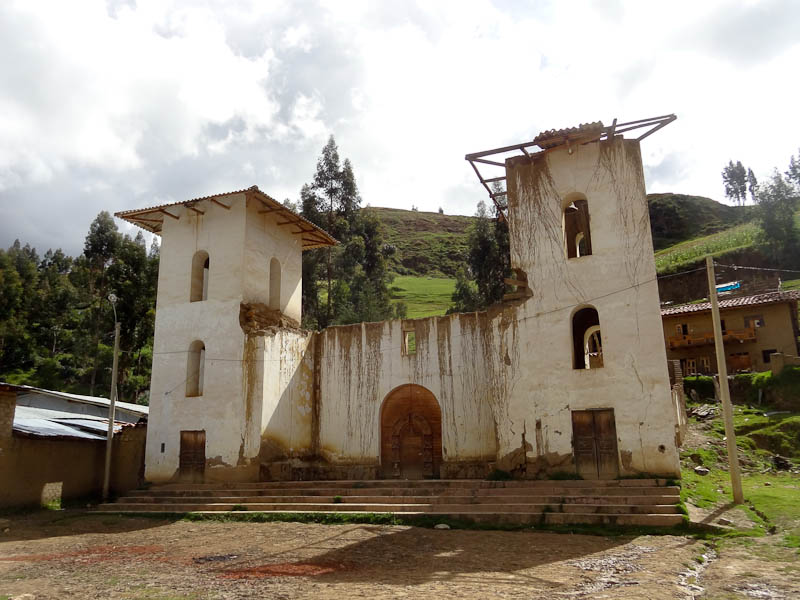 The Church In Ruins

The Only Vehicle In Yauya

What can I say? Yauya was a truly amazing experience. I live for these kinds of off the beaten path adventures and Yauya totally delivered. I wish I had been healthier to truly enjoy all that Yauya had to offer, but I have a strong feeling I’ll be back in the future. 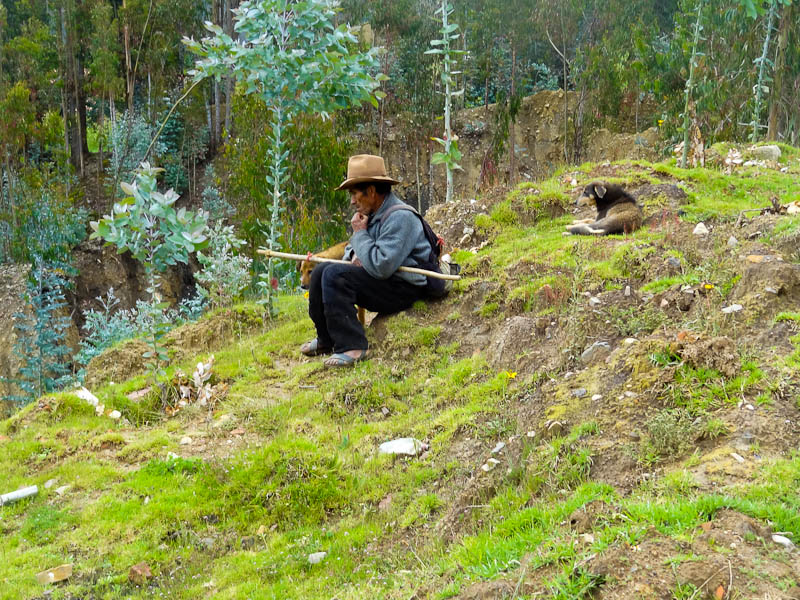 Mancora, Peru – Beach, Beauty, And Getting My Mojo Back

Willkawain – Pre-Incan Ruinas, A Four-Year-Old Businessman, And My Life...