When traveling a certain amount of patience is required. I guess I made that point when I talked about my experience crossing the border from Costa Rica to Panama and again from Colombia to Venezuela.

A similar patience-trying experience happened as I traveled overland from Laos to Thailand.

But before the journey gets underway, check out what I discovered while waiting for the bus! My rain cover for my big backpack has a little belt to fix it to my backpack. After ONE YEAR of traveling, I just now discovered this. Until now I’ve been fairly confident it was tight enough so it wouldn’t fall off, but each journey was an adventure as to whether the rain cover would survive. Now I don’t have to worry 🙂

My Rain Cover Has A Belt!

I made my reservation at a travel agent, which is 100% normal here, to go from Luang Prabang, Laos to Chiang Mai, Thailand. The journey is said to take 18 hours. Fine.

I was supposed to be at my hostel at 5pm for pickup to the bus station. This pickup service is customary here in Southeast Asia and is included in the cost of the bus ticket.

They picked me up at 5:20pm and I was the last one to get in the pickup truck tuk tuk. The eight of us headed to the bus station, all going to either Hanoi or Chiang Mai.

I “checked in” for my bus at the station and was given two pieces of paper. The first .. “lie”.. I hate to use the word lie but yes, the bus was supposedly direct. It wasn’t. So each piece of paper was my ticket for the two different buses I’d take.

Customer service, in general, is good in this part of the world (minus the top half of Vietnam), but that doesn’t apply very much to things like buses, which you’ll only take once and repeat customers are few and far between. 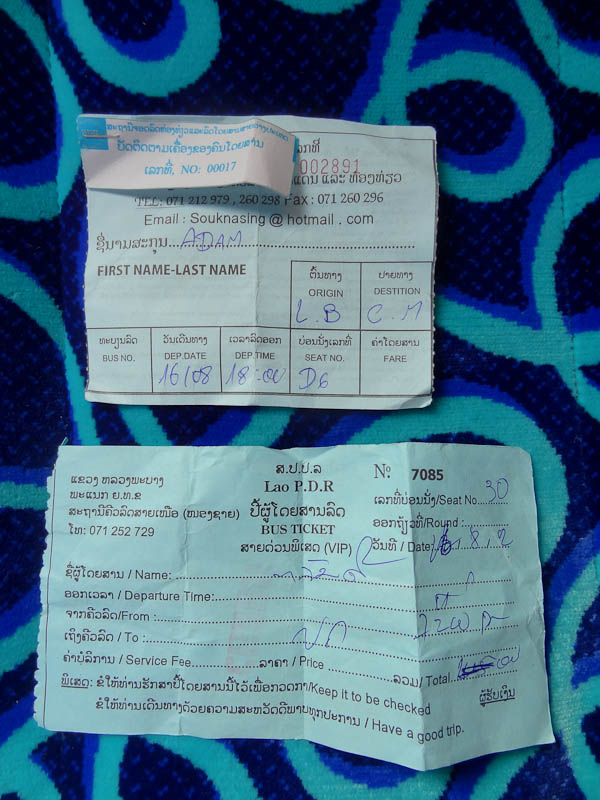 Departure was supposed to be at 6pm. It even said so on the ticket he gave me.

At around 6:10pm, we took another tuk tuk to a different bus station. Here we boarded the bus for 7pm departure. Unfortunately, my seat was in the back of the sleeping bus. All of us from that first bus station were stuck in the back.

The back of the bus is five seats all connected, whereas all the other seats on a sleeping bus are standalone and unconnected from others. So touching your neighbor was all but impossible, and mine happened to be a large gentleman.

My seat was the second from the window seat on the right side. The guy next to me was tall and big, so in a gamble to avoid touching each other the whole journey, I asked him if he wanted to switch. I thought he’d rather let his legs dangle off the end of the bed, which was possible from my original seat but not so from his.

Regardless, the ride left at 7pm and was extremely bumpy until about 2am. I need to be comfortable to sleep and it was definitely too bumpy for me to sleep. Most others couldn’t sleep either. So I listened to podcasts and music, and I read. Once the road was smoother, I did get some off and on sleep.

This bus would take us to the Laos-Thailand border. It was only supposed to take 12-13 hours, but in reality it took 14.5 hours. Then we had 30 minutes of figuring out what to do at the arrival bus station, catching a pre-arranged tuk tuk to the border, going through Laos exit immigration, taking a small boat across the Mekong River to Thailand, going through Thai immigration, and then walking to where the bus to continue our journey was.

After Lao Immigration, Crossing The River By Boat To Thailand

In Between Countries With A Random Tire

That all took about 1.5 hours and we continued the journey at 11am. There were only four of us on a relatively big bus from the border onward, though two people got off in Chiang Rai, about an hour from the border. Then it was just two of us. So much space.. quite a contrast to the cramped quarters we shared on the previous bus!

We arrived in Chiang Mai at 5pm – 22 hours after departure. Those four extra hours can really be felt. Arriving at 5pm it feels like the day is already over, not to mention the tiredness upon arrival.

Another complication.. You can only get a 15-day visa when you enter Thailand by land. I looked at the scanned pages of my previous passport for when I came to Thailand in 2006 and that time they gave me a month. I thought that maybe I could extend the visa in Chiang Mai, but it’s cheaper just to go to Myanmar and back in a day to refresh the visa (though again, only for 15 days). More to come on my “innovative” solution for this unexpected problem.

Thai Visa Only For Two Weeks!

But ya, lots of patience required, and maintaining a positive attitude 🙂

My Biggest Screw Up Thus Far On The Happy Nomad Tour

When Thailand Gives You Lemons, Drink Filipino Lemonade In Nepal
Scroll to top