Upon entering The Philippines I got a 21-day visa. Since I was planning to stay longer, before I came I looked up online how to extend a Filipino visa. It seemed like a simple procedure – just go to the immigration office in Cebu (or any city that has one) and pay 3030 Pesos ($72) and your visa is extended from 21 days to 59 days. Plenty.

I took a jeepney from where I was staying. I considered walking, but as I mentioned, it just didn’t seem safe.

I took the jeepney to a mall that I knew was very close to the immigration office. I had to stop a couple times to ask people where it was, but finally a lady working in a gas station told me exactly where to go. From the mall, it would take about 5 minutes to walk there if you knew where you were going. I didn’t, so it took a bit longer though I didn’t make any wrong turns or anything.

When I got there I was slapped in the face with ridiculousness. I can’t think of a single religious building I’ve been to that forbids men from wearing shorts, but men are forbidden from wearing shorts in the benevolent, honorable, holy, magnificent, divine Filipino immigration office.

Angkor Wat is the biggest religious complex in the world, and they even permit men to walk around naked from the waist down – or so it seems from the sign to the left.

So, as you might expect, where you find ridiculousness, you find entrepreneurship. A guy was ready, with a smile on his face, to charge me 100 Pesos ($2.40) to rent a pair of pants so I could handle my business.

I didn’t accept. I just kind of stood there thinking if I should come back the following day. I was also thinking how unfortunate I didn’t have my pant-bottoms in my backpack, as the day before I had them in there and I could have zippered them on and had no problem.

So I just looked at the guy and said 50 Pesos in a calm but stern voice. He accepted.

In this instance, and only in this instance, the guy didn’t do any security kung fu on me. He just demanded I put on the ridiculous pants before continuing. Ok.. I put them on then and there.

Then I got to the second guy, who checked IDs. I gave him my passport and stupidly remarked that the first security guard was more concerned about the employees inside not seeing my semi-hairy legs than checking if I have a gun for their safety.

I wonder if I can get away with saying almost anything as long as I have a smile on my face and clearly show no malice?

Once inside I’d describe the scene as organized chaos. It took a minute, but I figured out where to go, what form to fill out, where to drop it off, etc.

It took about an hour. The office had about 20 Western-male-Filipino-female couples and one Western-female-Filipino-male couple. Most of these couples had dramatic age differences. I have seen this throughout Southeast Asia. I’m sure some of these relationships are truly based on love. But still. 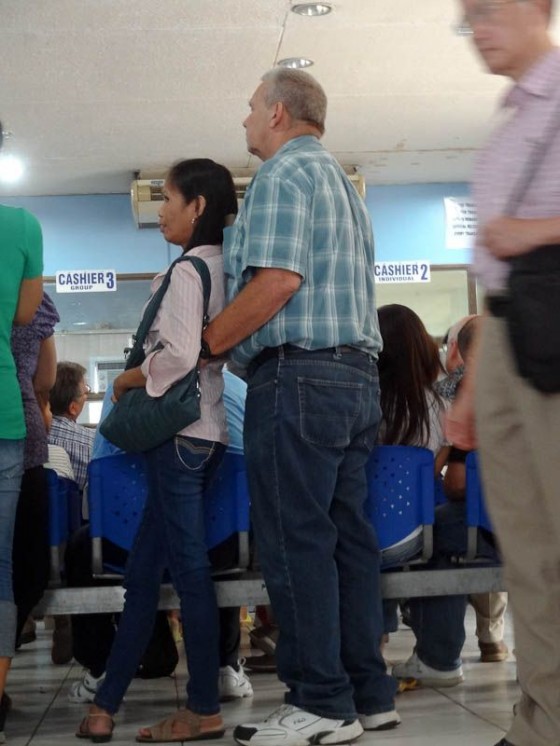 In the end, I got the new stamp and the problem was solved. The people working in the office were relatively nice and I left satisfied.

Oh, and since it’s a service and not a consumable, I paid the guys for the use of their pants on the way out as well.

Amr: A Reunion Seven Years In The Making

Missing My Train And Making My Liver Smile

Back To Fearing For My Safety
0 replies

Getting Pickpocketed In Cebu By Extraordinarily Nice Thieves
Scroll to top