What is one of the benefits of couchsurfing with a girl whose mom is a nurse at a hospital? Well, upon telling her about The Crazy Hair Fundraiser she invites you to her hospital to brighten up the kids in the cancer ward.

It’s hard to believe that I haven’t tried doing this yet. I guess I just didn’t think of it. And if I did, I assumed non-family visitor rules would make it impossible.

So, one evening we went to the hospital and I gave it a try. I couldn’t help but think of my late uncle as I entered the hospital.

At the hospital there were different rooms for patients with different conditions. Some were based on age, like the room of babies with cancer, others were for the kind of cancer involved.

When we got to the cancer ward the nurse, named Macy (yes, she’s aware there’s a department store named in her honor in the U.S.), took me around.

I put on my happy face not knowing what to expect and dove in… or took the plunge to put it more appropriately.

I spoke to each kid, the older ones directly in English, the younger ones through the nurse or my friend who could translate English/Visaya. I asked typical questions like how old they were, how they feel, when they get to leave, etc.

All the kids were in the process of undergoing chemotherapy and many came from villages and towns several hours away. That means that many of them didn’t have family there with them, or had a tiny contingent of their family with them. Tough.

I did my best to be wowed with everything they told me, and to be  honest, I was wowed. When I was their age I never had to deal with anything like what they’re going through.

Wait, I HAVE NEVER HAD TO DEAL WITH ANYTHING REMOTELY LIKE WHAT THEY’RE GOING THROUGH. For them, for whatever reason, they were wowed by me since I’m a foreigner, an American at that. But the real inspiration came from their side. So young, so strong, so much will to live.

The hardest part about the experience was the room of babies. That’s why there’s no pictures from that room. One baby was 23-days-old, had some kind of cancer, and where its butt should be was… I don’t know how else to describe it other than to say its insides were on the outside.

The other babies didn’t have physical signs of cancer, but all were fighting for their lives.

The older kids did their best to hide their ailments. That’s quite a task when some were missing arms and legs as the cancer ate what it could and, to save the whole, parts were sacrificed.

Before I share the pictures, I am not sharing this post (or any for that matter) as a pat on the back for myself. I just want to share my experiences and show how easy it is to brighten other peoples’ day. You can call this volunteering if you want, but the point I want to make is that it doesn’t take much to make a difference.

No, I didn’t cure the cancer in these kids. But I made them smile and offered a diversion from the norm. It’s not much, but it’s all I could do. As I continue volunteering and trying to figure out how to serve humanity in a meaningful way after this trip is over, I encourage you to go out there and see how you can make a difference – even if it’s just making some physically sick (but mentally strong) kids smile. Every little bit of positivity helps, more so than you can imagine. 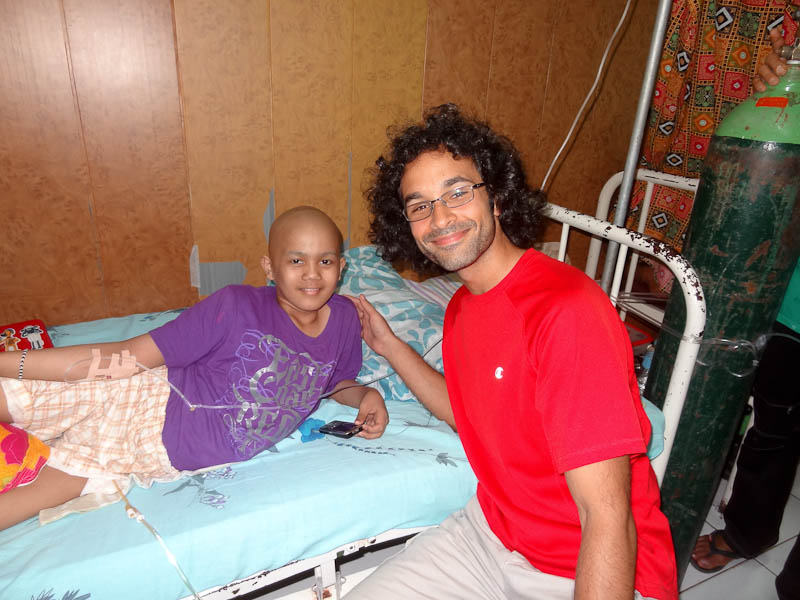 With The Other Nurses

Trying To Do A Hair Transplant

Advice To Live By From A 100-Year-Old Practicing Doctor

The Man In The Mirror
3 replies

A Tribute To Durian – King Of All Fruits
Scroll to top