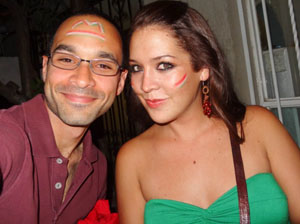 The Happy Nomad Tour has been going on for six weeks now, and as I sit on a bus heading to Mexico City I am in a reflective mood. Reflection is good!

All I can think about is how grateful I am for the experiences I’ve had these past six weeks. I don’t think I’ll ever get over the shock of people inviting me into their homes and incorporating me into their lives. In Houston it was with a friend, but in San Luis Potosi and in Leon it was with complete strangers. In all three places I had an amazing time and felt genuine sadness leaving.

From the start of planning this trip, I knew I wanted it to be about the people and not the monuments or museums. But it’s impossible to plan great experiences with people you aren’t even aware exist. But maybe that’s the point. It doesn’t need to be planned. Having a great time is up to you and how you choose to view and experience what transpires.

When I was in business school, the first several months I somehow became even more shy than I already was and withdrew socially. Were it not for my wonderful roommates, I wouldn’t have had much of a social life at all. But then on Valentine’s Day weekend in 2009, I found a great deal on a flight to Oslo, Norway and jumped at the chance to explore a bit of the magic Scandinavia has to offer.

The -17C/1F temperature aside, I had an awesome weekend. I relaxed, reloaded, and got inspiration from an unlikely source. In an effort to get out of the cold at night, I saw the movie Yes Man. It was exactly the kind of recipe I needed to change my life. In the movie, the main character decides he will not turn down any opportunity he gets. I decided, more or less, to do the same. The rest of my time in Spain was wonderful and I’ve maintained that attitude for this trip.

Perhaps that attitude has helped make the first six weeks of this trip so amazing. But perhaps people in general are amazing. I can’t thank Danielle, Eli, and Marcela (pictured here during the Independence Day festivities) enough for their hospitality, generosity, and spirit.

One of my fears going into this trip was that I would end up taking more than I gave, whether it is from the people I stay with or the places I volunteer at. Unfortunately, I think this is inevitable. But hopefully I’ll get better at giving as the trip goes on 🙂

But I think my attitude has changed a lot, not just the fact that I’m willing to try everything once like in Yes Man. For example, one of my big fears used to be dancing. I didn’t like it, I’m uncoordinated, didn’t understand how to do it, and it just generally made me feel terribly uncomfortable and self-conscious. I still feel that way to some extent, but I went out dancing one night in Leon. Despite knowing full well I was the worst dancer in the whole club, I didn’t care! In some ways, the fact that I am moving from place to place is a bit empowering and allows me to be who I am and live how I want without caring too much about how I am perceived. And I know that’ll stick with me forever. It was one of my personal objectives for this trip – feel more comfortable in my own skin and embrace who I am.

I am also calmer. I don’t worry about things as much and take a more healthy approach toward life. “Let’s see how it goes.” No need to get worked up about things that may or may not happen. This is a big change and I think it’s definitely partly due the Latin influence, but also a deep internal desire within myself to stop trying to control everything and relax more.

One thing I didn’t count on is how hard it would be to say goodbye. In Houston, Danielle told me it was going to be difficult to say goodbye every time. I didn’t agree with her, but she ended up being right. It’s tough and being sentimental doesn’t help. But I suppose the benefit of meeting so many awesome people and having these great experiences outweighs the negative of having to say goodbye and move on. And nowadays it’s never been easier to stay in touch.

In summary, so far this trip has gone far better than I ever could have imagined. Hopefully it’ll stay that way! 🙂

As for me, right now I’m in Mexico City visiting an awesome friend. Tomorrow I’m taking a 22 hour bus ride to Chiapas, a state in southern Mexico on the border with Guatemala. I’ll be staying on a farm with minimal 21st century conveniences for a week and volunteering at an organization that helps get kids off the street and caught up in school. In Guatemala I’ll be volunteering here for two weeks.

In both cases, internet access will be sporadic but I’ll do my best to keep the blog updated.

Listening To My Gut And Quitting Nicaragua Early