There’s more to life than the American Dream we’ve been sold. In this series I present an alternative way to view the world and your surroundings. There is so much out there to experience, enjoy, and incorporate into our lives. It’s all there for the taking, but getting there is the hard part. In this series I show how to to change your paradigm to give yourself a fighting chance of taking the path less less traveled to live up to your potential. How you act on what you discover is up to you, but I hope you take your own plunge into a happier and healthier life.

It’s a question I get asked a lot:

I recently had experience X or realization Y and I want to do more to help those less fortunate than me. It’s really hard to get started though. There is so much need out there, so many problems and so many people who need help.

What to do? Where to start?
Concerned Citizen wishing to make the world a better place

I love getting these messages and I always respond to them. But what prompted me to write this post is this fantastic Ted Talk from Ernesto Sirolli.

Though the talk is mostly about entrepreneurship, he gives the absolute most important advice about helping anyone under any circumstances: shut up and listen.

An Example From Honduras

When I was volunteering with Cape Cares in Honduras I had a bit of an internal crisis, asking if I was really helping the local people or not.

After translating and helping the local people receive medical and dental care from the US doctors and dentists, I saw what a gulf there was between these two communities of people. As a translator, I had one foot in each world and it was quite clear to me.

The local Hondurans benefit from these visits, but it definitely creates dependency and draws them further and further away from their Maya medicinal roots. All the medicine and dental work was triage care and didn’t drill down to the root cause of any of their problems.

For example, as I translated for a dentist working on a five-year-old boy’s mouth, I looked for teeth that didn’t exist. His baby teeth all seemed to disappear as if he spent all day filing them down. In reality, a combination of not brushing, drinking Coca-Cola (hey, it’s American, tastes good, sparkles, and there’s an abundance of advertising so it must be good!), and sucking on local popsicles (sugary water frozen in a sandwich bag and then sucked on through a hole you make with your teeth), he had fully destroyed his teeth at the age of five.

Of course, it’s not his fault. So the dentist turned his attention to the mom. He gave her a pamphlet explaining proper dental care, especially for children. He told her to read it while he worked on the next patient. If any questions arose, through my translating he could answer her questions.

She looked at the pamphlet intensely, nodding her head and making it really seem like she was learning new things. After five minutes she said she understood and would help her child have better dental care. Unfortunately, the pamphlet was upside-down for those five minutes and she hadn’t read anything. She was illiterate and quite content to maintain the status quo to save face at the expense of her child’s health. This is reality.

I told her the basics from the pamphlet, the importance of brushing and the damage sugar does to teeth so maybe she can change the habits that led her child to such a horrible dental situation. But how many others did we miss?

To get to where I was volunteering I had to cross a bridge that forms the border between El Salvador and Honduras. I thought about that bridge and then connected it to how all too often the side with more “knowledge,” economic power, or status seems to cross the bridge and institute what they think is best without listening to the other side. Maybe in this case some education about basic dental and medical care would have been the absolute best service these doctors and dentists cold have provided instead the triage care that never decreases despite their presence every six months.

A Story From Panama

Staying in Central America, during my boat ride from Panama to Colombia we stopped on an island that the Kuna indigenous group lives on.

We got a glimpse into their simple way of living, but they too have had lots of “help” from American missionaries. The missionaries brought big water tanks, which definitely helps them. Great!

But then there’s the other side of the story… 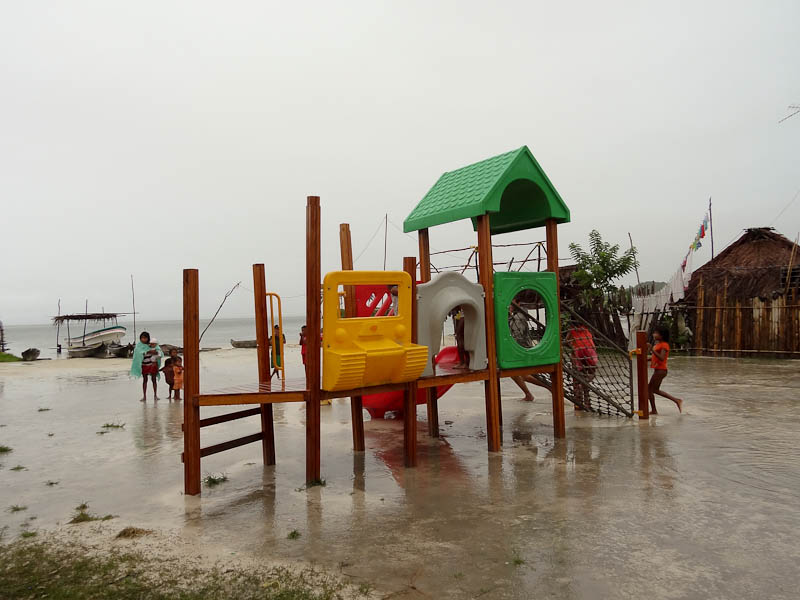 They live on an island so there is very little free space. The community was built up on the coast of the small island leaving the center empty and flat for community activities. This is where the kids gather to play. The missionaries brought an American-style playground with a slide thinking the kids would love it.

Instead, it was used for a day and no one liked it. It’s Latin America..what do you think that area was used for before? SOCCER!

Yes, of course, the most popular game in the world. With the playground there, the soccer field was ruined. What was supposed to bring joy and entertainment instead ruined the soccer field.

Had these missionaries asked the Kuna people what they needed, perhaps instead of bringing a playground all the way from New York they could have brought something that would have really improved their quality of life.

These are two small stories from The Happy Nomad Tour that illustrate how important it is to listen if you want to help people. Whether you’re in Panama with the Kuna or in Pennsylvania talking to your mom, the lesson is still the same: listen. Then empower.

You may not like what you hear and you may even vehemently disagree. But it’s humbling to realize and have the consciousness that you may not have all the answers. Not every situation is a nail and you a hammer. Sometimes the best you can do is nothing. Sometimes you can do way more than you thought possible to help others if you listen and let what you hear germinate with your own knowledge. Meet the other side halfway on that proverbial bridge and learn about them and their circumstances.

Gandhi said “The best way to find yourself is to lose yourself in the service of others.” If you don’t listen to others, you certainly aren’t serving them in a meaningful way.

Every single project that we set up in Africa failed. I was distraught. I thought at age 21 that we Italians were good people and we were doing good work in Africa. Instead, everything we touched we killed.
Ernesto Sirolli

A Day On The Happy Nomad Tour – Castle, Journalist, Cafe, And Fun!

Montreal To Cleveland – The End

A Sunday Hike In The Mountains, The Beach, And One Incredible Dog