Volunteering at Rayo de Sol (Ray of Sunshine) in Arequipa was a wonderful experience. As I think about the future and what I’d like to do with my life post-Happy Nomad Tour, a lot of what Rayo de Sol is doing appeals to me.

Started by a French woman, Rayo de Sol serves the indigent community of Alto Cayma – about 25 minutes outside of Arequipa.

Most houses and buildings in Alto Cayma are constructed simply and many are unfinished. You can see this below, though from afar I think it looks quite beautiful.

Rayo de Sol is a pre-school/kindergarden for the neighborhood. Since early childhood education is so important and these kids otherwise would be financially prohibited from attending a pre-school, Rayo de Sol provides an important service to the community.

There are two groups of kids, ages 0-3 and then ages 3-6. These two groups of children have different needs. The kids have school in the morning, where the teachers work with the kids on pre-school activities and learning via experiences.

While the kids are receiving instruction at Rayo de Sol, the volunteers are selling bread and pastries in the streets of Arequipa. Upon returning to Rayo de Sol after the bread is sold out, the volunteers have lunch and then babysit and play with the kids until their parents pick them up (usually between 4pm and 6pm). 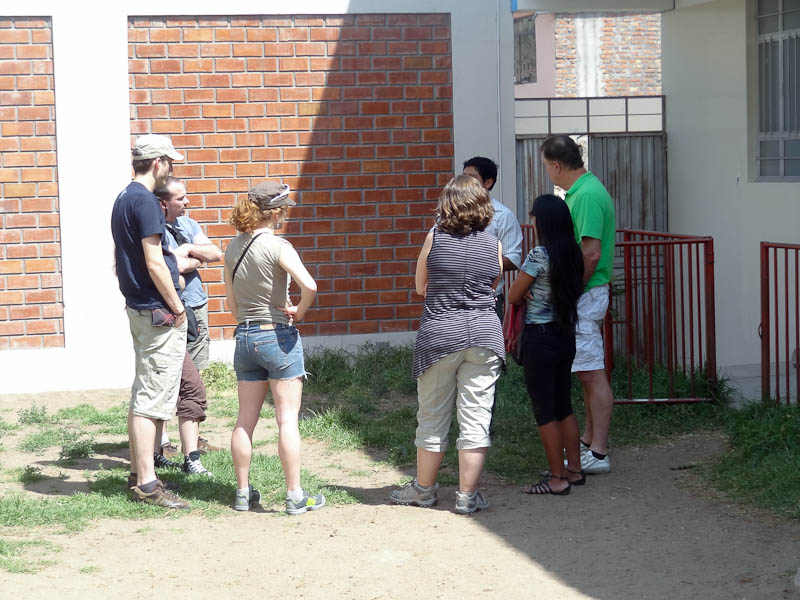 Playing With The Kids In The Afternoon

Being A Street Vendor

Selling Bread In The Streets Of Arequipa

In Latin America it’s impossible not to be harassed by street vendors hawking everything from gum to fruit to ready to eat pieces of cake. Normally they are annoying, but it depends on the person and the place.

I never imagined I’d be doing the same. I don’t think many MBA graduates have pursued a career in street vending. And that’s exactly why I wanted to volunteer with Rayo de Sol! Besides the fact that I’d be helping kids directly and indirectly, I wanted to get to experience business on a very, very low level.

Many people living at the so-called “bottom of the pyramid” sell whatever they can to get by. Selling French bread and pastries is not the same as selling gum. Gum is a commodity and what I was selling was a specialty item not available elsewhere.

I tended to yell less to attract attention to what we were selling, though this part of the world is definitely more aggressive when it comes to promoting your wares. Partly, I suppose, it’s for survival as you try to maximize sales and thus income to live, but partly because I think many people here expect to be served. If they don’t know what you’re offering, they probably won’t approach. So you yell.

I think street vendors probably have a better handle on human psychology than many psychologists do. First, they are used to being rejected, which was something I had to adjust to. At first, I felt angry when I’d offer someone bread or a pastry and they’d ignore me. But I am 100% sure I’ve done exactly the same – ignoring a street vendor offering something I don’t need or care about. Now I’ll always refuse politely as I know how hard it is to do what they are doing.

We walked around the center, often canvassing the same areas every day. You get a feel for which places are best to sell. Shopping centers and markets were always great options as the people there are stuck. If they want to eat they have to leave and risk losing potential sales. They often enjoyed a pastry or two.

The baguettes didn’t sell before 11am. The closer it got to lunchtime the better they sold. There were four types of pastries we sold – croissants, pastries filled with chocolate, a chocolate and cream pastry, and a pastry with raisins. The croissants always sold out first. The raisins were always last to go.

Rayo de Sol has their own thing going and it is working really well, but it was really hard for me not to start doing some analysis, charting supply/demand, doing some price discrimination, and other things to maximize revenue. Like I said, it works for them and they are content. I was too.

Selling Bread With Other Volunteers

The Pastries I Sold

The Income That Funds The Pre-School

One day I went to an artesian market and tried to sell pastries there. I got to one shop and when the girl heard my accent, she perked right up. First she asked where I was from. Then she asked if I was single.

We talked and it got uncomfortable fast. She worked at a stall selling artesian products and when the owner got back he told me (in front of her) that she wants to marry a foreigner. I replied to both of them that the grass is always greener on the other side.

I met a guy with a similar fervor to marry a foreigner in Casma. I guess it’s more creepy when it’s a guy, but the situation was still weird for me. She didn’t propose, but she didn’t want to let me leave and I had to promise to return the next day, which I never did.

While I was there, one of the kids had his birthday. He turned four and there was a nice celebration. Below some pictures and videos of the event.

Some of the volunteers have been at the organization for several months. They were all leaving around the same time, so they threw a going away party for the kids. It was fun and everyone enjoyed it. Below some pictures and video.

Every Friday the volunteers and parents prepare a meal and eat dinner together. It’s a nice tradition and afterward the parents have a meeting to talk about stuff. They made a salad, quiche, ratatouille, and crepes for desert. I need to volunteer at French organizations more often… 🙂

I genuinely had a great time  volunteering with Rayo de Sol. I easily could have stayed there for a month without thinking. I enjoyed getting to know a city on foot while selling a product to help kids in poverty. It also allowed me to talk to tons of local people. Though the interactions are kind of fake and going through the motions, I will miss those interactions a bit.

Below is a picture that sums up pretty much everything about this experience at Rayo de Sol and this trip – raw happiness that’s impossible to conceal and connections with people.

What It’s All About

Willkawain – Pre-Incan Ruinas, A Four-Year-Old Businessman, And My Life Being Threatened
9 replies