It’s kind of funny how I ended up in Casma. I shot for Trujillo, Peru’s third biggest city, and ended up in Casma, a small village. I searched for volunteering opportunities in Trujillo and found Fiore Peru. They told me they needed help teaching English in Casma and I was in!

As mentioned in my post about Chimbote, my arrival in Casma was delayed a day due to the protesting miners. But once I arrived, I instantly felt at home. I was very happy to get out of big and stifling Trujillo. This is one of the great surprises of this trip for me – that I’ve lived in big cities my whole life and now don’t see myself living in one again.

The population of Casma is around 25,000 and the nearest city is Chimbote, an hour away. Mountains surround the city it’s definitely a desert. And yes, it was HOT.

When I first arrived I was really, really hot. Gradually I got used to it, and similarly fall started while I was there. In just the course of two weeks I could really feel the climate change. Toward the end of my stay, mornings were brisk and cool and cloudy. But Casma is known as “La Ciudad del Eterno Sol” or “The City of Eternal Sun.”

It’s true. Mornings would start cloudy and after an hour or two, the sun would burn through them leaving a blue sky. And my clothes dried faster than I’ve ever seen there. In an hour, everything would dry. Amazing.

Strangely, it’s a very important agricultural area. Farms surround the city making use of irrigation to grow grapes, mangoes, aji, and othe fruits and vegetables. Mangoes are king there, though, and most get exported to the U.S.

The day I took pictures of it was the day after the miners’ protest. That’s why there were armed police there. Otherwise, police were few and far between since Casma is quite safe. Also below is a video in the Plaza de Armas on March 22nd, International Water Day. Many students and farmers gathered to champion the preservation and fair use of water.

While I was in Casma it was their annual tourism week. People come from other parts of Peru to take part in the festivities. There are fun amusement park attractions set up for kids, events, the crowning of a Miss Casma Tourism Week, and concerts.

It was relatively calm, but it’s a fun week for the locals. This year it was a bit spoiled by the miners’ strike and fewer people came than normal.

There is a huge pile of rocks in the city. It was near where I was living. It would seem dangerous, like rocks could slide at any time and damage the houses below. But in the 1970 Great Peruvian Earthquake, an 8.0 monstrosity that struck Northern Peru, very few rocks moved. So people are relatively comfortable with the rocks even though it seems dangerous.

Some Indigenous People Live In Casma

Some indigenous people live in Casma, but not too many. Most are involved in the agriculture business. Compared to other parts of Peru, however, the indigenous community here is very, very small.

Casma also has its own slum/favela. The poorest people live on the side of a mountain just outside of town. It’s visible from the city and apparently the living conditions are quite primitive. Some houses don’t have much of a roof (it only rains for about two weeks in March) and there isn’t running water, hence the big white tank in the picture below.

The Slums Of Casma

The Slums Of Casma 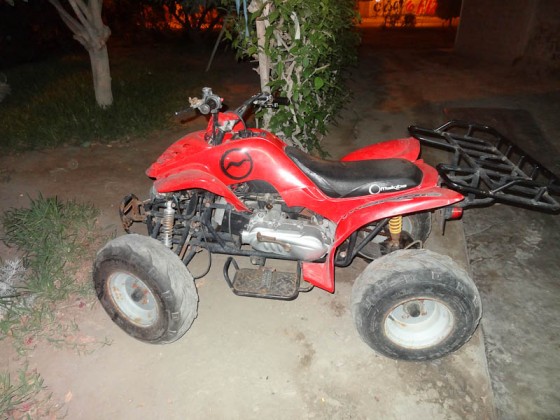 A Common Form Of Transport In Casma

Some people get around on these off-road vehicles, but motortaxis rule Casma. There are no public buses or collectivos (shared taxis). Just three-wheeled wonders. A ride within the city costs 1 Sol/$0.38. The vendor who sells the plastic cover seemingly has a fascination with Nike as the Nike logo is on pretty much every motortaxi in Casma – only it’s backwards.

I saw a motortaxi that had as its license plate my birthday (80582 or August 5 ’82 in the American date format). I didn’t get my camera out fast enough to take a picture of it though. Too bad.

The food in Peru is amazing. Nothing new there. But in Casma I tried a few new things.

First, I tried anticucho – grilled cow heart. It was pretty good. As I’ve said before, I will be a vegetarian after this trip is over. Until then, I’ll try anything…

I also developed a bit of an addiction in Casma. There are innumerable varieties of corn and potatoes in Peru. You can find “normal” popcorn in Peru easily. But they take the corn with gigantic kernels, puff them up somehow, sweeten them a bit, and what you have is a highly addictive bundle of awesomeness. A big bag of it only costs 1 Sol/$0.38. It’s a great snack. Oh, and it’s called “cancha,” which is strange since the same word means field, as in soccer field.

In Casma I also discovered a treat called raspadilla. It’s basically a snow cone. But it’s cool because they scrape the ice right in front of you and you can add flavors like passion fruit, mango, milk, tamarind, peanut, etc. These also only cost 1 Sol/$0.38 (seems like everything here costs 1 Sol, no?). You can see me with a raspadilla to the left and below is a video showing how they scrape the ice to make one.

I’ve written about pollution and garbage before. But I have to bring it up again. Sadly, despite twice daily garbage collection, I found some truly sad and unnecessary examples of pollution in Casma. It’s just something that doesn’t compute in my head. I’ve been to some places where there is no garbage collection. Here it’s well organized and efficient, yet bad attitudes toward mother nature prevail. Below is a picture showing an empty lot in the city full of garbage. Also, a picture showing garbage being burned at night.

It’s truly a crime against humanity to have pollution in a town with such wonderful garbage trucks!

Some random pictures that don’t fit anywhere else but I felt were worth sharing.

Shutting Down A Street Lane With Construction Materials

Almost My Middle And Last Name Running For Mayor

Excuse Me, I Was An Idiot, I Love You

Jessica Simpson Was Here Too!

In the end, I was actually a bit sad to leave Casma. Normally the excitement of wherever I’m going next compensates for the sadness, if any exists, of leaving a place. They warned me that Casma can have this effect on people, though I didn’t believe them – perhaps because at the same time they predicted I’d find my “Eve/Eva” in Casma and never leave. I dodged that bullet, but they were right about Casma having an effect on me.

Volunteering With Rayo de Sol – Selling Bread In The Streets Of Arequipa, Peru

How To Make The Best Juice Ever

Life Hacker, Victim, Or None Of The Above? Watching A Photo Shoot In Lima, Peru
10 replies

Chimbote, Peru – An Unexpected Stop Due To A Protest

How The Happy Nomad Tour Rolls – “How Can You Afford It?”
Scroll to top