As I travel I get to see far off places that stick to local customs that may be thousands of years old. Other places are more “modern” and globalized, adopting more Western customs in their lives. Either way, the concept of beauty is by far one of the most obvious differences I find as I travel since external beauty, by definition, is out on display.

It’s easy to laugh at beauty customs as being ridiculous or backwards when you’re an outsider, but when you’re on the inside few things can seem more important. And we’re all on the inside to some extent, as all of us come from a place with particular beauty customs. I guess this was always on my mind, but India kind of intensely slapped me in the face with this stuff. I had no choice but to think about it, often get frustrated by it, and now write about it.

Using An Umbrella In The Sun In Vietnam [Photo Credit: Martin Terber]

There are many body modifications people endure to become more “beautiful.” I think the low-hanging fruit in this category is the color of one’s skin. In the West, white people tan themselves to be darker. In the East, it’s the opposite. Lighter skin is prized and people go to fanatical lengths to obtain it. From skin bleaching to crazy creams to using an umbrella 365 days per year, people go to extreme lengths to whiten their skin.

To get an idea, watch this advertisement for a skin whitening cream here in India. I’ll write more about this in the future, but here’s a taste.

Another thing I’ve seen is the darkening of the eyes in South Asia. Called kajal in India, I guess it’s the same as eyeliner. What makes kajal particularly sad is that led used to be one of the ingredients. Kajal was used extensively on babies, thinking that the darkening of their eyes would make them simultaneously more beautiful as well as strengthen the child’s eyes, preventing him or her from being cursed by the evil eye. Women still use it today to make their eyes stand out.

Applying Kajal To A Boy’s Eyes In Nepal

A Boy With Kajal On His Eyes In Nepal 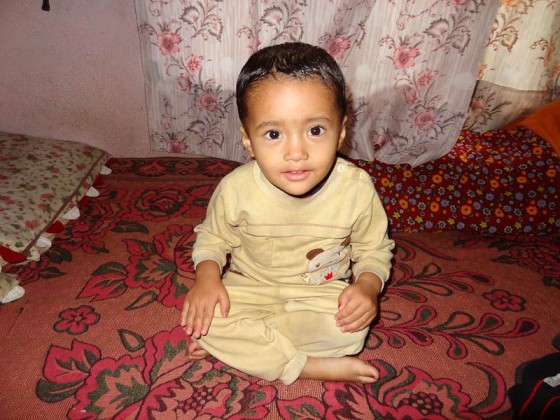 A Boy With Painted Nails In Nepal

I’ve seen all kinds of things going on with nails. Growing up in the U.S. I don’t think I saw a guy wearing nail polish until I got to college, but it hasn’t been as uncommon as I thought it would be. I’ve seen men wearing it in South Asia and Southeast Asia. By no means is it common, but I see it. I have also seen many, many men all over the place with really long nails. It’s typically not all ten fingernails, but rather just a long pinky fingernail. I’ve heard everything from “I don’t know” when asking why this is, to being told that it’s a way for a guy to show he doesn’t perform manual labor.

I also see many men in South Asia with earrings in both ears. It seems like parents treat children as almost genderless until a certain age, and ears are pierced as part of the process. Many boys then stop wearing earrings at some point, but not all.

Man With Toenail Polish in Myanmar

Man With A Long Pinky Nail And Earring In Ranthambore, India

Then there’s the parts of the body we are attracted to. In Latin America the butt captures men’s attention more than anything else, far more so than breasts. I’d say it’s the opposite in North America, but these things are not universal as each individual has his/her own tastes. In South Asia it’s hard to figure out these things when women are so covered up, people don’t talk about these things, and I don’t know what goes on behind closed doors.

One thing I’ve seen, though, is that such differences in the perception of beauty make for interesting arbitrage situations. Since beauty is in the eye of the beholder,  you might find yourself in a part of the world where you find men or women completely attractive that aren’t paid attention to locally. I’d like to think that’s why I saw so many nasty old white men with beautiful, young women in Southeast Asia, but I think there were other reasons behind that.

Then there are adornments and jewelry. In all honesty, I can be the most observant person on the planet when it comes to some things, but when it comes to these things I truly don’t pay attention at all. Still, around the world jewelry goes way beyond earrings, rings, and necklaces.

In India, women wear a ring on both of their second toes (the one next to the big toe) to indicate they are married (among many other signals strategically located from head to toe, since men here are apparently extremely dense?). I guess that’s because the feet are generally easy to see in sandal-wearing India. Women also wear an elaborate necklace to indicate they are married, though safety concerns (these are generally made of gold) and inconvenience often means women no longer do this. Married women in Nepal and more traditional parts of India also put a red line where the forehead meets the hair, extending into the part between the two halves of your head.

In Myanmar women (and sometimes men) apply yellowish thanaka to their faces. Made of ground bark, it protects against sunburn and has skin-positive properties. But the main reason to use it is the believe that it makes you more beautiful. Women apply it in different patterns, I guess to help them look fairer and catch the eye of a suitor? Not sure.

Staying in Myanmar, there are many reasons Kayan women wear these golden neck rings, but one, of course, is that they say it makes them more beautiful. 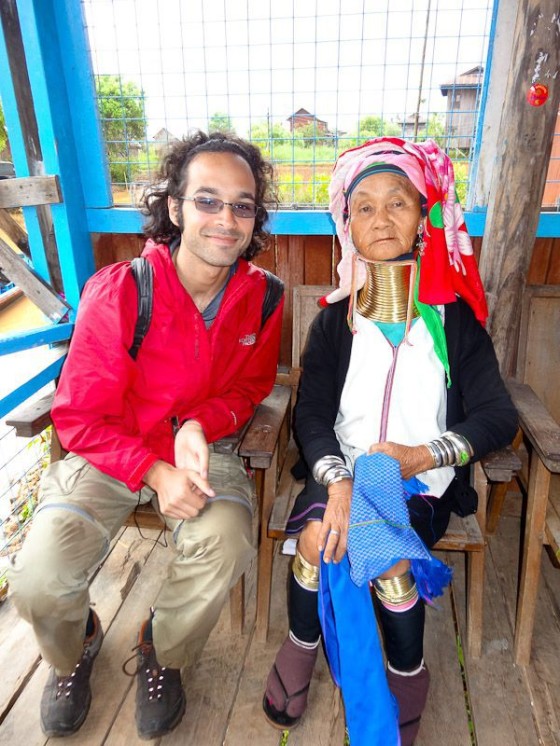 With A Kayan Woman In Myanmar

Though I don’t have pictures of these things, when I lived and worked in the Persian Gulf (UAE and Qatar) I also found very interesting notions of beauty. First, many women cover themselves from head to toe. Even though you could only see their eyes, hands (though not always, some women wore black gloves too), and feet, what you could see was exceptionally taken care of. Their eyes would be the most elaborately decorated you’ll ever see, no doubt spending as much time on them as other women might spend on their entire face. They often wore perfume, which was nice. And their hands and feet were often perfectly manicured/pedicured. If the woman only covered her hair but not her face, then her face was similarly made up with great attention to detail. For me, this is proof we’ll go to any length to appear beautiful, as the whole purpose behind the abaya (the black robe) and covering the body and face is to not attract attention to yourself.

Also from my time in The Gulf, I don’t know where they were from, Sudan maybe, but some women had what appeared to be Indian henna/mehndi on their hands and feet. But while in India application of henna/mehndi is a long, artistic process, these women just seemed to dip their hands and feet in a vat of henna/mehndi and call it a day. It seemed like the lazy way of doing it, but I’m sure there’s some aspect of beauty in there that I don’t understand as an outsider.

Let’s Be Happy Instead Of Beautiful?

Here in India it’s been quite sad to hear stories of girls growing up being told they’ll never get married (which is mildly equivalent to a death sentence) because their skin is too dark. In a place with a history as rich as India, one so deeply spiritual and conscious, it’s sad to see people with such skin-deep notions of beauty.

And it’s not an Indian phenomenon either. We’re all guilty of it to some extent. We all have biases or preferences. It takes a lot of consciousness to become aware of these things first, and then hard work to even try to overcome them.

I just wonder if beauty has lost its meaning if, in each place, we’re all striving for the same thing. Traditionally, it’s the differences among us that we are attracted to as it creates offspring with greater genetic diversity.

We all seem to want what we can’t have, going to great lengths to try and get it. We never seem satisfied with what we have, what gifts have already been bestowed upon us.

As you could see visually above, there is really no such thing as beautiful. It’s all relative and in another setting you might be the ugliest or most beautiful person around. But that notion of beauty comes from others. Focus on being awesome, living a life with purpose, and pursuing happiness!

Change Your Paradigm – How To Really Help People

Photo Friday – A Journey To The Center Of The Earth, Or A Tandoor Cooking...
Scroll to top