Kiev was the last city I visited in Ukraine. I had a flight from there to Kutaisi, Georgia. I was there at the end of August (2013) and my stay there was mixed with incredible scenery, horrid coldness, and diarrhea.

Ukraine was difficult to understand. Apart from the west of the country, it seemed like everyone spoke Russian. In Kiev it seemed the same, but it was hard for my untrained ears to know for sure.

Lviv and Odessa had their own vibe, but Kiev is by far the biggest city in Ukraine. The center is very walkable but distances grow rapidly as you leave the center. Luckily, there is a great metro system there. Rides only cost something like $0.25 and the trains are very quick. I heard there that although Saint Petersburg, Russia has the deepest metro system in the world, the deepest station in the world is in Kiev. Due to the city being hilly, some entrances take you far underground. See below for an example. You might need a few minutes on multiple never-ending escalators to get down to the platform.

As I said, Kiev is hilly. Many of these hills are punctuated by a beautiful church or monastery. Though they look simple, the colors and design are truly beautiful in my opinion. Maybe I’ve seen too many over-the-top European churches, but I think simple is beautiful. Below are some of these beauties.

From Kiev you can take a day trip to the city ruined by the Chernobyl nuclear disaster. It’s quite expensive so I didn’t go. There is a museum about the disaster in Kiev.

The museum is full of artifacts and exhibits. The radiation spread to so many places due to the wind, and sadly there was an exhibit called “From Chernobyl to Fukushima.” Some Japanese dignitaries happened to be there visiting the museum while I was there.

There was a map showing where nuclear power plants are active, where there have been incidents (including 3 Mile Island), and where nuclear tests have been conducted. Around the time I was visiting this story came out, showing how a simple switch prevented a nuclear catastrophe on the U.S. east coast in 1961. Crazy.

In Kiev I bounced between two different couchsurfing hosts. Both were amazing couples and I connected well with all of them. On my first day in Kiev my host’s shirt looked familiar. I realized it was “Om Mani Padme Hum” and I couldn’t believe it. My host in Odessa had a prayer wheel in his apartment with the same inscription.

First, what are the chances? Second, this song that I love is following me! 🙂

The people I met and got to know in Kiev were all very nice, personable, and friendly. Though it’s a big city, people seemed to be nice and not have a big city mentality. But your mileage may vary.

While I was in Kiev it was freezing. Ok, it wasn’t horrible, but after more than two years of continuous summer, a high temperature of 12C/54F and rain is the equivalent of winter for me. I don’t know if it was the change in weather or something I ate, but I ended up getting sick in Kiev. I had a temperature and diarrhea. It wasn’t as bad as this or this from India, but it kept me from seeing more of Kiev. As my diarrhea went away, a head cold replaced it as I got to Tbilisi, Georgia.

Here are some more pictures of Kiev. I hope you’ll agree that it’s quite beautiful, even if it can cause purple fingernails in August. 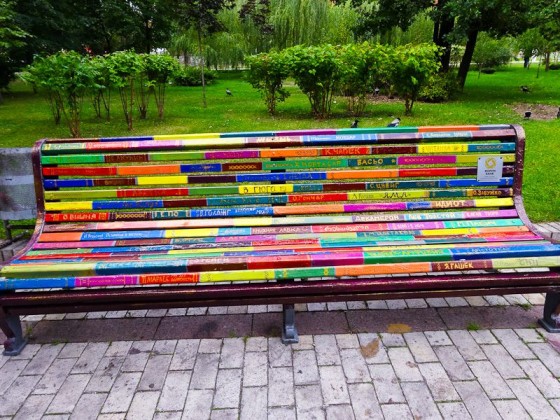