Though I called it Tblisi instead of Tbilisi for weeks until my friend corrected me, I really fell for this city and country. The drivers are a bit insane and the weather was quite crazy while I was there (random rain showers, very high winds), but it didn’t distract me from the beauty that is Georgia.

Europe According To Americans – The Caucuses = WTF?

I arrived in Georgia’s second-biggest city, Kutaisi, on a low-cost flight from Kiev, Ukraine. The airport is new and has no currency exchange office. I couldn’t get any Georgian Lari in Kiev, so I had no local money. I paid for a ride in a van to Tbilisi with my credit card in the airport. There were incredible scenes out the window for the duration of the 5 hour journey.

Since the Caucuses are full of conflicts, I had to visit Tbilisi twice. After visiting Armenia and The Nagorno-Karabakh Republic, I wanted to go to Turkey. But since Armenia’s border with Turkey is closed (so is it’s border with Azerbaijan) I had to go back to Georgia to enter Turkey.

The first time I was in Tbilisi I didn’t do as much sightseeing or going out as I should have. I was preparing and practicing for my upcoming TED talk in Armenia. The second time I was in Tbilisi I saw a bit more, but I was also busy trying to figure out where to go. My plans changed while I was in Armenia and I decided to visit the Middle East somewhat spontaneously since it had been out of the picture for a while by then. As I returned to Tbilisi a second time, feeling instantly at home, I wondered how I lived without knowing about this place before, experiencing its culture, eating its incredible food, and knowing some of its great people.

Georgia is full of incredible history and old ruins, churches, and artifacts are everywhere. You almost become desensitized to it, seeing 1000-year-old+ monasteries around every corner and on top of every hill.

Monastery On A Hill

You don’t become desensitized to the food though. First, the tomatoes in the Caucuses were, by far, the best I’ve ever had. I don’t know why, but they are juicier, less acidic, and a bit sweeter. I wouldn’t like eating a raw tomato in the U.S. but I happily ate them raw here.

But the star of the Georgian show is khachapuri. There are many different kinds of khachapuri but all involve bread and cheese. Some add an egg, vegetables, potatoes, and they come in all different shapes and sizes. To get an idea of how critical khachapuri is to the Georgian diet, khachapuri is used as a way to measure inflation in different Georgian cities. It’s called The Khachapuri Index and is published in the newspapers regularly. 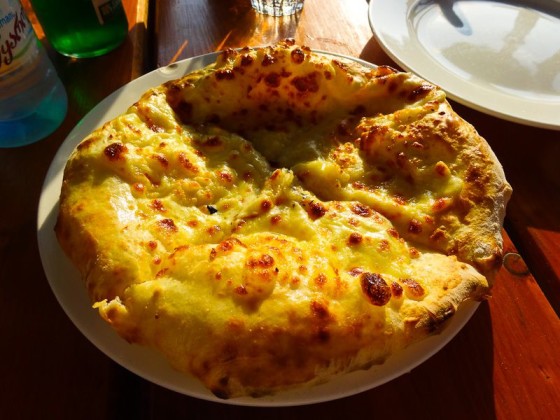 I don’t know which one was my favorite. The one I found most incredible in terms of preparation involves putting cheese around a skewer, then the bread dough is wrapped around the cheese. It cooks over a fire or coals and somehow the cook knows exactly when and how to remove it such that the cheese doesn’t stick to the skewer. It’s like a khachapuri kebab! 🙂

I went to a Georgian supra (feast) on the occasion of a birthday. At all such events there is a Tamada or toastmaster. It’s a serious job with centuries of history and precedent, where the toastmaster must ensure a harmonious evening while doling out respect and honor where it’s due. It’s an amazing experience even if you don’t understand all that is being said. All I know is that if I had taken a drink when each toast was made, I would have died of alcohol poisoning…twice! A virtual toast to all Georgian toastmasters for their dedication – and their livers!

And a virtual toast to a friend here whose mom created a feast for me. Georgian hospitality is quite incredible and I can’t even begin to think of the time and effort that went into making all this food. It speaks to the incredible kindness found here in Georgia and I’m incredibly appreciative.

Churchkhela is also food. I could have included it above, but it deserves its own spotlight. I first tried it in Cyprus in 2006. It’s called sucuk there, pronounced soo-jook. It was love at first bite. I brought two kilos with me, one I planned to eat and the other I planned to save for my family. Within a week both kilos had disappeared. As they’d say in Cyprus, “What can I do sometimes?”

When I discovered that I could find sucuk in The Caucuses it made me supremely happy. And not only could I find it, I found many more varieties of it here. I guess that’s a function of the fantastic varieties of grapes grown here, said to be the origin of the world’s wine industry.

Churchkhela/sucuk are prepared by putting nuts on a string and dipping the string into thickened grape juice. In Georgia it’s said that this was the perfect food for soldiers as it’s lightweight, full of energy, and doesn’t spoil.

All I know is that I can never get enough of these. Enjoy!

In A Shrine To Churchkhela

The city of Tbilisi isn’t the most beautiful or remarkable I’ve ever seen. It’s by no means ugly either. There are mountains surrounding the city and there are many places you can go to get a great view of the city.

Tbilisi is named after the Georgian word tbili, which means warm. Legend has it that the king in the 5th century shot a pheasant and it fell into a warm spring. The king was inspired to build a city on the spot and Tbilisi was born. There is a sulfurous river running through the city and there are some Turkish Baths alongside it so you can bathe in this so-called healthy water.

With George And Teona

While in Tbilisi I got to meet up with my two Georgian friends from business school. They went out of their way to ensure I was comfortable and had a great time. Georgian hospitality is incredibly beautiful and I really appreciated their efforts. Thanks Teona and George!

Below are some more pictures from Tbilisi!

Tradition Is Tying Plastic To A Tree For Good Luck 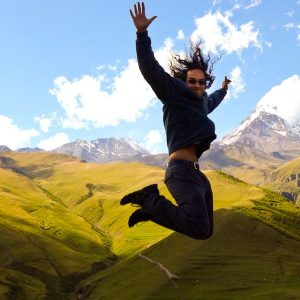