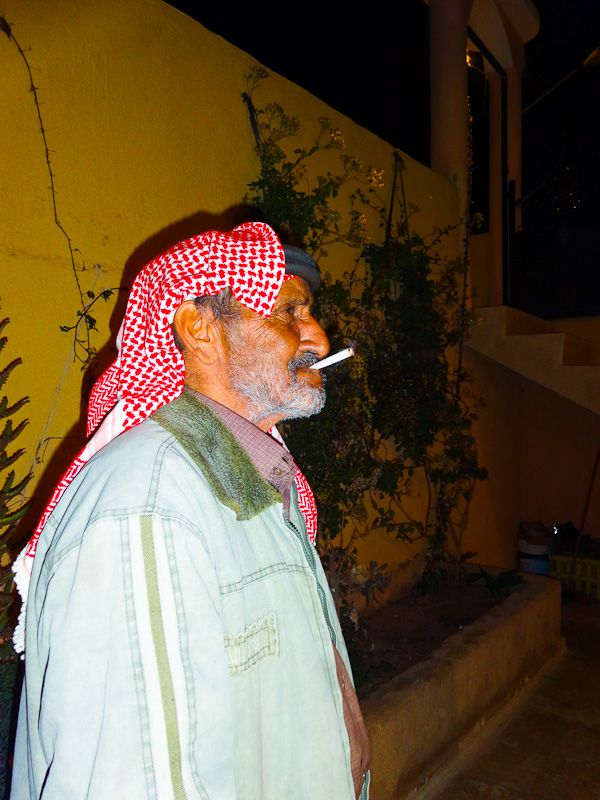 Not exactly, but I have a confession to make. Although I call myself The Happy Nomad, after meeting a man in Petra, Jordan, I now must revise that to “A Happy Nomad” at best. The man I met, Mefleh, is truly a happy nomad in every sense of the word.

While touring Petra my guide told us that there were many foreign women who have married Bedouin men. A New Zealander even wrote a book titled “Married to a Bedouin.” He went on to say there was even a guy who was married six times, three of which were to European women.

I heard this and thought little of it. Just an anecdote and for some reason I didn’t think the guy was still alive. After dinner the guide mentioned him again and something he said caught my attention – how happy he was. The guide asked if we wanted to call Mefleh and see if we could meet up. Of course I said yes!

We left the restaurant and met Mefleh in the Bedouin village next to Petra. The government built apartment blocks and homes for the Bedouins to facilitate their removal from living in Petra. Not all left, however.

We met Mefleh on a corner. He was at a supermarket and he walked us back to his home. Mefleh is at least 60 years old though his face sometimes tells a much older story. The harsh sun, no sun glasses, and Bedouin life have taken their toll, though his dynamism and spirit quickly steal your attention from his weathered face.

When entering Mefleh’s home he introduced us to his wife. I don’t remember him using her name, but immediately the guide said “This is number six.” I felt like it was quite disrespectful but it inaugurated a night full of laughter and memories.

With Mefleh In His Garden

Mefleh’s second wife was Swiss. I don’t know how he met her, but they got married and had a daughter. Mefleh showed us many pictures with his family in Switzerland and Petra from the 80s and 90s. Though he may have lived in Switzerland, his heart was always in Petra and his mindset always that of a Bedouin. For example, he drove from Switzerland to Jordan, through numerous countries, without a driver’s license. He arrived in Petra and the car died exactly in front of the Siq (the treasury building Petra is famous for). He sold it to another Bedouin for nearly $1000 and happily walked back to his cave.

He showed us pictures of his cave. It’s not a cold, rustic place as you may think. It’s colorful since he painted the inside walls (which is possibly a crime since it’s a protected area, but his family has probably lived there for over 1000 years). There are windows carved out of the rocks, curtains, a garden, etc. It was beautiful.

The part that made us all laugh was when he talked about the bathroom. It’s detached from the rest of the home, which is normal when living in the countryside for hygienic reasons. But while there is a real bathroom there, there is no ceiling and the walls have windows. He said it’s important to have a good view while taking care of businesses. While Petra is incredibly beautiful and inspiring, I don’t know how much that helps with the body’s plumbing.

As that should indicate, Mefleh loves nature. I asked him what happiness is to him and he said “being free.” Sounds good. He actually kept asking me if I was happy while we were there. I kept saying “Of course I am!”

Mefleh’s wife gave us tea and cake. They make tea here with mint leaves. I don’t mind normal tea, but when it has mint leaves I actually enjoy it. Mefleh also had a British wife, but that marriage didn’t last very long. He didn’t want to talk about her. He had a French wife as well. His current wife is in her 30’s. She is a Bedouin from northern Jordan. I don’t know how they met.

Though Mefleh is quite famous among the Bedouins, he is not nearly as well off as his Bedouin brethren. When the government built the city for his tribe to live in he was abroad in Switzerland. So he is actually renting his home in town. He prefers to live in the cave but his wife prefers the city with its modern conveniences (tv, washing machine, etc). I didn’t fully understand how he earns a living, but he charges tourists for tea when they come to his cave. His cave is listed in some guide books. Perhaps his daughter, who is living in Switzerland, also helps out. I don’t know.

Unfortunately he and his daughter don’t have a language they can fully express themselves in. She doesn’t speak much Arabic and he doesn’t speak much French. He speaks basic English well, but not well enough to get across nuanced thoughts or feelings. I guess they find a way to make it work.

Something hard to get across here is just how happy Mefleh is. He knows what makes him happy and intentionally works toward maximizing it (living in Petra, being in his cave, tending to his garden, meeting with friends and being hospitable to tourists). He gives the impression that he is constantly bombarded by requests from women to be with him, but I sense that is a bit of ego-stroking. Still, he is so full of energy he could barely stay seated while we talked.

I think I found “The Happy Nomad.”

A Love Letter To Halloumi Cheese

Some Of Jordan’s Incredible Sites

Intro To Davao, Philippines – A Robbery And A Community Response