Davao is said to be the safest city in The Philippines. I don’t know if that’s true or not, but what you’ll see below makes it easy to believe.

On my first day of walking around the city, I was walking down J.P. Laurel Avenue. It’s the main avenue that goes through the city.

All of a sudden I saw a guy running past me to my right, going right into the street where cars were stationary waiting for a light to turn green.

Ok, a guy running. Not so normal on a city street at 1pm under the blazing hot sun, but not so rare. But I realized he had a bag in his hand, kind of like a fanny pack or small purse.

Yes, a hoard of 30 to 50 men ran after this guy. I immediately realized it was a robbery in progress and took this picture of some students dressed in their uniforms running after the guy.

Vigilantes Running After The Thief

I didn’t get the video recording fast enough, but the video below sort of shows the crowd running after the guy and people from along the side of the street coming out to see what was going on.

As I walked down the street, I saw that the guy had been caught. In fact, I saw him punching the security guards that had subdued him. And I saw the men following to make sure he didn’t get loose again as they presumably waited for the police to come and arrest him.

After I turned off the first video, and before I saw that the guy had been caught, I saw victim. She was crying and holding her head. She was talking to a security guard who was staying with her as the drama unfolded. They were speaking Visaya so I don’t know what they were saying.

I don’t know if she fell down during the incident, or if he hit her, or if was just so upset and frustrated that she was grabbing her head.

Either way, it’s still sad that such things happen. This could have happened anywhere (like Cebu), but in some way it reflects well on the people of Davao that they will not stand for such behavior in their community. 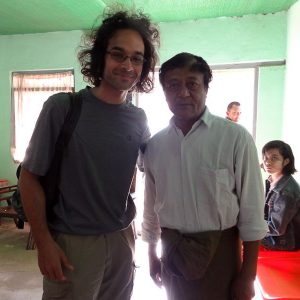 Stuck In The Middle Of Ethiopia – 4 Days On Buses For One Day In Lalibela!

A Story Of Kindness Representative Of The Philippines