Samal is the island paradise right across a narrow strait from the city of Davao.

And for many, that’s the end of the story. Below are some pictures of paradise.

The Other Side Of Paradise

If you know anything about me by now it’s that I like to explore the other side of things, questioning the status quo. And Samal has a very un-paradise-like story going on at the moment.

I was invited by a family living among the indigenous community of Samal in Barangay Tambo. Barangay means village. They wanted to share their story with me.

Samal is home to an indigenous community that traces its roots there for generations and generations. Sadly, they are under threat.

Land developers have usurped a lot of land on Samal using some antiquated law meant to protect people living next to the sea. The result has been new beach resorts created often by foreign investors, with the local inhabitants finding themselves homeless and helpless.

The same is true in this community. They have a buffer community next door that is being eyed by developers. That community is currently fighting for its survival, but everyone in Tambo knows that they are on the radar as well – probably next.

The activist politely asked the official to go to Google Maps, switch to satellite view, and zoom in on Tambo.. hectares of mangrove trees..

Mangroves Cut For This Bridge

Unfortunately, it’s a familiar story. I saw the same thing in Cambodia. The government seized land, gave it to developers, and left the land’s original inhabitants out to dry.

To do something positive, we planted some mangrove trees while I was there. They grow quickly and are instrumental to keep the local ecosystem vibrant. The mangroves shield the community from harsh winds in the windy part of the year, act as a natural filter against garbage washing up into their communities, and stimulate fish and crab breeding.

Where is the line?

I visited two resort beaches on Samal. They were neither fully occupied, nor busy. How many resorts is enough there? At some point, the capacity of the resorts will be too much for the demand, prices will fall, and everyone will lose. But the original inhabitants will have lost from the start.

For me it’s kind of an allegory of where humanity is going – placing the acquisition of wealth above all – even the very existence of the planet. Similarly, operating by a strange definition of progress where destroying a sustainable way of life to provide a place for the parasitic way of life to relax… seems strange.

I don’t think the local people in Davao would patronize a resort built on land stolen from its original inhabitants. But sadly, most people who live in Davao don’t even know that there are indigenous people there or what is happening to them.

So, that’s what I recommended the people of Tambo do. Instead of trying to take their case to the supreme court or UN, which they are doing, they should work on educating their extended community of their existence and their struggle. Davao is an amazing community and I am 100% sure they won’t stand for this.

I won’t either, but I’m a writer not a fighter.

Below some other pictures of the community.

Baby In A Hand-Made Stroller

Protecting A Way Of Life

With The Village Chief

My Heart Is With Tambo 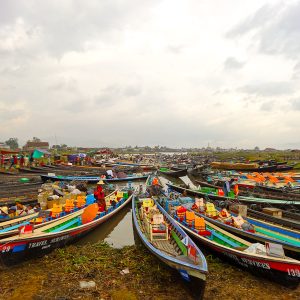 Pushing Yourself To Overcome Fears
5 replies

What Do 1.8 Million Bats Look Like?
Scroll to top