You may be aware that Mother Teresa had a home for old people to die in comfortably and with dignity in Calcutta, India, as well as a home for sick and malnourished children. What you may not know is that these homes are all over the world – in 133 countries to be exact.

When I decided to go to Davao, I was told about an orphanage that someone was going to volunteer at. She’d give me more details in the future. In the end, it was a Mother Teresa home for sick and malnourished children and I volunteered there too.

I don’t know anything about making sick kids healthy or making malnourished kids nourished. But I know that the kid:adult rate is always unfavorable in these places and the kids are starved for attention. So I went to lend my attention, heart, and warm skin to the kids and babies there.

My first day was the hardest, I think. I saw so many beautiful children who were either so sick or so alone in this world. I met a bedridden baby who I thought was, at most, two-years-old. Then the caretaker told me he was eight and my whole world got turned upside down.

After the first day I stopped seeing the kids as sick or as patients and more as wonderful little human beings.

I held the babies and took them on walks. I never understood why they liked looking at or touching certain objects or even a bare wall, but I was always happy to oblige – though my first day I took Jenna Mae on a walk and she rewarded me by pooping on my arm. She had a diaper on, but somehow some poo particles leaked onto my arm.

I wrote my mom a text message immediately telling her that she shouldn’t expect any grandkids after this drastic incident, but she just laughed it off. I did too. Not a big deal, but it was the first time I’d ever been pooped on by a human. This albino peacock pooped on my head in Mexico on my first day of The Happy Nomad Tour!

The older kids were a bit more difficult, but generally just wanted my attention and the slightest bit of effort on my part to play with them made them very happy.

All the kids loved my hair. The eight-year-old boy mentioned above loved it the most. On the first day he noticed my hair bounced and moved. So he sat in his crib and moved his head back and forth as it if he was saying no with some authority. But I realized he wanted me to move my head back and forth so my hair would move.

He laughed like it was the funniest thing in the world. His whole body got involved with the laughter. It was wonderful.

And every day thereafter, as soon as I came in he would start shaking his head back and forth. I tried to get it on video, but every time I pulled out my camera they’d become fixated on the camera instead of behaving normally 🙂

I didn’t take many pictures or video because you aren’t supposed to there. But I took a few to remember the place and the wonderful children.

As you may have noticed, I kind of fell for Jenna Mae. She’s four though she’s essentially a baby. Sometimes she’s playful, constantly 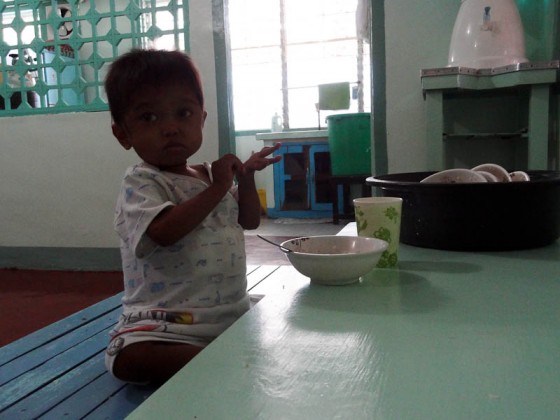 smiling, and a joy to be around. Other times she’d put her hand by her ear and swat at any attempt to get close to her.

I never figured out her moods, but maybe that’s an allegory for life and my quest to understand women in general 🙂

One other cool thing happened. A Filipino friend of mine living in Norway sent me some money so I could donate it to the home on her behalf. The nuns were very grateful for the donation.

In the end, a great experience full of learning that I can’t put into words and a sharing of love that can only be felt.

Why Are We So Judgmental?

“Happiness” In The Philippines
Scroll to top