After finally reaching the ashram a day late due to some confusion with two cities having almost the same name near each other, I arrived at the ashram, called Ananda Marga.

The first thing I noticed was the uniform the monks wear. It’s an orange robe, orange turban, and they all have long beards. As the rickshaw figured out where I was supposed to go, I passed institute after institute, student hostel after student hostel, school after school. This place was huge!

As I sit down to write this post, I’m still not sure how to put my experience into words. On the whole it was good, but it wasn’t what I expected. I found myself sad to leave, but I didn’t know exactly why.

The Guru And His Altar

Ananda Marga was started in 1955 by Prabhat Ranjan Sarkar, also known by his spiritual name Sri Sri Anandamurti. He is the guru or baba of the ashram. It has spread to over 100 countries.

The two main tenants of Ananda Marga are meditation/spirituality and social service. Their motto is “Service to Humanity is Service to God.”

They embody the notion of social service. This is actually how I came to know of Ananda Marga. The two ladies I volunteered with at Sunshine School in Laos are members. In this way, I have infinite respect for the monks and nuns at Ananda Marga. They do the heavy lifting in the work of uplifting society and, as per their beliefs, minimizing the suffering in humanity.

The part of the ashram where I was staying is called AMURT, or Ananda Marga Universal Relief Team. They provide relief when necessary, often due to natural disasters (floods, earthquakes, hurricanes, etc.) and man-made disasters (war).

The ashram is located in a village called Ananda Nagar, which in Hindi means Happy Town. You can see where it is on this map. The Thai Temple was quite rural, but Ananda Nagar is the real deal. Apparently, the land was given to Sri Sri Anandamurti by the local king in the 1960’s. When the feudal kingdoms collapsed after India unified, the former kings still got to keep a lot of their land.

The monks are called dada (brother) and the nuns are called didi (sister). But men and women are generally kept separated. Celibacy is one of the virtues monks and nuns must live by. Reducing temptation helps. Similarly, the diet is removed of anything that has aphrodisiac properties. Garlic isn’t eaten, for example. But otherwise, the diet is entirely organic and vegetarian. I learned more about cooking here than spirituality in all honesty.


As a foreigner there, everyone assumed I was a dada. People would salute me with a namaskar and call me dada. I replied back in proper form. The best memory from the ashram is the children. They’d greet me with a namaskar, clasp their hands together, and then we’d talk. Most were attending English-language schools at the ashram and we could have conversations. It would always be about something different, but each one was meaningful in its own way.

Namaskar With My Teacher

This ashram is open to visitors, I guess, but by no means is it a commercial operation. I think all dadas would be happy to share their knowledge about meditation and yoga within reason. In my case, it came in the form of a five minute lesson on meditation. My dada needed lots of digital help and I helped him edit the memoirs he wrote, fix email issues, and more. He just didn’t seem all that interested in teaching me though.

Their form of meditation was quite different from the meditation at the temple in Thailand, and no snakes or dead bodies were involved. In the end, both forms of meditation served the same purpose though.

The dada I was paired with was with the guru from the start. He had all kinds of amazing (far fetched even?) stories. I think this might be characteristic of all ashrams here in India. They all feature a larger-than-life guru/baba. Even if you suspend disbelief, it’s still hard to accept all the things you’ll hear. I knew this going in, and hoped to focus purely on learning how to meditate.

The symbol or of Ananda Marga is below.

In many of my pictures from India there are swastikas. The swastika predates Hitler by about 12,000 years. By no means is it a Nazi symbol, though in the West it’s generally the only exposure we have to it. In reality, you see it everywhere in India and Buddhist/Hindu countries. The word swastika comes from the Sanskrit Su+asti+ka which literally means “to be good” or “to be auspicious.” It is interpreted to mean “being with higher self,” so it has a very deep spiritual meaning.

So, I implore you to give the swastika another chance. Evil adopted it as its logo, but by no means is it an evil symbol. In fact, I remember trying to explain to a girl in Vietnam why it probably wasn’t a good idea to get a swastika tattooed on her wrist.

The logo is composed of an upward and downward pointing triangle. The downward one symbolizes inner development (meditation) and the upward one symbolizes action to uplift humanity. The two triangles can be thought of like yin and yang, where balance between the two is the goal. The rising sun symbolizes progress, which comes about from leading a balanced life. The swastika symbolizes becoming good, which I explained above.

The small antenna on top.. I presume it’s for communicating with aliens. 🙂

The ashram is next to the small town of Pundag. I was lucky enough to be able to visit the local market one evening. What an experience! It was so colorful, lively, and cheap! By far, this locally-grown food was much cheaper than the already cheap food here in India.

I became close with one of the dadas at AMURT. Our friendship just kind of developed naturally. He cooked all the meals and I was happy to be his official assistant. Sometimes he’d take me on a walk and show me new parts of the ashram. I don’t know. It was just very nice.

The day I was leaving, I went to my room to pack my things. He came and sat down and said “I’m going to miss you. I had fun cooking with you and taking walks.” It might sound creepy, but it was from the purest and most innocent of origins. I felt the same to be honest. It had been nice and I was going to miss him as well. We took this picture a few minutes after he told me that and I told him he could work on the side as an Indian Santa Clause. You be the judge.

Maybe it’s inevitable to ask this question. Is this a cult?

You are not alone. I asked myself the same question daily. Let’s look at the aspects that clearly seem to resemble a cult:

Are there more things? Probably. I wasn’t there very long and I’m sure the deeper you go the more things you’d find.

Still, in the end their mission is to alleviate humanity’s suffering. It’s a good mission. But all religions have good missions that have been abused to perpetuate suffering and war. So I don’t know.

I was surprisingly sad to leave this place. It was so calm, so peaceful. I had hoped to learn more, but the more I’m in these environments the more I realize the answers I seek probably can’t be found in an ashram or temple. They’re within me and I have to keep digging to get to the bottom of, well, everything.

Below some more pictures from the ashram. 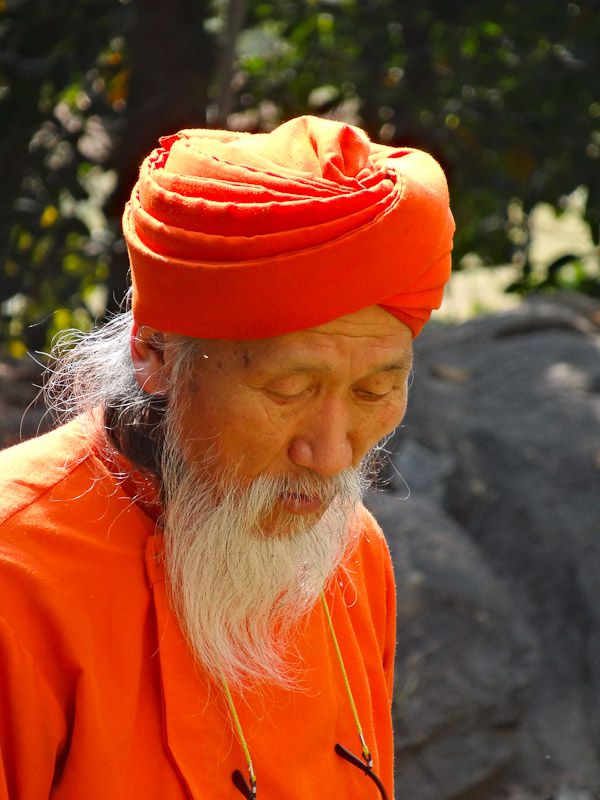 Monks In The Garden

My Roommate Playing Hide And Seek

Residents Of The Village

Residents Of The Village

Soccer On A Makeshift Soccer Field

Sunset At The Ashram

My Bed (A Wooden Table)

Laughing In The Face Of Violence In Kochi, India

Photo Friday – What Is Your Mission? – Bombay, India
4 replies

Photo Friday – A Cyprus That Could Have Been – Karpaz, Cyprus
Scroll to top