It’s a conversation I’ve had far too many times since visiting Somalia in December 2013. This article will serve as a record of my experience, and perhaps a gentle nudge that you too should visit!

I got to Somalia by taking a buses in Ethiopia from Addis Ababa to Harar (where I spent some time) to Jigjiga and then to Wajale. At Wajale you go through immigration and cross the border where you then take a shared taxi to Hargeisa, the capital of Somaliland, the autonomous region of northern Somalia. The shared taxi was a bit uncomfortable with four adults sitting in the back row of a minivan, but the guy next to me was incredibly nice. He’s lived in Finland for the past 25 years and provided a great introduction to this interesting place.

The Ethiopia-Somaliland Border – A Thin String

Somaliland is an autonomous region in Northern Somalia. It was a British protectorate until 1960 when it joined with the neighboring Italian protectorate to form the nation of Somalia. In the events leading up to the Somali civil war, in 1988 the leader of Somalia committed massacres against the people of Somaliland. It left the infrastructure and economy in ruins and many people fled. That year they declared independence from the rest of the Somalia and have maintained it ever since despite no other governments in the world recognizing it.

I couldn’t help but think of Iraq while I was here, with a north and south that are vastly different. But in Iraq the division is along ethnic lines (northern Kurds and southern Arabs). Here it is not. But the results are much the same. The north of Somalia (Somaliland) enjoys greater prosperity and safety than the south, just as in Iraq. The people of Somaliland see themselves as Somali, with the Somaliland-Somalia division purely artificial (or political). Still, Somalilanders are thankful they live where they do, as the rest of Somalia is comparatively much less safe.

There is not much tourism here, as you can imagine, so it was a real treat for the local people, especially the children, to see this brown guy with crazy hair walking down their streets. Many of the children engaged me in conversation with the limited English they knew and many smiles were generated as a result. In Ethiopia I was constantly engaged by children begging for money. This almost never happened in Somaliland (only once when I exchanged money on the street and locals were quick to step in and make him go away).

People would often shout at me as I walked down the street. They were just trying to get my attention to engage me in conversation. They are curious, wanting to know where I’m from and what I’m doing there. It’s harmless, but it comes across as quite abrasive. Where I come from you don’t yell at someone you don’t know walking down the street unless there’s a good reason. 🙂

The people are very honest and the man in the shared taxi told me on the first day I need not worry about getting cheated in Somaliland – a welcome change from Ethiopia and so many other places I’ve been. And he was right. People were very honest with me from the beginning and whether exchanging money or buying fruit or water on the street, I got local prices.

Speaking of the street, given the civil war I expected to see many wounded people with missing limbs like I saw in all the Central American countries that fought civil wars in the 1980’s. I didn’t see any, though. No beggars either apart from the one while exchanging money.

At one point I was walking and a guy who spoke some English approached me. We started speaking and he seemed ok. But all of a sudden everyone within a 10m/30ft radius came to my “aid.” They were all speaking Somali, but one of the guys said “bad man” to me. I don’t know. Maybe he was mentally disturbed. But it was really, super nice for so many people to intervene and help me out when I suspected nothing was wrong. Nothing probably would have happened, but they all went out of their way to ensure this was so.

There are many family businesses here, but I think a lot of income comes from abroad. Due to the civil war many, many Somalis fled to Europe, the US/Canada, and Ethiopia. They support their families back at home. This has become increasingly difficult due to Somalia often showing up on lists of countries that harbor terrorism, and as a result many companies that facilitate money transfer everywhere else in the world have stopped doing so in Somalia and Somaliland. Here is a recent article from an NGO advocating these restrictions be lifted and here is a story that humanizes this dilemma.

When I say I’m from Ohio to people abroad, many people have heard of it but know very little about Ohio. Perhaps they remember that we were the deciding state in the 2004 election, maybe they’ve seen the Drew Carey show, or maybe they remember Ariel Castro’s sick story of kidnapping three girls for years and years. But in Somaliland and Somalia, everyone knows Ohio. I think Minnesota has the highest concentration of Somalis outside of Somalia, but Columbus, Ohio has one of the biggest Somali populations as well.

Somaliland has its own money, called the Somaliland Shilling. Up until recently a 500 Shilling note was the highest denomination. 500 Shillings is equivalent to $0.077. Thus, to buy something that costs $7.70 it would require 100 500-Shilling notes. People had to carry around massive bricks of cash to make the most mundane purchases.

Today there are 1000 and 5000 Shilling notes that help out (though 5000 Shillings is still only $0.77). More importantly US Dollars circulate side-by-side the Shilling to facilitate larger purchases with greater ease. The exchange rate in stores is generally 6500 Shillings per dollar, but on the street you can find tons and tons of exchange guys who give you 6800 Shillings per dollar. You can see one such exchange guy below. He’s sitting next to several other exchange guys, all with tremendous amounts of money in front of them. Would it be safe where you live for people to sit unarmed on the street with this much cash? It is here…

With The Money Changers

With The Money Changers 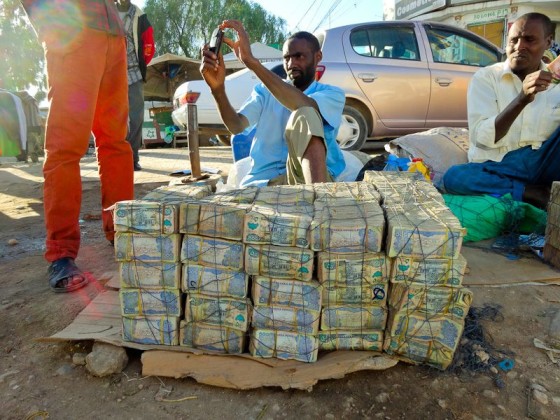 While I was there, mangoes, oranges, and guavas were in season. The mangoes were incredible. They were gigantic and tasty. Sadly, the hotel I stayed at served amazing freshly-made mango juice for only $1 but I found out just before leaving. I had some Somali food, but it was all heavily meat-based so I didn’t care for it too much. It didn’t seem like chicken was all that popular. Beef, goat meat, and camel were all much more common. In East Africa in general, chicken is much more expensive than other kinds of meat. I don’t know why.

You can’t buy alcohol in Somaliland and it didn’t seem like many people smoked cigarettes. Instead, chewing khat/qat is very, very common. Street stalls selling it are everywhere. Most of it comes from Ethiopia. Banned in most Western countries, its affects are said to be milder than alcohol and smoking. It’s not addictive either. It reminded me of people chewing paan in India/Pakistan/Myanmar or the indigenous people of South America chewing coca leaves. Like coca leaves, khat has hunger-suppressing qualities.

He Asked Me To Take His Picture

Somaliland has few things in the way of tourist sites. There is the cave complex at Las Geel and some shipwrecks in Berbera. You can also do some hiking in the Sheikh Mountains. I read different accounts online, but it seemed like I could do all these things without an SPU (security policeman you take with you upon leaving the city for your protection). But that wasn’t the case when I was there. I went to the ministry of tourism to get the permit required for Las Geel and they told me I do need an SPU. If I couldn’t use public transport, basically going anywhere was prohibitively expensive. I couldn’t justify spending $215 in one day to visit Las Geel and Berbera – more than it cost me to visit Machu Pichu, Angkor Wat, and Cappadocia combined. Instead I went to the local camel market and had a great time there 🙂 Such are the trade-offs of traveling on a budget, as I really would have liked to visit Las Geel and Berbera.

In the absence of touristy things to do, all you can really do is relax, people watch, interact with locals, and absorb a different way of life. I really like doing this, so it was enjoyable for me.

Although there were very few paved roads, even in the capital Hargeisa, generally the supply of water and electricity was superior to what I experienced in Ethiopia. Overall hygiene and cleanliness was far better as well, though I have found that generally Muslim countries tend to be comparatively hygienic since cleanliness is a part of the faith.

All in all, a wonderful adventure and I’m so, so glad I went to Somaliland. After traveling this long, few things surprise me, but I did leave feeling surprised how comfortable I was there and how much I liked it. 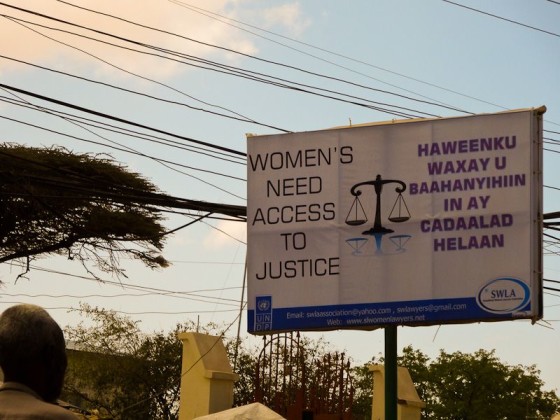 I Need To Train Better, Apparently

Worst Border Crossing Yet – The Not-So-Welcome To Panama Experience

Visiting A Camel Market In Hargeisa, Somalia
Scroll to top